As per the genealogy links below to the hand-drawn family trees meticulously draughted by my late Uncle Alexander (Sandy) Waddell, and the various biographies that Sandy put together from various sources, plus a rather entertaining diversity of family letters that have survived the years (including a most impressive Invitation to the Misses Little from the Maharajah of Johore, requesting their company at dinner, in order to meet the Rajah and Ranee of Sarawak).

The biodates (ie from birth to earth) were noticeably incomplete (as of Feb 2014), but they have been augmented (and where necessary, of course, corrected), using the extensive and authoritative material that has recently become available to me by the kindness of my newly-revealed fourth cousin Simon Potter, a direct descendant of the patriarch of the family, Rev Robert Little, Minister of Applegarth.

The table is curtailed after the (-3) generation in which Margaret Little married James Waddell, my great grandfather, as the tabulation would become too cumbersome and indeed the relationships with the Waddell Connection would be too tenuous by that stage. And, indeed, I've omitted some marriages even in that generation, that strayed outside our family focus.

If you're just browsing rather than checking dates and suchlike, the hyperlinks in bold font are likely to be especially colourful. And since so much of the Little family history is centred on the extraordinary city of Singapore, let's catch a preliminary glimpse of its remarkable political architect and the legendary city-centre oasis, eponym and icon familiar to generations of travellers and empire-builders. (not to mention renowned authors such as Ernest Hemingway and W Somerset Maugham).

I'm extremely grateful to Robert Dalgliesh [Mar 2016] for very helpful information regarding Dr WilIiam Margaret Dalgliesh and his family, much improving their dates and my spelling!

Great significance was attached, in the Waddell family during my childhood at least, to Miriam Anne Little (1875-1954) and her sister Hilda Maxwell Little (1878 -1966), daughters of Matthew Little (1827-1902), having attended as witnesses at the marriage of Robert Waddell and Hannah Findlay on 22 Apr 1912 in far-distant Seattle.

This was undoubtedly because, a generation earlier, Margaret Little (1858-1940), daughter of Dr Robert Little (1819-888) of Singaporean eminence, had married Robert's father James Waddell (1846-1907) on 5 Mar 1881. Later in life she became known as 'Old Grannie', and was greatly revered throughout the family connections.

I've noticed several books of nostalgic anecdotage about Singapore and its imperial heritage:

Tales of Old Singapore: The Glorious Past of Asia's Greatest Emporium, by Iain Manley

And there are also some heavyweight histories (very readable nevertheless), such as the two-volume centenary narrative that Uncle Sandy evidently made frequent use of: 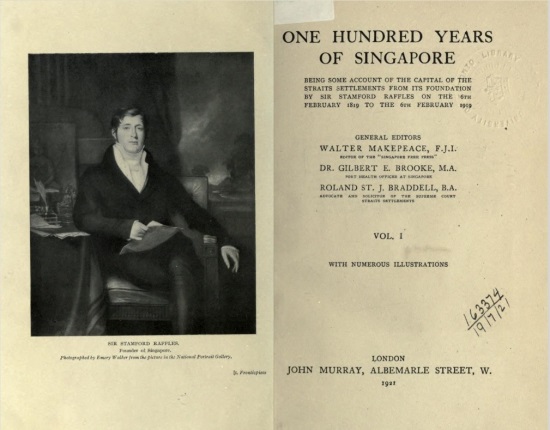 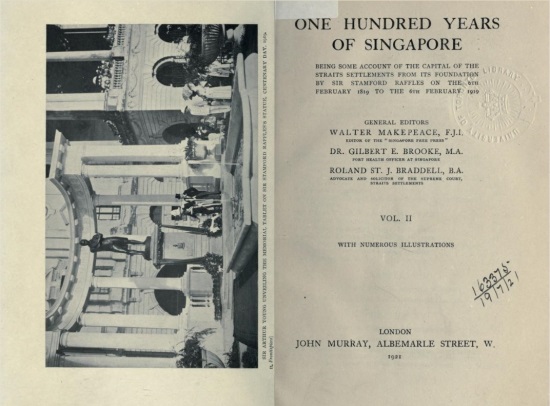 And this rather older two-volume opus: 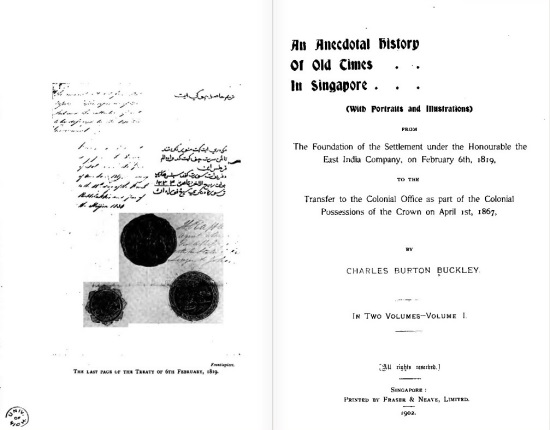 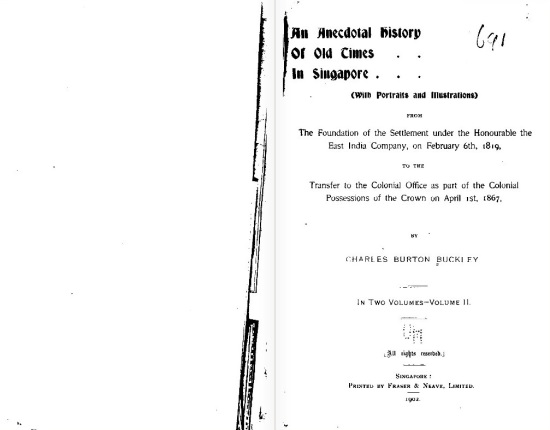 I'm extraordinarily grateful to Dane Wiren (Dec 2016), who has just provided a first-hand footprint of the generation preceding the Rev Robert Little, and an unprecedented revelation of Robert's brothers and sister, in the form of a letter home from their brother George, back in 1779.

I suspect that George had been the black sheep of the family, and had been encouraged to redeem himself by seeking his fortune as a merchant in the British colony of Jamaica, and deeply involved in the so-called triangular trade, with some up-front capital provided by his brothers. Some redemption, we would nowadays say.

The letter is addressed (on the outside, no envelope in those days), to his father, Mr Peter Little senior, evidently a farmer in Lochmaben, but directed via his brother the Rev Robert (probably to ensure the widest-possible informal dispersion around the family, of what he has to say).

What can we deduce about the rest of the family?

thereby generating a brand-new topmost row of the Generation Table.

When sitting down at my desk this morning (Oct 2018) I had no idea that this unpremeditated section was going to urge itself forward. But it has. A most extraordinary book, Miss Hargreaves, which nobody but my Aunt Jane and I have ever read, was a paean to the creative power of the inspiration of the moment – delay and you lose it. "Creative thought creates"...

It's very English, written and set in post-war austerity, with a backdrop of a second-hand bookshop in a small market town, and the Anglican cathedral ... an England that died in the 1960's as the vulgarians gained ascendancy.

I read it at the age of about 10, when I was living in Chichester, and it has echoed unceasingly ever since, though at the time I didn't understand why her parrot was called Dr Pepusch.

Well, I must get back to basics and explain that the obtrusive inspiration was a rather exotic genealogical tree (due to Simon Potter, and already featured in a different context) but with particular relevance to the back-history of the Little family, inasmuch as it featured a backdrop to Barbara Anne Cleghorn, wife of the fabled Minister of Applegarth, the Rev Robert Little, the touchstone of family decency ever since.

Assuming that you've clicked and scrolled appropriately, you'll have seen quite a reassuringly clerical pedigree on her paternal Cleghorn side and a slightly alarming Orkney provenance on her mother's side. Well I quite like an Orcadian connection, as that's whither an Erskine ancestrix of mine was once banished for murder, but it's got to have credibility.

Sadly, Matthew Cleghorn's wife Euphemia (though, like Caesar's wife, herself above suspicion) seems to have emerged from an imbroglio of Grahams and Honymans (the latter of whom are well documented, but the Grahams' record is seriously underwhelming – Simon Potter has always been tremendously knowledgeable and helpful, however, so I'm happy to take it on trust).

I must say that one admires Elizabeth for breaking ranks to marry a brewer!

And it has to be remarked that these two geni.com sources do tie in quite closely with Simon Potter's reckoning of Bishop Graham's descent, just miscounting by one generation:

which makes Robert Graham in fact the great-great-grandson of Bishop George Graham of Orkney.

So is everything in the garden as lovely as it looks? Well, not quite... 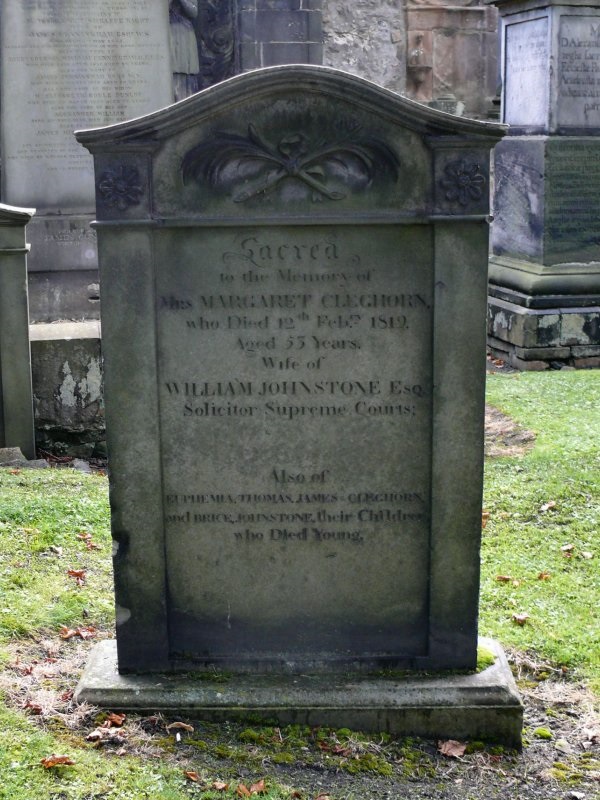 The inscription is quite hard to read, but the Edinburgh Kirkyard evidently provides a narrative these days:

All very well, but it's obviously been put together by a GCSE drop-out. The inscription actually says

Sacred
to the Memory of

We don't have a picture of her husband's gravestone, but again there is a narrative provided by the Edinburgh Kirkyard:

which is all very well in its way, but presumably neglects to say that by a later marriage to the widow Mrs George Patton he became stepfather to her children William and Janet Patton.

This is all just nit-picking however. The real issue is about her age (which on her gravestone could be read in several different ways as 5 and 3 look very similar on a weathered slab of stone). Margaret was actually born on 2 Jul 1765, if the geni.com website is to be believed, and at her death she would have been 46.

Perhaps people then were just as innumerate as people are today.