Or rather, in the vast majority of cases, fizzles. In the English-speaking world, only Locke, Berkeley, and possibly Hume, have had any degree of staying power. French philosophy is notoriously so abstruse as to be a contradiction in terms, and its German counterpart is no better. Certainly, the names are often well-enough known, plus one or two platitudes, but who would say of any one of them, that his philosophy was a constant inspiration in their life, Φιλοσοφία Βίου Κυβερνήτης (Philosophy is the Guide of Life, as the Ancient Greeks averred)?

Kant’s categorical imperative, that one should act only on that maxim through which you can at the same time will that it should become a universal law, is a good candidate as Phi Beta Kappa, but it is a pale echo of Christ’s "Golden Rule" that "... all things whatsoever ye would that men should do to you: do ye even so to them: for this is the law and the prophets".

Or as Charles Kingsley put it more pragmatically in The Water Babies, "Do as you would be done by, lest you be done by as you did".

Indeed, apart from matters relating to religion, the New Testament in particular, it could plausibly be argued that anything that is worth saying at all, was said first by the Greek and Roman philosophers, and the distinguished modern philosopher Alfred North Whitehead held the opinion that "The safest general characterization of the European philosophical tradition is that it consists of a series of footnotes to Plato".

The word ‘philosopher’ does of course mean lover of wisdom, and wisdom does imply something that is acquired through experience, by careful observation of people and events, and the world around us. It is not something that can be acquired in a classroom, which was why the Sophists, itinerant educators, snake-oil salesmen, prominent amongst whom was Protagoras who proclaimed that "Man is the measure of all things", were so despised by the established philosophers such as Socrates, Plato and Aristotle who sought for objective truth.

During my stop-over in (modern) Athens in 1964, I acquired, and read intently, Will Durant’s Story of Philosophy – probably regarded as vieux jeu even then, and probably even more so now (2020). But it’s wonderfully readable - I loved it, and still have that same copy, now rather battered. 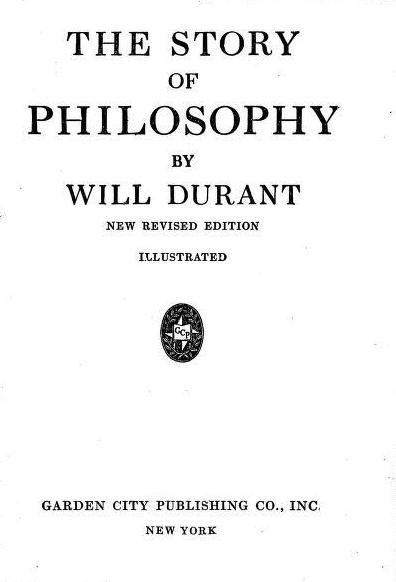 During that same stop-over, I also acquired, and read equally intently, a history of ancient Greek philosophy, in all its glorious diversity, and have been influenced by it ever since – perhaps a rare case of ‘Primum philosophari deinde vivere’. Stace really is the bee’s knees, and I still have that copy, just as battered and heavily annotated, to this very day. 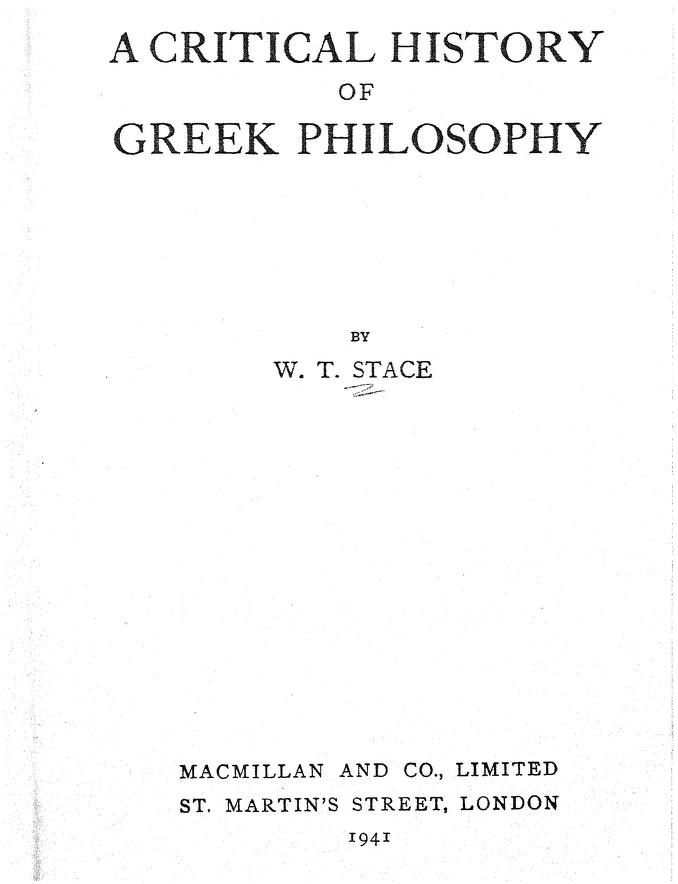 In view of the sweeping generalisations made in my opening paragraphs, do I regret spending so much time and focus in my teenage years on the writings of long-dead white European males, most of whom are now forgotten by a great majority of the general public, English-speaking or otherwise? More importantly, have I just wasted half an hour or so of your time in reading this tortuous essay? The answer to both questions is of course ‘No’.

In the brilliant pastiche 1066 and All That, the authors remark that

"Gladstone ... spent his declining years trying to guess the answer to the Irish Question; unfortunately, whenever he was getting warm, the Irish secretly changed the Question".

And Lord Palmerston, the Foreign Secretary in an earlier era, observed that

"The Schleswig-Holstein question is so complicated, only three men in Europe have ever understood it. One was Prince Albert, who is dead. The second was a German professor who became mad. I am the third and I have forgotten all about it."

My point being, that although the Big Questions about Life, the Universe, and Everything do indeed evolve from one generation to the next, it is immensely reassuring that philosophers of years past came up with answers appropriate to the perplexities of their time, and so it is our duty today (see our daughter Andrea’s contribution "The answer is Me!" in the magazine Philosophy Now, Nov/Dec 2008, p36 as to who was or is the best philosopher) to do likewise.

And this point is beautifully exemplified by the emergence and gradual development of ideas in Ancient Greece as to what the world (both terrestrial and astronomical) around us consists of. Isaac Asimov would be in his element here, but I will have to suffice.

There were numerous schools of thought, centred not only in Athens but based around the entire Hellenic (Greek-speaking) world of antiquity. 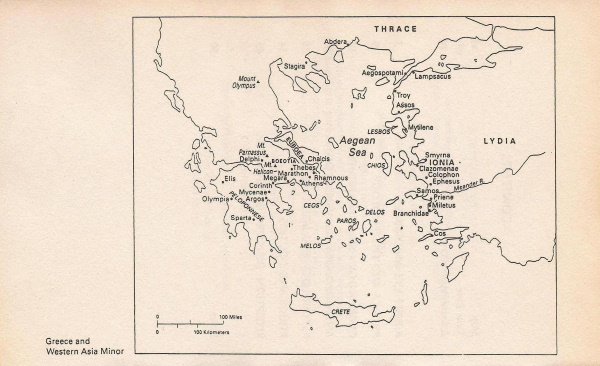 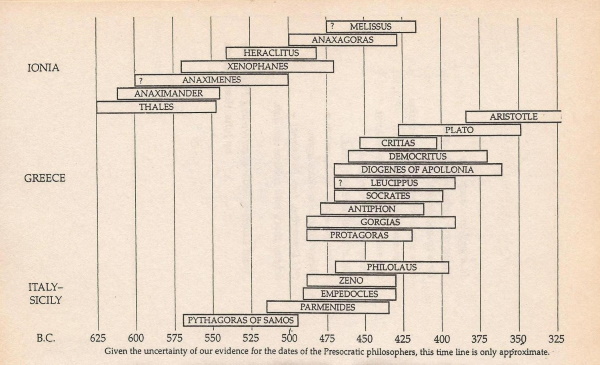 Long before Socrates and Plato were concerning themselves with ethics and politics (at a time when my own ancestors were daubing themselves in woad and sacrificing virgins at Druidic rituals in birch forests), the Ionic philosophers were deep in thought about the ultimate constituents of matter.

The following list attempts to summarise the concepts originated by the Ancient Greeks – very tentatively at first – that underpin the foundations of mathematics, physics and astronomy today. It goes slightly off the edge, so to speak, of the timelines above but that’s a small price to pay.

Seekers after truth in this respect eventually become known in the English-speaking world as ‘natural philosophers’, until in the nineteenth century, thanks to the polymathic William Whewell, they were relabelled as ‘scientists’.

The supercilious Wolfgang Pauli would have sneered at Thales’ belief that water was the unique element, as being ‘not even wrong’, but the most important thing is to conceive that a question needs to be asked in the first place; the right answer will then come along in due course.

In a span of 350 years, more was achieved by (say) a couple of dozen Greek philosophers than by all the Dip Tinkers put together during the next sesquimillennium of the entire western world. There’s no need to point fingers, as we all know what barbarian hordes and religious tyrannies were to blame.

But the general public today would recognise only one or two, possibly three, of the names listed above – Pythagoras, Archimedes, and maybe Aristotle. And I’d bet a bunch of tenners to a pile of potatoes that nobody could identify in any detail just what this trio would have had on their respective CV parchments.

Just one thing remains to be asked – why is Aristotle listed above? His physics and astronomy were absolutely dire, after all (though he got lots of other things right, notwithstanding). The answer is that, in absentia during the Middle Ages, he became the unlikely hired-gun of one of the religious tyrannies just alluded to. Step forward the Church of Rome. But why would a Christian church need the philosophical support of a pre-Christian philosopher – what could he bring to the party?

And quite honestly, I don’t know. Perhaps sophisticated Hellenic intellectuals had quietly abandoned belief in the picturesque panoply of the Homeric gods and goddesses, and moved on to monotheism. And who could blame them. So Aristotle’s ideas about Creator Mundi could well have been a boost to the Church’s own theology. There’s lots of stuff on the internet about all this and it gives me a headache – it’s just so presumptuous, and to quote from one of those fizzled philosophers implied earlier, "'Whereof we cannot speak, thereof we must remain silent".

But it wasn’t just Aristotle’s metaphysics that became statutory, it was also, in particular, his hopelessly faulty astronomy. And most of us already know what happened to Galileo, and worse still to Giordano Bruno, as a result.

The term "Universe", which we use daily as a synonym of "Cosmos", was in fact born out of a conceptual error. Originally from the Latin unus verterem, "that which rotates as one", today the word does not represent the movement that defines the Universe - because it definitely does not rotate as one. It was a clear allusion to the pre-Copernican [Aristotelian] conception in which the Earth was seen as a stationary star [body] in the center of the cosmos, with everything else turning in unison around it.