Born 26 Feb 1875 at Singapore, younger twin of William Campbell Little, to Mary Elizabeth, née Campbell, second wife of Dr Robert Little. During 1883 accompanied his brothers William Campbell Little and John Wishart Little to England where they were to commence their education in the care of Mrs Mackay in Edinburgh. Their mother wrote to them there from Singapore on 21 Jan 1884 for their birthday. Though she does not mention the fact, she was only just recovering from the birth of Louisa, 20 Dec 1883, her eighth and latest child. Her birthday letter to the twins seems to carry a premonitory injunction, for she died at Singapore 6 Apr 1884. Matthew carried the original of this letter throughout his career.

On their mother's death, their half-sister Jessie [abandoned her career in nursing and] went out to Singapore and took charge of their younger sisters. She brought them back to England with Doctor Robert, who was not in good health and already retired from his practice. They set up house at 48 St John's Park Road, Blackheath and in due course William, Matthew and John joined the household, where their education continued at Kidbrooke House, Blackheath.

Matthew went on to study mining engineering at Redruth, Cornwall and was articled to a mining organisation before going out to work in South Africa. During the Boer War he served in an ambulance corps. He later worked in Peru and Bolivia. In 1910 he married Florence Davidson and they were in northern Ontario when Margaret Elliot Little was born 7 Oct 1912.

The outbreak of the First World War found Florence in England, visiting her family with Margaret. Matthew closed the house and followed to England, hoping to join the Royal Engineers. Because of age and family commitments he was not accepted, but was drafted to a supervisory post in a munitions factory. A second daughter was born 4 May 1916 and christened Mollie Mary Campbell Little.A At the conclusion of the war Matthew undertook a temporary post in Nigeria in 1919 and in 1920 the family movedB to Victoria BC.

He was engaged with prospecting work in Porcupine and then mostly around Stewart BC. As a widower he lived on in retirement in Victoria and died in September 1967.

During his later years he was known to the compiler's younger sister Jane, who had settled in Victoria ca 1960. She was unaware of his existence until when driving our mother [Hannah Waddell] on a visit through the suburbs, there was an exclamation "Stop, stop, that's where Uncle Matt lives!". Thus the rewarding introduction was made.

A As "Mollie" is a diminutive of "Mary" it's possible that her name was actually Mary (Mollie) Campbell Little, and indeed that was the case (see below).

B They arrived by SS Scotia at Nova Scotia from Liverpool, on 1 May 1920, as per the passenger list: 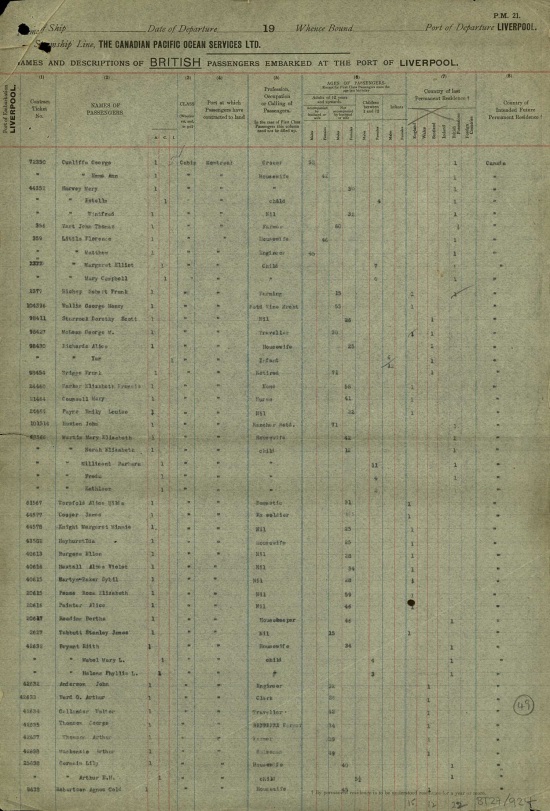