Married Anne Little 9 May 1842. She had gone to Singapore to keep house for her brother Dr Robert Little. There is evidence that McEwen and the doctor were already good friends.

He was a Partner of W R Paterson and Co, which was dissolved in 1851 and reformed as Robert McEwen and Co. The first Partners were William Morgan and Robert McEwen at Glasgow, Vernède and Richardson at Batavia, and Charles Bannantyne Findlay and John Harvey at Singapore. The Clerks were William Martin and Robert Harvey. In 1854 their interests in Sarawak had increased in importance and they reformed as the Borneo Co, with their agents in London to work those interests.

The Singapore office was established 31 July 1851 as the Borneo Co Ltd1  2, with John Hervey as Managing Director East. Ultimately there were branches established at Manchester, Calcutta, Batavia, Hong Kong, Shanghai, Bangkok and Sarawak, which administered amongst others the Agencies of HM Government of Labuan, Standard Life, North China and Norwich Union Assurance Companies.

Somewhere along the line Robert McEwen had bowed out, but the head of the rhinoceros, the subject of his adventure with Dr Robert Little, related in (?) Appendix A, was to be seen in the Singapore office.

What Sandy doesn't say, and probably didn't know, was that Robert McEwen had 'bowed out' in a rather emphatic way – he died in Mar 1854, aged just 37. I have seen somewhere that William Richard Paterson lived on until 1898, though had moved on from Singapore (although there is said to be a memorial plaque to him in the Cathedral there).

McEwen & Co was wound-up on 20 Apr 1857, having lasted scarcely five years. There are a lot of apparent inconsistencies in the stories of this whole nexus of companies – Paterson & Co, W R Paterson & Co, Paterson Simons & Co, Martin Dyce & Co, Borneo Co Ltd, and probably more, and it all just makes my head spin. The essentials of McEwen & Co are just as Sandy himself recounts.

The most succinct summary I've found was published shortly before the winding-up, by which time Robert McEwen had died and his son-in-law Oscar Vernède had left.

"The Singapore Almanac and Directory for the year 1856" (Singapore, Straits Times Press). Merchants and Agents - p 44.

McEwen and Co.
Established in the year 1842.

An Anecdotal History of Old Times in Singapore. From The Foundation of The Settlement Under The Honourable The East India Company on February 6th, 1819 To the Transfer To The Colonial Office As Part Of The Colonial Possessions Of The Crown On April 1st, 1867. By Charles Burton Buckley. (In Two Volumes), Fraser & Neave Limited Singapore 1902, Pp. xii, 790 19 illustrations and maps, Index. [Reprinted by the University of Malaya Press, Kuala Lumpur 1965. Price in Malaysia $25].

[William Richard Paterson had been among the first European names in the trading history of Singapore (a road is named after him in Singapore to this very day). He formed a company in 1842, then went into partnership with Robert McEwen which gave birth to the Borneo Company.]

The firm of W R Paterson & Co, which led on to McEwen & Co, and so to the Borneo Company, Limited, commenced in this year. In 1846 (the year when the first Directory of Singapore was published), the five partners were W R Paterson and William Morgan in Glasgow, Francis Richardson in Manila, Henry Vernede in Batavia, and Robert McEwen in Singapore. Mr John Harvey was then a clerk. In 1841, Mr Paterson left the firm; in 1850, John Black, William Martin, and V L Helms were among the clerks; and in 1852, John Martin and Robert Harvey. In 1852 the firm of McEwen & Co was established; the first partners were William Morgan and Robert McEwen at Glasgow, Vernède and Richardson at Batavia, and Charles Bannantyne Findlay and John Hervey at Singapore. The clerks were William Martin and Robert Harvey.

The 'adventure' of the rhinoceros is recounted in that same volume, and is reproduced below, but it's unedifying and distasteful to say the least, and I think rather the less of the protagonists as a result. 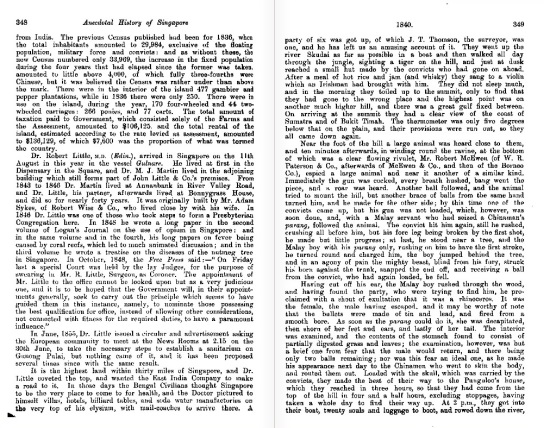 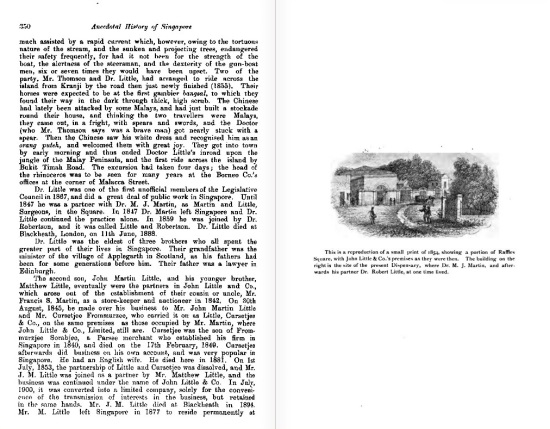 Watch the following clip, for example, to see how docile and harmless these mighty herbivores really are, unless seriously startled or provoked, of course: