Born 29 Mar 1854 in Singapore. Second child of Sarah Sophia Little née Whittle and Dr Robert Little. She was in England with her elder sister Sophie, being educated in the care of a Miss Eyre, when their mother wrote to her from Singapore 22 Apr 1842. They were about to move to a Mrs. Mack, This is confirmed by another letter from her mother 20 Aug 1862 in which she was to remind Mrs Mack that "postage is now 1/- from Southampton, as your letters are always insufficiently paid. It used to be 6d but was raised some time ago.

Her sister Sophie wrote to their sister Mary, still in Singapore, on 26 Jun 1863 from 19 Rutland Gardens where they were then in the care of a Mrs Meek and from her account it was a disciplined existence of which they had no complaints (the likeness of the names of their temporary guardians must be coincidence. Mrs Mack was probably in the Blackheath area whereas modern directories show Rutland Gardens to be off the present Knightsbridge.

Their mother died in Singapore sometime around 1868-9, as did Jessie's younger sister Mary Little 31 Jul 1869 to be buried in Blackheath. Dr Robert Little made a round-the-world trip in 1870 as (?) he met and married Mary Elizabeth Campbell on 5 Jan 1871. The girls were already acquainted with her.

On 8 Feb 1871 Sophie was outward bound to Singapore with her father and his second bride and replied to a last letter from Jessie, from Tanjore off Cape St Vincent, reproving her "but my dear before going on, let we make one observation which is that I never flirt and don't like you telling me that I sh'a'nt be able to do so under Papa's eyes, which is ...... a mistake. Let me remark en passant, for if I choose to flirt with every man on board Papa would not be the wiser."

Jessie was due to follow out to Singapore shortly afterwards. Her elder sister wrote in Jul 1871 as an 'experienced' traveller giving advice on the wardrobe she should choose and offering general hints and tips on travel aboard ship. She stressed the inadvisability of spending all her father's allowance in England but to keep some for trimmings to be purchased from Chinese pedlars, and other items which could be bought from "Uncle Matt's" (a reference to John Little and Co).

There she must have stayed until late 1873, evidenced by a letter dated 6 Feb 1874 from Mary Elizabeth Little acknowledging receipt of Jessie's last letter by French mail. It was full of intimate local news and indicates that she must have formed a bond with her infant half-sister Mary, born 10 Apr 1872, who, according to another letter from Mary Elizabeth Little dated 6 Feb 1874, continued to ask for her.

Back in England she must have commenced her training as a nurse.

On the death of her stepmother 6 Apr 1884, she gave up her nursing career and went out to Singapore to take charge of the five girls of the second family, Mary (12:00), Maud (5:08), Harriet (2:11), Alexa (1:09) and Louisa (0:05). She assisted her father wind up his affairs and then all returned to England where they set up home at 48 St John's Park, Blackheath. No 48 stands as the left hand half of a tall, gaunt, semi detached house, built only the previous year. They named it 'Bonnygrass'.

A failure of two Banks had seriously affected her father's investments and the more affluent way of life would no longer be possible. Siglap plantation had been sold below its true value and generous entertainment, with a household staff of servants comprising cook, syce, garden boys, ayahs and houseboys, would be a matter of the past. Perhaps now there were a cook and two maids.

The three boys of the family, the twins William Campbell and Matthew (9:01) and John Wishart (7:01) were already in Edinburgh in the care of Mrs Mackay. In due course they too came to live at No 48, where they finished their schooling at Kidbrooke House, Blackheath. It was at No 48 that their father, Dr Robert Little died 11 Jun 1888, aged 69. Jessie was thus left as proxy mother to the 8 children.

Her financial resources were straitened – with five girls and only three hats, simultaneous Church attendance was a problem! Under her care, the boys were launched on their careers. William Campbell, via Sandhurst, to the Indian Army, where he rose to command as Colonel of 6th Gurkha Regt.; Matthew, who had a great regard for his step sister, as a mining engineer and geological prospector, and John Wishart as a doctor, in the Indian Medical Service.

As the family dependency decreased, Jessie moved from No 48, between 1900 and 1903, to No 57 which stands on the opposite side of the road. Thither she had transferred the house name 'Bonnygrass', and was last recorded as the occupant in 1905.

With the exception of Maud, the girls married in turn: Alexa in 1911 to Alexander Craufurd, Louisa in 1917 to Piers Sumner, and Harriet in 1918 to Eustace Gunter.

Jessie was later cared for by and lived with Louisa and Piers Sumner. She died in 1936 after a life unstintingly devoted to others and fully exemplified in the portrait of her as a young girl in her nursing uniform. 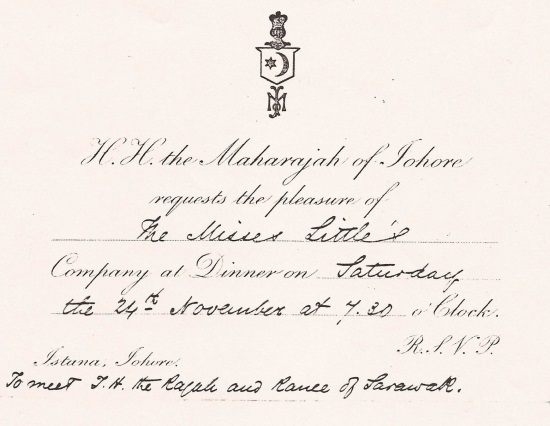 This invitation must have been for the 24th November 1871 and addressed to the Misses Sophie and Jessie Little. Both had returned to Singapore on completion of their schooling in England, and Sophie was to marry James Brennand before the year was out.

The card was kindly presented to the compiler by Miss Alexa (Lexie) Sumner.

The state of Johore occupied the southern portion of the Malayan peninsula, separated from the island of Singapore by the Straits of Johore. The state of Sarawak was (and is) situated on the northwest of the nearby, but much larger, island of Borneo. Both are nowadays part of Malaysia. 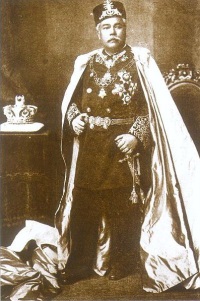 His (first) wife, though not mentioned on the invitation, was Wan Chik bt Muhammad Tahir Zubaidah bt Abdullah Fatimah bt Abdullah Khadija Khanum. By this time he had married a second wife, not mentioned either of course, Cecilia Catherina Lange, the daughter of a Danish trader, and was later to take two further wives.

It might therefore strike us as odd that their Highnesses the Rajah and Ranee of Sarawak received double billing on the invitation. In fact the Rajah (Charles Anthony Johnson Brooke (3 Jun 1829 – 17 May 1917)), and Ranee (Margaret Alice Lili Brooke née de Windt (1849-1936)), were both born and educated in England. They were part of an extraordinary dynasty of benevolent autocrats, known as the White Rajahs, who ruled Sarawak from 1941 until 1946. 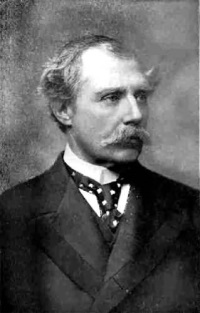 The White Rajahs were a dynastic monarchy of the English Brooke family, who founded and ruled the Kingdom of Sarawak, located on the island of Borneo, from 1841 to 1946. The first ruler was Englishman James Brooke. As a reward for helping the Sultanate of Brunei fight piracy and insurgency among the indigenous peoples, he was granted the province of Sarawak in 1841 and received independent kingdom status.

Charles Brooke succeeded to the monarchy on 11 Jun 1868 and ruled until his death in 1917. Sophie and Jessie, having been educated in England for some years, would have had little or no previous opportunity to be introduced to him and his wife, to whom he was totally devoted.