Born 26 Apr 1875 in Singapore. Second child and elder twin of Matthew, to Mary Elizabeth (née Campbell) and Dr Robert Little. His formal education commenced in Edinburgh, where with his twin Matthew Little and younger brother John Wishart Little they were in the care of a Mrs Mackay in the autumn of 1883. On the death of his mother in Singapore on 6 Apr 1884, Dr Robert Little (known to the boys as the 'ruling elder') retired to Blackheath. There, with the help of his daughter Jessie Little, the whole family was gathered.

William Little continued his education at Kidbrooke House, Blackheath. He gained entry to Sandhurst and was commissioned into the Marines, transferring to 3rd Gurkha Rifles, and eventually served with 6th Gurkha Rifles between 31 Jan 1907 and 1 Jan 1922, holding command as Colonel1 from 17 Mar 1918 till retirement 1 Sep 1922. He survived the landing at Gurkha Bluff2 in the Gallipoli campaign but was severely wounded in action against the Turks in the Suez Canal zone 12 May 1915.

He married Marjorie Birkett and latterly lived in Charmouth.

Col Little was undoubtedly a distinguished and highly-decorated officer, but one can be equally sure that this particular award gave him especial cause for pride:

Decorations conferred by
HIS MAJESTY THE SHAH OF PERSIA.
Order of the Lion and Sun. 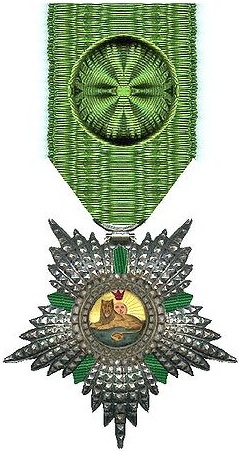 Order of the Lion and Sun