Born 16 0ct 1850 in Singapore. Youngest child of Sarah Sophia (née Whittle) and Dr Robert Little. Almost certainly in the service of Raja James Brooke of Sarawak with whom his father was acquainted, but documented proof is still required. As an administrative officer, having sentenced a head-hunter to a long term of imprisonment as a deterrent to the practice, the miscreant swore revenge when led from the court. In the amnesty granted by Raja Brooke to mark the occasion of Queen Victoria's Diamond Jubilee 1897 the prisoner was inadvertently released and making his way to the parade ground, he attacked Robin as he sat mounted in full ceremonial uniform, inflicting a deep cut which scarred his face for life, before being overpowered. He married Ruby Campbell, the younger sister of Mary Elizabeth Campbell (second wife of his father Dr Robert Little!).

As we see from the boxed text below, Robert (aka Robin) McEwen Little was clearly recognised as an outstandingly capable colonial administrator, and a tough and seasoned expeditionary campaigner. The attack on him at the Durbar on 28 May 1889, described below, was in fact an act of premeditated revenge, as outlined in Sandy's summary above.

I was absolutely delighted to discover both these accounts, as they explain a longstanding confusion. My father would often allude to a mysterious episode involving "Uncle Robin and the head-hunters", but owing to his habitual digressiveness never got to the point of the story. Furthermore, "Uncle Robin" to me meant my father's younger brother who had died of polio at the age of 21, so I was completely baffled. To my father, Little was in fact a great-uncle, but the degree of avuncularity had been elided, as they say in Barnsley, and the whole thing has puzzled me for 60 years. At last, I have closure!

During the long period of nearly twenty-three years in the service of the Chartered Company, Mr Little had the most varied and interesting experiences. He accompanied the first expedition to the Interior against Puroh and Gana in October 1883, in company with Chief Inspector de Fontaine. He also took part in the Kawang expedition in May 1885, on which occasion he was wounded by a spear in the arm when several Bajaus 'ran amok'. Despite his wound, Little 'disposed of his opponent with his revolver'. In addition, Dr Manson Fraser was shot at point blank range, the Sikh Jemadar killed and eight other police were wounded. Chief Inspector de Fontaine pluckily pursued several of the attackers but tripped and fell just at their heels. He was speared nine times and dropped three men with his revolver but died of his wounds a week later.

Little participated in two further expeditions, firstly to the Marudu Hills in June 1894, narrowly escaping with his life when the Police post was attacked, and in the expedition up the Labuk and Sugut Rivers in September 1896. At the Durbar held at Sandakan on 28 May 1889, in celebration of Her Majesty's birthday, Little had another very narrow escape with his life. Whilst superintending the tug of war near the conclusion of the athletic sports, a Bajow named Drah suddenly 'amoked', having procured a Dyak Parang, rushed upon Little who was badly cut about the head and cheek. He also succeeded in wounding two police constables before being knocked down by the Battery Sergeant-Major and secured and ironed. The prisoner was tried and sentenced to 28 years imprisonment and died in Sandakan Gaol in November 1899.

In addition to his other duties, Little served many years as a Magistrate and was appointed a Judge of the High Court in August 1904. In March 1905 he was permitted extended leave to the U.K. to attend to urgent private affairs but fell ill and died in Edinburgh on 17 December 1905, from pneumonia and pleurisy. "The Service," it was reported, "has lost a zealous and loyal Official, and there is no doubt that his death will be mourned throughout North Borneo by Europeans and natives alike. He had served the Company faithfully and well for over twenty-two years, during which time he was more than once placed in a position of imminent danger." 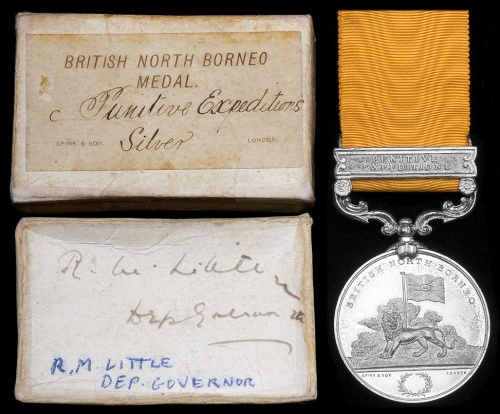