As per the genealogical tree depicted on pp 68-69 of

with appropriate amendments and extensions as supplied by my wife Sonia. Please note that familiar names are used rather than given names, where appropriate – but in some cases it isn't clear whether a name is given or familiar anyway!

I have also made extensive use of the Townend family history compiled by Sir Harry Townend in 1961, and the accompanying family tree which was evidently extended to the mid-1990's by other members of the family following his death in 1976.

Please note also that I've (temporarily at least) included dates of birth and death, where available from Sir Harry's history and/or tree, and that I've only included the bare minimum of Kaulback information, which is compiled exhaustively in the Kaulback Connection.

I'd also like to acknowledge Helen Thornton's deeply impressive ongoing archive of Townend family correspondence, from which I've corrected a number of embarrassing mistakes on my part in the table below, and continue to enjoy such a fascinating insight into family life during the pre-war colonial era in India.

For biographical profiles of the Rev Alfred Townend and his seven sons, taken from The Kaulbacks please click pp 70-71 and 72-73.

Of greatest immediate interest amongst these distinguished offspring were

Sons receive a much greater degree of attention throughout The Kaulbacks than do daughters or indeed wives or sisters, and of course this can be understood in terms of the genealogical process itself and indeed the whole tenor of pre-feminist thinking. This is no reflection on Bill Kaulback himself, as we are all imbued with the zeitgeist into which we are born.

This excerpt is taken from the first chapter of
By Request of Uvani, A M Kaulback, privately published, 1965 or later

Early in the First World War I received a telegram

A few days later, I gazed, horror stricken, at a long paragraph in the Morning Post. It was headed "An Officer's Heroism", and read as follows

"A motor-ambulance driver, at the front, sends his mother a thrilling account of the fortitude and cheerfulness of an officer under the most distressing conditions. The driver says 'After dinner I commenced a letter, but was interrupted by a shell bursting in the vicinity and a man yelling for bandages. Of course I rushed to see if I could be of any use, and found that the shell had burst at the side of the road about forty yards away, right in the midst of a party of Indian engineers who were inspecting the telegraph wires. T and I grabbed stretchers from our car and, with some others, rushed for the Indians. I was late in starting and all the Indians were being attended to when I arrived on the scene. However I saw someone in the shell-hole where the men had been hit, and so had escaped notice. It was a man, the white officer of the Indians, who appeared to have his legs half buried in the debris of the hole. He told us to attend to the others first; he was all right. And then, as we moved him, we saw that he was standing on the stumps of his legs. Both had been shot off at the knees. (I'm telling you this story because of the extraordinary courage the man showed – such courage as I've never seen before and hardly imagined. It's worthwhile hearing the horror of it to realise that we are officered by such men.)

'He was perfectly conscious and calm, and spoke as though he were a medical officer and someone else the victim. He looked at his legs as we moved him on to the stretcher and asked me quietly (he was not in the least excited, and his handsome face showed no pain), to tie something tight round his legs to stop the bleeding. I did what I could with my handkerchief and another I requisitioned, and we took him to our billet. We had to move hurriedly, of course, as a second shell followed, and we wanted cover in case any more arrived. 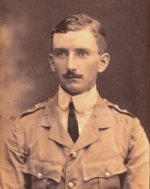 'There were two R.A.M.C. men with us, and they attended to the subsequent first-aid. They discovered another horrible wound in his arm, and while they were dressing it he told them he thought he would give up football next year. We then took him to the nearest hospital. He was still conscious and perfectly collected, and laughed quietly and talked, apologising for the trouble he was causing, while on the way to hospital. And I came back thinking of that tag in some book or other, I have seen a man. The poor fellow died in hospital'"

The following day the Morning Post said they had learnt that this officer was Captain Francis Whitchurch Townend, Royal Engineers, one of my brothers.