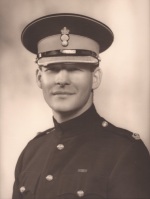 Click here for his obituary on the website of The Queen's Royal Surrey Regiment or here for a local copy.

Click the titles for his very detailed obituaries in The Times, the Daily Telegraph, the Rutland & Stamford Mercury and the Old Rugbeian Society Bulletin.

Click here for his entry in the Rugby School Who's Who edition of 1989.

Click here for the elegaic valediction spoken at his funeral service by his youngest son Roy.

Click here for his biographical details as summarised from his family history The Kaulbacks.

For an account of his active service 1942-1945, compiled from his diaries by his mother Alice Kaulback and reproduced from The Kaulbacks, click the following pages.

(Further to the account on p35 of Bill's decoration with the DSO for his gallantry and leadership at the Battle of Müssendorf, click here for the field dispatch commending his actions that day, signed by Field Marshall Montgomery himself.)

And for a fascinating retrospective dialogue between Bill and his brother Ron also reproduced from The Kaulbacks, click here.

Tempora mutantur et nos illis, as I recall with customary inexactitude – the aphorism comes in various different forms anyway, and its basic tenor is that times change and us with them. Ron was relaxed about this and once the Second War was over he moved to South West Ireland with his family and 'went native' in that he embraced the people, the culture and the way of life. (He also took Irish nationality1.) I don't blame him – were I not dependent on the UK NHS for very expensive medication that keeps me alive and kicking I would love to live over there too, amidst beautiful scenery, lovely people, and an unhurried pace of life.

Bill was quite different. He remained very active in the high-powered neo-imperial Middle Eastern petroleum milieu2 for a good few years after the war before semi-retiring to the ultra-smart Sloane Square district of London, and then finally moving to a quiet corner of Stamford in Lincolnshire. He completed The Kaulbacks in mid 1976, though our autographed copy is dated early 1979. One of these days I'd like to make the entire book accessible via this website, as it is a distillation of his very considerable intellect, coupled with (as I remarked earlier) a justifiable pride of ancestry.

A reflection of this was the (von) Kaulbach coat of arms that was displayed in his London townhouse3 and later on in the main hall of his Stamford mansion. 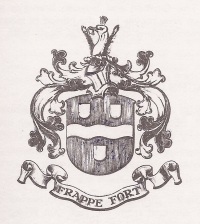 It also adorned, in embossed form, the front cover of The Kaulbacks and, in more detail, was printed on p 3 of the text within, where he remarks

"That the family was ennobled early may be deduced from our chivalry: 'Gules a Fesse wavy between three Escutcheons argent', the simplicity of which indicates that it was probably granted us sometime in the 12th or 13th centuries, though not surprisingly, in view of the recurrent wars and burnings, no written record of this has so far come to light.

The lack of quarterings also shows that the von Kaulbachs did not intermarry with great houses and we can deduce from this that they resisted the temptation to be drawn into the mediaeval Power Game which caused the ruin and eclipse of so many families."

For those such as myself to whom heraldry is a magnum mysterium (well, I may be just a page or two ahead in the textbook), the heraldic image as a whole is most properly called an achievement or a blazon, and in this particular case, which actually quite generic, it comprises the following elements:

(For further discussion of heraldic basics, please see the Heraldic Footprint section, in which the Waddell arms are semiotically deconstructed in an attempt to clarify the early back-history of the family.)

Bill had evidently commissioned this oil painting of the Kaulbach arms a good many years ago and by now it is much darkened by age and exposure, quite unsuitable for a decent photographic reproduction, and so I'm currently trying to obtain a fresh copy from a German website. The whole procedure is like trying to steal a secret blueprint of the latest vergeltungswaffe, but I live in hope.

Alternatively, one can commission a fresh representation4, in digital format, from a website such as www.fleurdelis.com/coatofarms.htm which also provides an excellent alphabetic compendium of heraldic features such as peacocks and horseshoes for example!

Either way, I look forward to displaying a bright new copy for Kaulbacks everywhere to admire and make use of.

For a good number of years, on our visits to her Uncle Bill and Aunt Fenja at 82 Tinwell Road in Stamford, my wife Sonia and I, plus our faithful Sally, of the Parson Russell variety, would step or trot, wearily through their slightly unprepossessing porch into the hall, passing as we did so a rather nondescript oil painting hanging on the right-hand wall.

After their deaths, and their younger son's death, we volunteered to help their elder son to sort through the mountain of family possessions and guide them, if necessary, to appropriate recipients. Along with other more identifiable family portraits from bygone centuries, the painting in the porch had to find a new home. 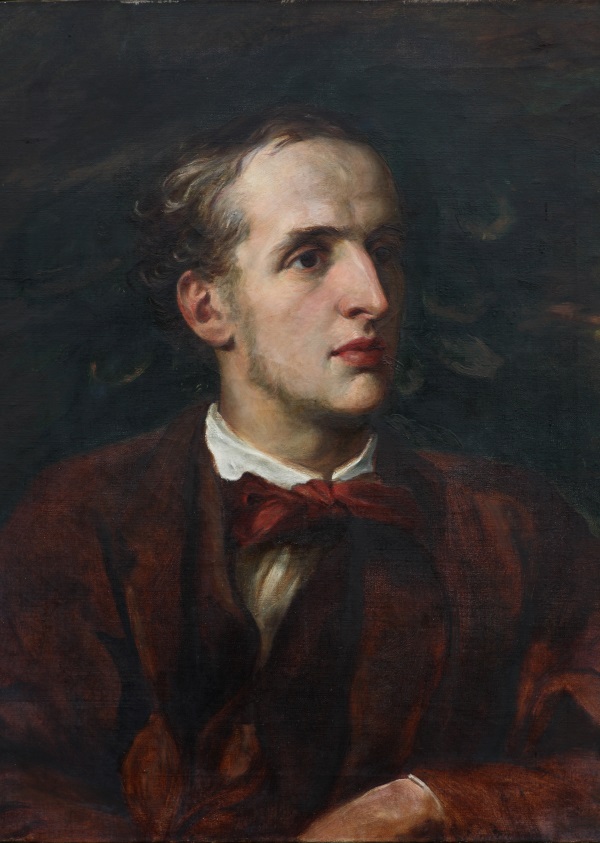 The inscription on the frame simply said George Howard, and a faded label on the back said Alice Lowther. This was a challenge! Who were they? Would we require the services of the Baker Street Irregulars, or even the world-weary Holmes himself, with his immense compilations of Society, Demi-Monde and Underworld newspaper cuttings, to tickle things along?

Getting home, I discovered that the modern equivalent of such sources, the internet, was more than equal to the task. The remarkable website www.thepeerage.com had all the answers, although of course one had to gradually cross-check and zero in on them, hacking through the dense undergrowth of late Victorian minor ennoblements.

Cutting straight to the chase, please note in turn George's aunt, his mother and himself as per that website.

George James Howard,1,  2 9th Earl of Carlisle was born on 12 August 1843 at Park Street, Grosvenor Square, London, England. He was the son of Hon. Charles Wentworth George Howard and Mary Priscilla Harriet Parke. He married Hon. Rosalind Frances Stanley, daughter of Edward John Stanley, 2nd Baron Stanley of Alderley and Hon. Henrietta Maria Dillon-Lee, on 4 October 1864 at Alderley, Cheshire, England. He died on 16 April 1911 at age 67 at Brackland, Hindhead, Surrey, England, from heart failure. He was buried on 20 April 1911 at Lanercost Abbey, England. His will was probated on 15 June 1911, at £43,970.

This was indeed our man, a painter himself, in the pre-Raphaelite style, and a friend of Edmund Burne-Jones. Not to mention himself the heir to the stupendous Castle Howard in Yorkshire. 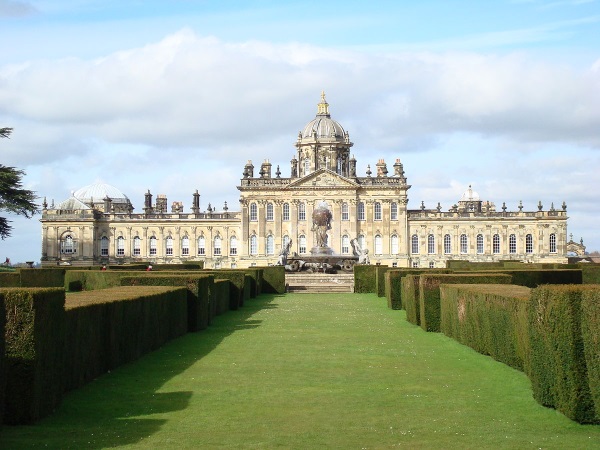 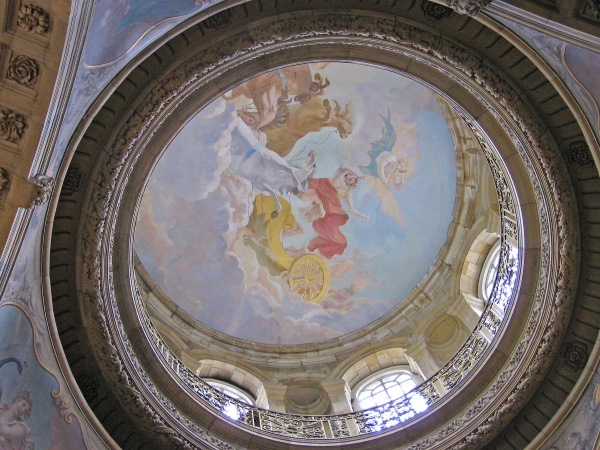 But who had painted the painter himself? There was not far to look. Cherchez la tante.

The following photographs originate from a historical snapshot of Ampthill Park House, family seat of the Lowther family in Bedfordshire, compiled by the Ampthill & District Archaeological & Local History Society, may their shadow never decrease. Please click the images to enlarge them (if feasible).

My purpose is to reveal photographs of Alice Lowther and her nephew George in family contexts. Photographs from the Victorian and Edwardian eras invariably look extraordinarily stilted and never suggest that anybody is having much fun – their intention was primarily to convey how upper-middle-class, indeed aristocratic, everybody is. These are no exception!

As we shall see, the Lowther's townhouse in Holland Park was where Alice pursued her more satisfying artistic inclinations. 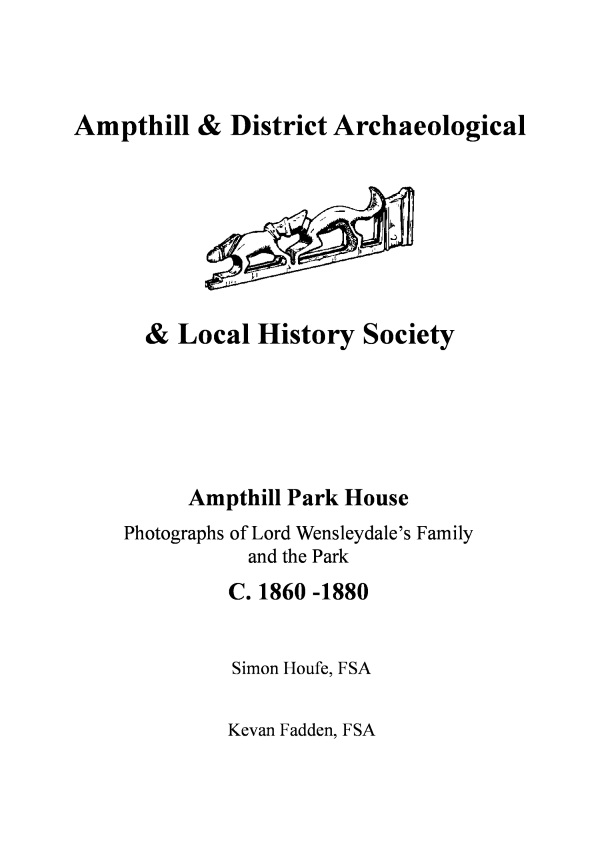 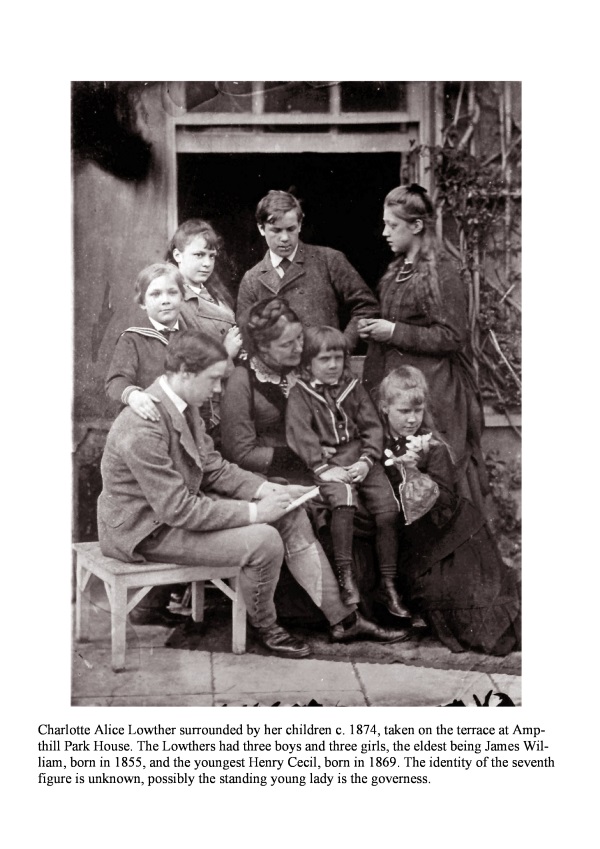 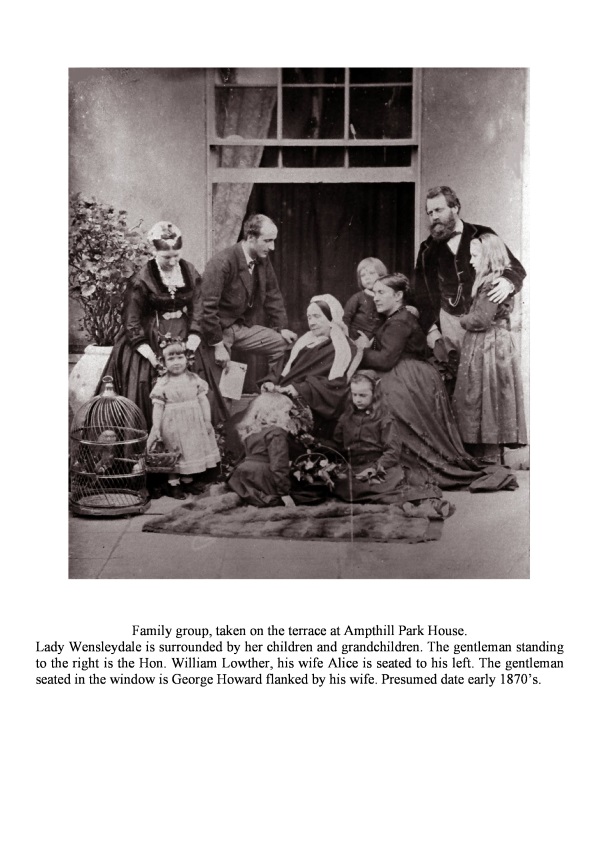 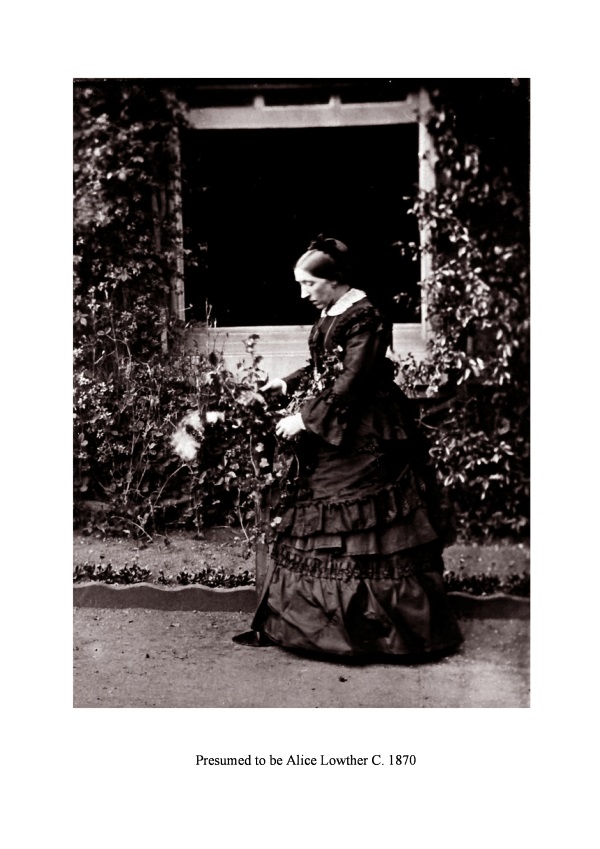 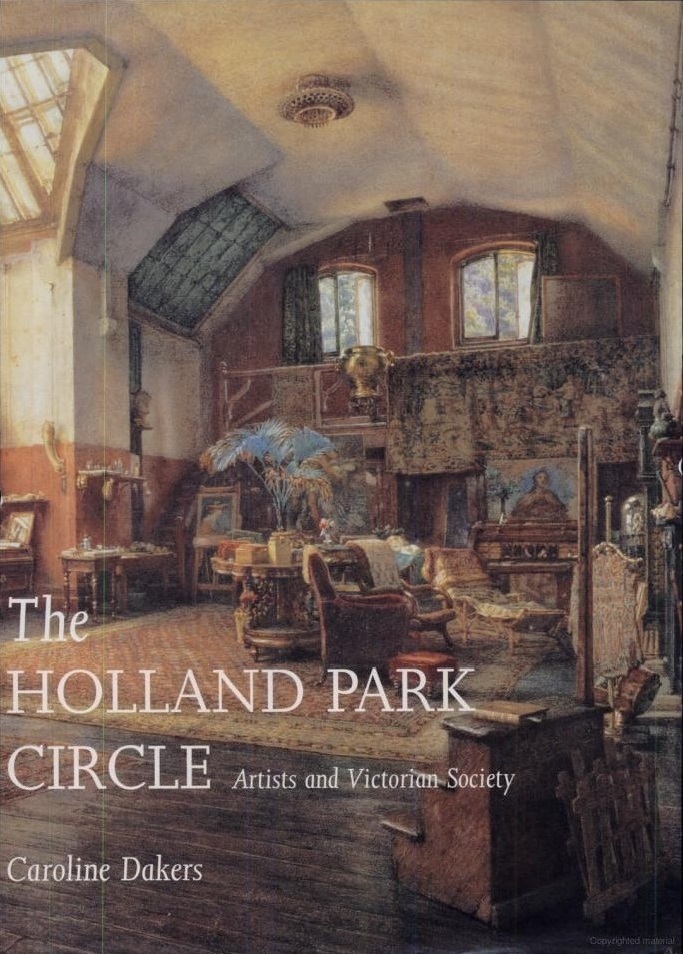 As per p158 of Caroline Dakers' book The Holland Park Circle, the dust-jacket of which is reproduced above, [18 Hyde Park Gate] was the first house that the architect Richard Norman Shaw had designed in London and marked a new direction in his career – his development of the Queen Anne style. It also brought him different clients, including the Honourable William Lowther MP, and the stockbroker and amateur artist John Postle Heseltine, who commissioned houses between 1871 and 1874, to be built close by: Lowther Lodge (now the Royal Geographical Society) on Kensington Gore and Heseltine's house, 196 Queen's Gate.

Both Lowther and Heseltine were discerning and wealthy men who entertained the artists whose works hung upon their walls. Lowther was married to Charlotte Alice Parke, aunt of George Howard and a talented amateur artist with a reputation for high-mindedness; [it was said that] at some of her entertainments it was not easy to tell where society ended and high thinking began.

The Lowthers purchased the Auckland estate on Kensington Gore, two acres of gardens and Eden Lodge, for £36,000. In their new red-brick house, Shaw provided them with a large central hall which was used as a ball-room and an exhibition space for the Royal Amateur Art Association which Parke founded, [described as] a dignified and artistic setting in which to entertain their elegant friends from the worlds of politics and society. 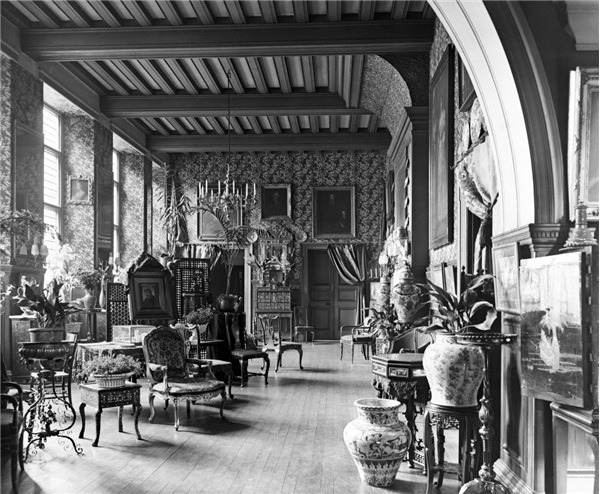 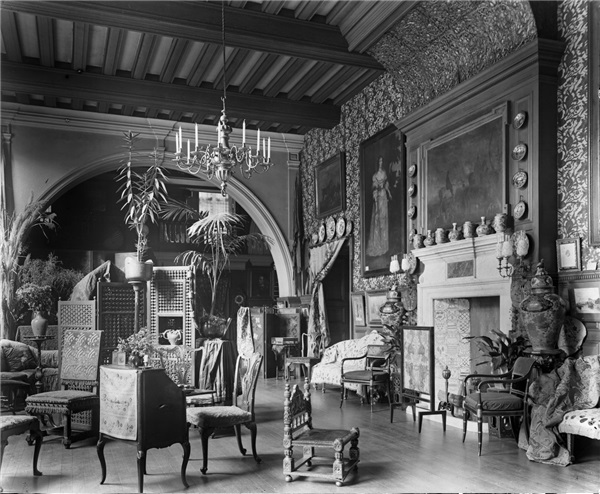 About a decade later, the Lowthers also acquire Ash High House as a country residence in the village of Campsea Ashe, 6 miles south west of Saxmundham.

Ash High House was the home from 1652 to 1882 of the Sheppard family, part of the house damaged by fire in 1865 being rebuilt in congruent style by the architect Anthony Salvin. In 1882 house and estate were sold to William Lowther, for a time MP for Westmorland. At its next sale, in 1949, Ashe High House was described as having 31 bedrooms and dressing rooms, 6 bathrooms, 6 reception rooms and a library. The estate in 1882 amounted to 4,100 acres, 144 acres of deer and home parks, and 240 acres of woods and plantations, with 13 farms. The new owners were residents of Campsea Ashe for the next 66 years. The property passed in 1912 to Lowther's son, James, Speaker of the House of Commons from 1905 until 1921, created subsequently Viscount Ullswater of Campsea Ashe. In died at the High House in March 1949, aged 94 years.

After repeated sales following the Second World War, Ashe High House fell into ruin and only the foundations now survive.

Fortunately, however, the parish church and churchyard between them contain a great many Lowther family memorials and gravestones, all in excellent condition. 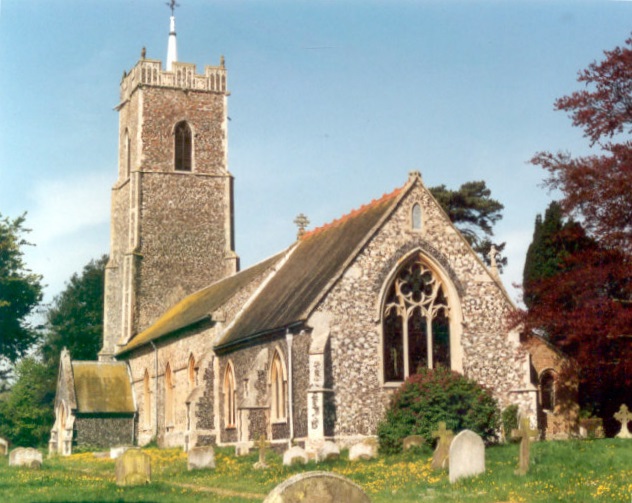 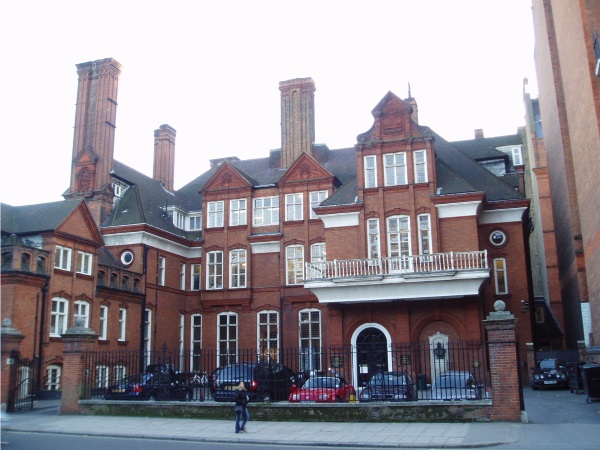 After Lowther died in 1912 his son sold the house to the Royal Geographical Society, which converted it into its headquarters, commissioning extensions from G. L. Kennedy and F. B. Nightingale in 1928 to 1930, which included the Society's lecture theatre. A further extension, including a new exhibition space, reading room and storage area for the Society's collections, was completed in 2004.

[This is indeed a peculiarly appropriate new purpose for the building, as both Bill Kaulback himself and his brother Ron were for many years prominent Fellows of the RGS]

Apart from a couple of small water-colours of rural scenes, spotted in an obscure auctioneer's on-line catalogue a few years ago, nothing of Aunt Alice's artistic output seems to have survived, other than her portrait of the young George Howard.

But where on earth had Bill found it? And had he recognised its familial significance – as he ought, of course, as his sister-in-law Audrey was a Glossop Howard, so to speak. And ought he have presented it to her? As a visitor to the house, she herself had passed it in the porch innumerable times, but if she did notice it, clearly never coveted it.

My own theory is that he had come across it, stacked with other forgotten old family portraits in a basement of 1, Kensington Gore (as Lowther Lodge was prosaically renamed by then), at a time when he lived not far away at 69 Cadogan Gardens, and thought to himself that it needed a good home (after due negotiation with the RGS of course) ... after that, who knows whether he even gave it a second thought.

And, finally, yes it did find an appropriate and appreciative recipient, Bill's niece Susie.

For another instance of Bill as snapper-up of unconsidered trifles, please see the Battle of Atbara et seq.