In 1875 the Reverend Alfred John Townend, B.A. Cantab., Chaplain to the Forces, was posted to Halifax, Nova Scotia, Canada, which was then a British naval and military station, and on 16th June 1880, at the age of 41, he married Margaret Wiseman Stairs, aged 27, daughter of the Hon. William James Stairs.

They lived at 16 Kent Street, where their four eldest children were born, William, Bernard, Alice and Frank.

In 1886 their father was transferred to Dublin, where the family lived at No. 2 Abercorn Terrace, North Circular Road. Here the next two sons were born, Herbert and Roy.

From Dublin he was transferred in 1890 to Gibraltar, where the family lived successively at Windmill Hill, where Susie was born, and Beaulieu, where Harry was born.

Leaving Mr. Townend in Gib, the family came Home for a three months holiday at Plymouth, and there Mrs. Townend received a telegram from her husband asking her to telegraph him whether he should accept a posting as Chaplain to the Royal Horse Guards, London, which had been offered to him. Her historic reply was "All I can say is I cannot decide"!

At any rate the appointment was accepted, and for the next two years, until 13th June 1894, the family lived at 8 Creffield Road, Ealing, then in open country, with fields outside the house "deep in hay" in the Summer, and with a railway line close enough for the children to wave to the guards of the trains as they passed by.

Gerald, the last of the family, was born at Ealing.

From there their father was posted to Sandhurst as Chaplain to the Royal Military College (now Academy, since Woolwich closed) and at the end of July 1894 moved into the Chaplain's quarters at 5 The Square, opposite the College chapel, where there is a memorial tablet to him on one of the pillars in the old part of the chapel.

No. 5, like all the other officers quarters in The Square, was a two-storey block of grey plaster, uncompromising but not unattractive, with a deep 'area' (a 'sunk court in front of basement of a house' – O.E.D.) which gave light to a basement containing two huge kitchens and the bedrooms of the domestic servants. A later generation was to abandon the downstairs kitchens and the damp bedrooms and to replace them with no servants and a small modern kitchen on the ground floor.

The garden seemed large, with a lawn on two levels, the upper one having a silver birch tree on the left and on the right a chestnut tree under which one winter the father of the Townends strewed large (bought) chestnuts amongst the fallen leaves, which deceived the children into thinking that the chestnuts were indeed the fruit of their own tree.

Beyond the lawn stretched the vegetable garden, up to the high wooden fence which screened it from the stables beyond, where the horse was kept and the wagonette that carried the family as far afield as the seven miles to Aldershot to see Queen Victoria reviewing her troops.

Mr. Townend was seven years at Sandhurst, until 25th September 1901, when he was placed on the retired list and went to live at Southsea, but still served as Chaplain, first to a Field Artillery unit at Hilsea, and then to the King's Royal Rifles at Gosport, both near Portsmouth, until he died in harness on the 3rd of May 1911 at the age of 72.

During the ten years at Southsea the family's first house was "Marcia", in Woodpath, off Elm Grove, which in recent years has been some sort of Academy. The house is very much as it was, except for a door having been very sensibly opened up between the kitchen and the dining-room next to it. And the garden, where the boys played football handicapped by a row of fruit trees running through the middle, has been enlarged by the addition to it of the strip of garden which used to belong to next door.

The second Southsea house was the four-storeyed No. 34 South Parade, within sight (and sound!) of the South Parade Pier. It had no garden, and is now a boarding-house, like most if not all of the houses in the neighbourhood.

On her husband's death, Mrs. Townend moved to Camberley, to a house called "Sunnyside" in Upper Gordon Road, where she lived until her death on 23rd September 1914 at the age of 61. Sunnyside is now divided into two flats under new names.

This narrative is transcribed from a photocopy recently (Dec 2016) discovered when unpacking a box of documents from the house-removal in early 2015, though I couldn't remember ever having seen it before.

There were also some photocopies of late Victorian-era family photographs of his maternal grandparents, which likewise came as a complete surprise, and images of which are shown below.

The oddest feature of these (re)discoveries is that they had been printed out on pre-used A4 sheets which clearly (from their content) dated from around 2000. At that time I didn't have a PC, though my wife Sonia did, and her characteristic frugality in never using brand new printer paper, indicated that she'd produced those printouts. They must have been attachments emailed to her, printed out but not saved (a reflection of her constant concern that saving things was likely to overload her C:drive) as there's no sign of the legacy downloads on her current PC.

It's nice to untangle these little mysteries. 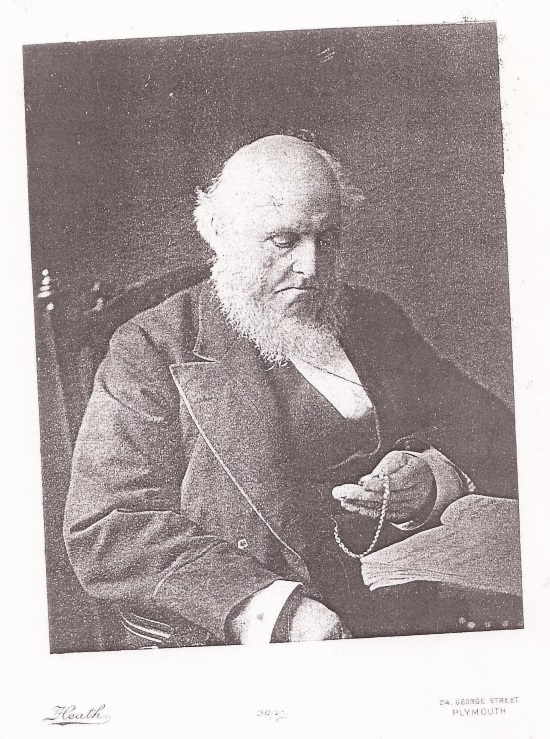 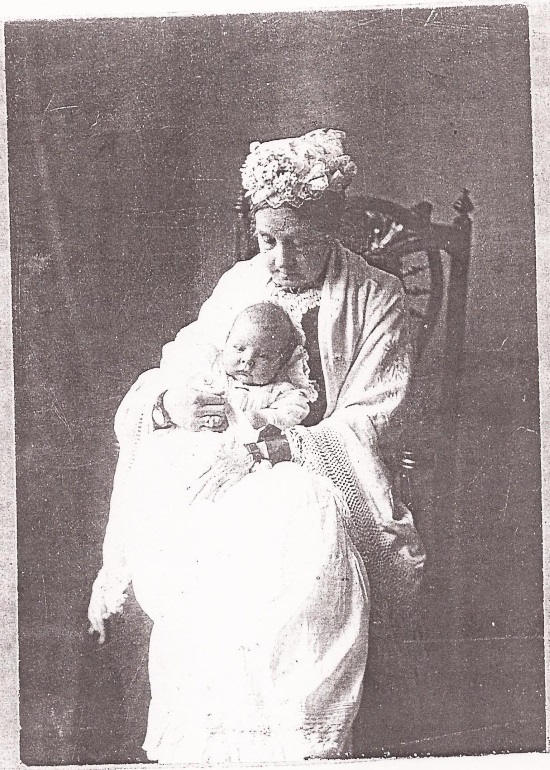 said to be holding "her great-great-grandson (b 9 Sep 1902)",
but with 13 children of her own, plus grandchildren etc etc
it's well nigh impossible to identify him. 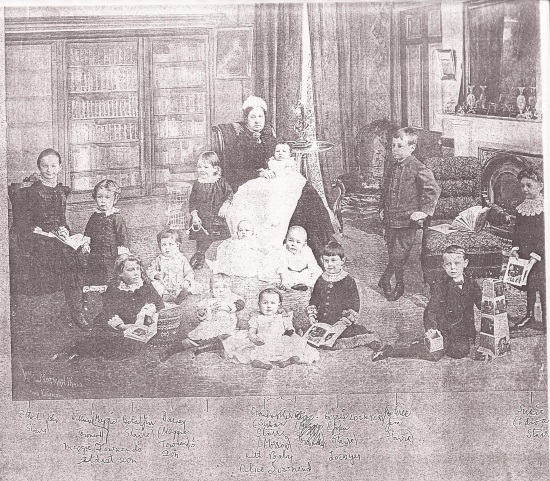 In this picture, great-great-grandmother Stairs is said to be holding young Alice Townend (b Dec 1883) on her lap, which puts the date at early/mid 1884.

The other Stairs identifications are probably not really of such immediate relevance to the Townend story.

But even so, I have just come across a deeply interesting Stairs family compendium, centred around William James Stairs and his wife Susan Duffus Morrow, a sort of dynastic scrapbook, of distant family origins, of their arrival in Canada, the hard work and loyal marriages – and deep religious faith and commercial probity - which kept their ambitions and enterprises on track. And so much more – diaries, letters, poems and essays, celebrations, marriages to invigorate and extend the family dynamic, and inevitably funerals of those who had honourably run their course. 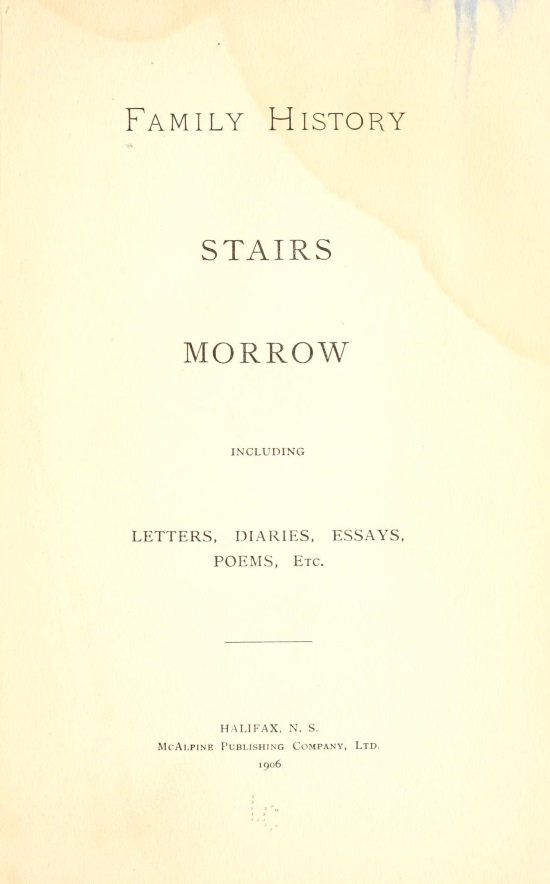