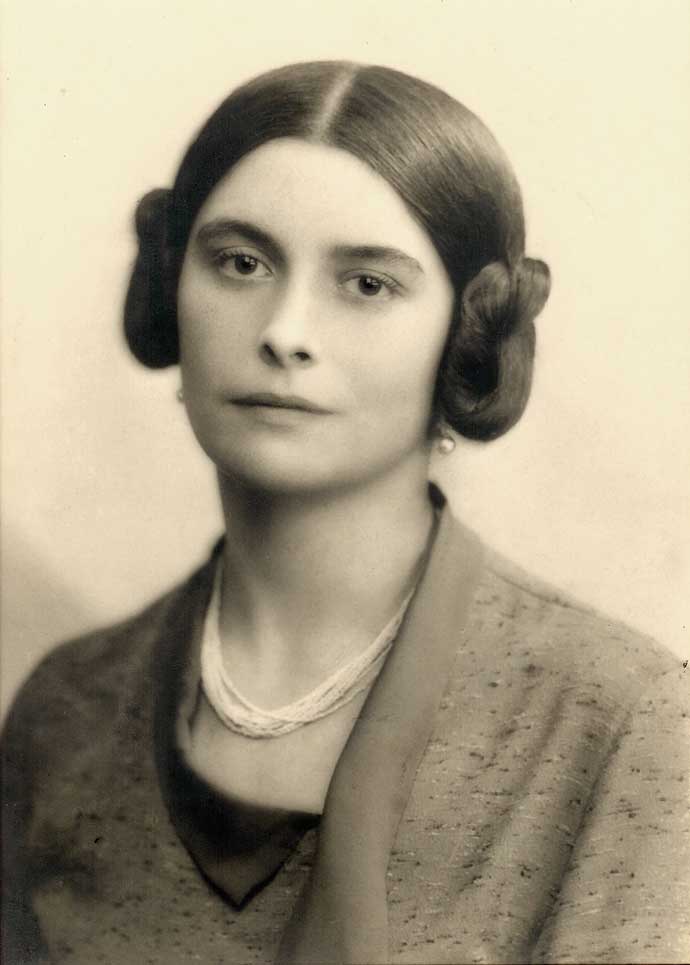 I've seen her described as passionate rather than beautiful, but these qualities aren't mutually exclusive and from the evidence of this photograph, I'd say that she possessed both in super-abundance. In later years she tended towards stoutness, but nevertheless managed to work her through over 100 lovers in addition to two husbands of her own and her long-term partner Jack. She was renowned for pep-talks, to which she would subject every new female acquaintance, on the importance of effective contraception! 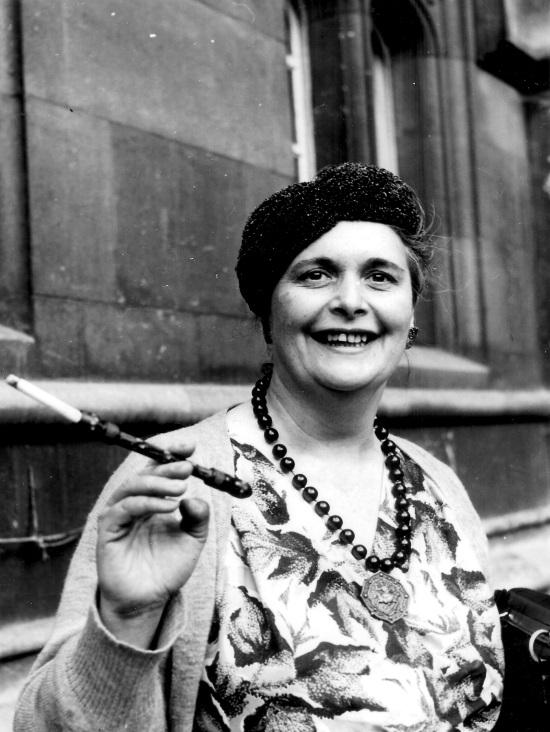 She was also described as being monstrously selfish, and was culpably neglectful of her three sons, but was capable of great kindness and courage, particularly during the Second War, during which she was interned in France, when she made great efforts to save many hundreds of Jews from the clutches of the Nazis. She had been born into great wealth and luxury in Tsarist Russia, but during her internment converted to Communism (of the idealistic kind, not the murderous Bolshevik variety) and spent her last decades living in a small Cornish cottage with a retired English trade-unionist.

Her lifetime's journey from St Petersburg to Bodmin Moor was almost unbelievably eventful and colourful, and has been the subject of countless articles in the media to this very day.

The first I read was a profile in the Observer (18 Oct 1987), which my wife Sonia had filed away years before. It was by then more than a little creased and mottled, but provides a very good overview of Sofka's life and times, as also does Wikipedia.

Her autobiography Sofka: The autobiography of a princess was published in 1968, and very highly admired, though I don't have a copy of it, as its second-hand prices on Amazon are astronomical. One of the Amazon reviews is by Penny FitzLyon, Ian Zinovieff-FitzLyon's daughter. It's a great pity that no press reviews could have survived from that pre-internet era.

However, there are a multitude of excellent – and wide-ranging – reviews of Red Princess: A Revolutionary Life, the much more recent biography by her grand-daughter and namesake Sofka Zinovieff, Peter Zinovieff's daughter.

and two profiles 1,   2 in addition to that in the Observer already cited.

You might well ask why this narrative should be included, as the dramatis personae are entirely unrelated to me, and are (or were) all of much higher socio-economic background than myself. But, of course, the usual mission statement applies here as elsewhere – this is a defining backdrop against which I have subsisted for over 50 years, and which has inevitably coloured my take on life.

Your next question would inevitably be, well, how did it all come about? Via Sonia herself, of course, without whom nothing in the Family unit would have come into being.

Having felt a mutual romantic inclination towards the 15-year-old son of a family who had visited Ardnagashel that summer, she (of like age) corresponded with him for some time afterwards, as teenagers do. The family went elsewhere the following year, but the bar had been set high as the boy in question was a pupil at Eton.

A little later on, as schooldays in Bray drew to an end, the vie Bohème of Dublin, and Trinity College Dublin (TCD) student life in particular, began to appeal and it was there that she was introduced by her cousin Jalik to Paddy Skipwith, Chris Kendall (all three of whom were reading geology) and a multitude of other high-spirited contemporaries. Her teenage romance with the eminently likeable Paddy (though a mere Harrovian) continued after she moved to London for secretarial training, but eventually came to naught – though it did introduce her to his extraordinary mother Sofka and Sofka's partner Jack, with both of whom she got along very well.

However, the Kaulback-Skipwith-Kendall axis has been part of the picture ever since. (Indeed I was once shipwrecked with Skipwith and Kendall on the southern shores of the Persian Gulf, and Paddy kept our spirits up over 4 days or so by playing his recorder, most memorably from Gossec's Tambourin.)

Other beaux and ardent admirers followed in turn, mere playthings of an idle hour, variously hailing from Charterhouse, Marlborough, Rugby, Stowe etc, but to no avail – their credentials simply didn't cut the mustard. So it was not until I happened by that she felt at last (for some extraordinary reason, still not fully explained) that this was the Real Thing, and the bar could be lowered more or less to ankle level.

So much for the scene-setting, let's focus on the Skipwiths.

In this context the story begins with Yuri Dolgoruky, who in family legend (and to some extent in historical fact) was the founder of Moscow. The word "Dolgoruky" appears to have been a nick-name, as in Russian it is said to mean "long-armed", possibly implying that he was vengeful, or that his influence was far-reaching geographically. He seems to identify with George I of that region in the Wikipedia article about him. As a subsequent family name, it appears that Dolgoruk(i)y can also be rendered as Dolgorukov or Dolgoroukoff.

I'm indebted to the following internet sources for most of the information in the ensuing tabulation, while other sources are attributed via the appropriate links in situ.

External links to the first of these sources seem very imprecise, but once in the internal links are fully functional.

The second of these sources is particularly hard to follow, as I don't honestly understand his prefixing system, especially as there are no corresponding indentations. I would welcome any better-informed interpretations.

There is also a Wikipedia article about the House of Dolorukov but it's of no relevance to present purposes except for their rather fine coat of arms: 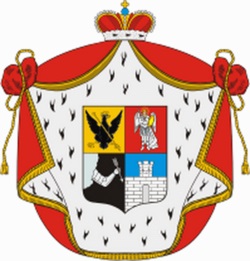 I am weaving the Dolgoruky, Zinovieff and Skipwith strands into this single table, as their generation patterns are more or less in step with one another. It seems to work pretty well.

Helen Smith, of Lysterfield in Australia, recollects (Nov 2018) a very touching visit by Sofka Skipwith in 1971 to Paddy's first wife Gillian Skipwith, by then divorced from Paddy, and their two children Zara and Sasha (for whom Helen was employed as nanny). The family was at that time living in Bramham Gardens, Earls Court.

Helen also well remembers Sofka's very kind son Patrick and his lovely girlfriend Ashkain. Sadly their marriage too was to end in divorce.

While I've yet to read Red Princess, the profiles of Sofka that I've read do seem to be unanimous that she was overwhelmingly focussed on her indefatigable love-life, and was a very neglectful mother, so it's reassuring to have this account of her kindly visit to the grandchildren of that time.

The backgrounds of the Zinovievs and Dolgorukovs have been given in sufficient detail above, but what of the Skipwiths themselves?

Wikipedia takes them back to the creation of the principal baronetcy in the 17th century, as reproduced below, but their roots go further back to the Norman usurpation of Harold II, and indeed further still, as will become evident.

The heir apparent to the baronetcy is the present holder's only son Constantine Alexander Paul d'Estoteville Skipwith (born 2006).

Wikipedia also provides a pointer to the early Norman era:

In 1870–72, the Rev John Marius Wilson's Imperial Gazetteer of England and Wales described Skipwith like this:

SKIPWITH, a township and a parish in the district of Selby and N. R. Yorkshire. The township lies 3½ miles N of Duffield-Gate r. station, and 5 NE of Selby; has traces of possession by the ancient Britons; was held by Patrick de Schwywyc immediately after the Norman conquest; and gives name to the Skipwiths of Newbold. Acres, 2,569. Real property, £2,006. Pop., 299. Houses, 61. The parish contains also the township of North Duffield, and comprises 5,789 acres. Post town, Selby. Pop., 769. Houses, 157. The property is sub-divided. The living is a vicarage in the diocese of York. Value, £300. Patron, the Lord Chancellor. The church is good, and has a Saxon tower. There are an endowed school with £14 a year, and charities £21.

And we can connect with this to some extent via the www.geni.com website (though the individual entries are managed by a variety of contributors, so that the dates are sometimes out of kilter with one another, and sometimes downright suspect):

Edward Kimber and Richard Johnson, editing and extending an earlier work by Thomas Wotton, published in 1741, picked up the story in detail, starting from Robert d'Estouteville, Lord of Cottingham [III] (?1040 -?1107): 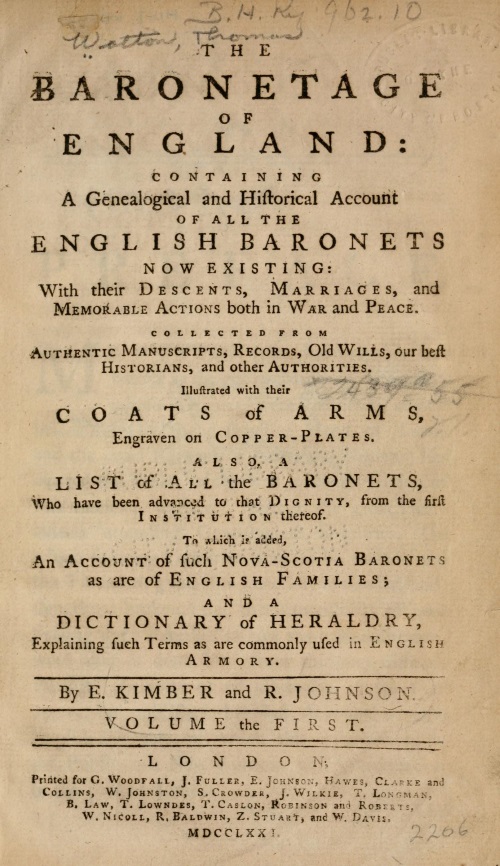 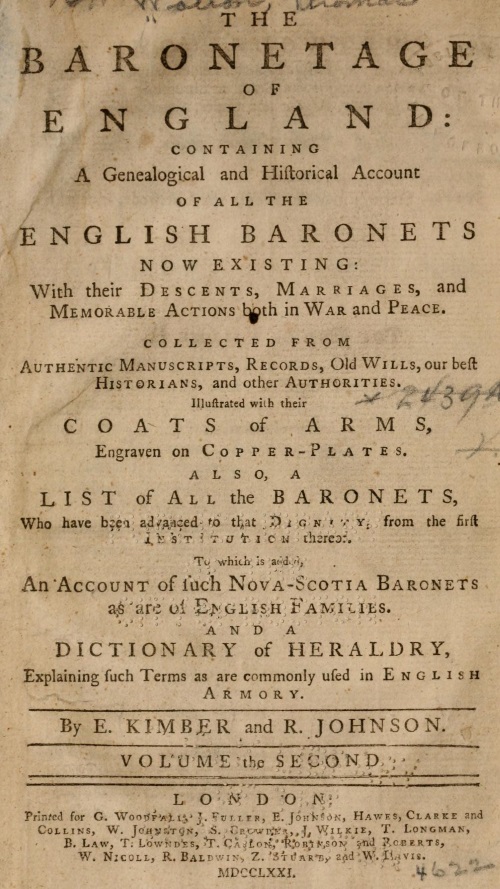 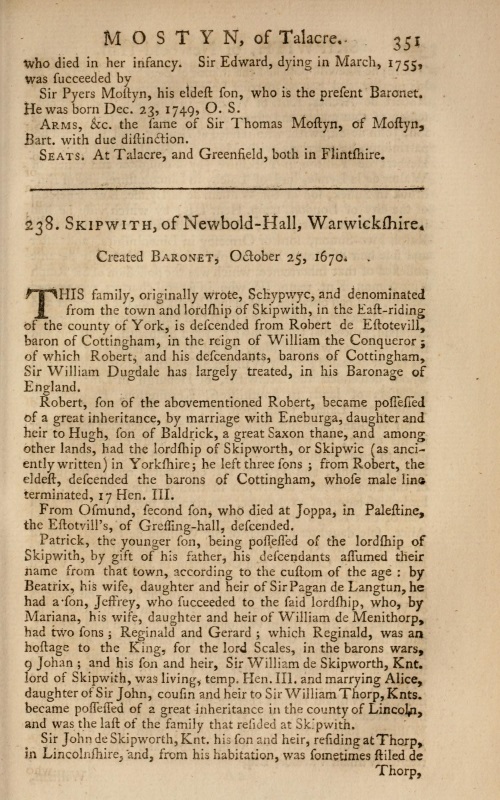 As did the Rev William Betham, who evidently relied pretty heavily on Kimber and Johnson's text, but, to his credit, structured and formatted it to make for much easier reading: 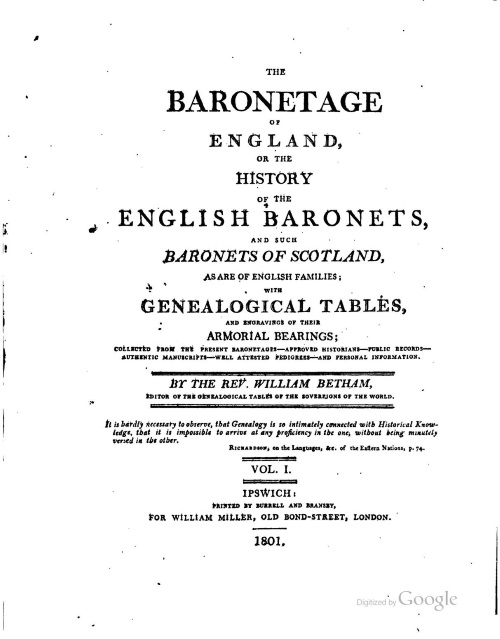 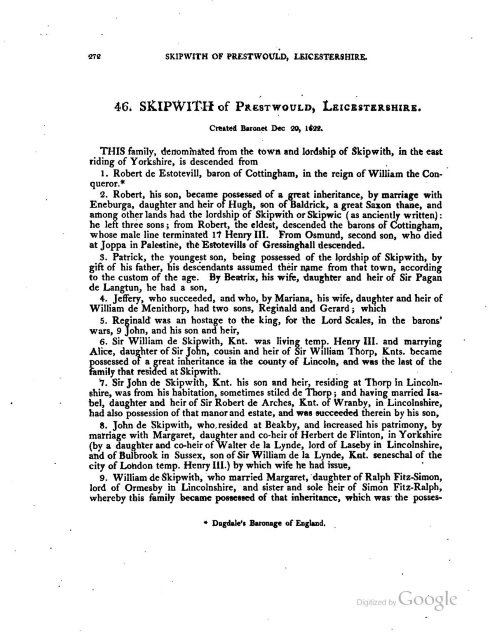 By far the most readable of the Skipwith histories is that of 1867 by Fulwar Skipwith (18 Feb 1810 – 22 Jun 1883), one of the "Heaven-born" of the ICS. He begins with Robert le Grandbois d'Estouteville, and quotes a number of sources to the effect that Robert was acclaimed by for his prominent role in the Battle of Hastings. This may well be true, but doesn't seem to be substantiated by the "List of Proven Companions" which is defined as those whose active participation in that unhappy day for England is established beyond doubt.

What of course isn't at all in question is that he was lavishly endowed with large estates by the victorious usurper, but returned to Normandy, and eventually fell from favour, thereby being dispossessed and imprisoned, in the reign of Henry I.

It was his son Robert d'Estouteville who restored the family fortunes, not least by his marriage to the Saxon-born heiress Eneburga by means of which he acquired inter alia the lordship of Schypwic, which passed in due course to his younger son Patrick ... 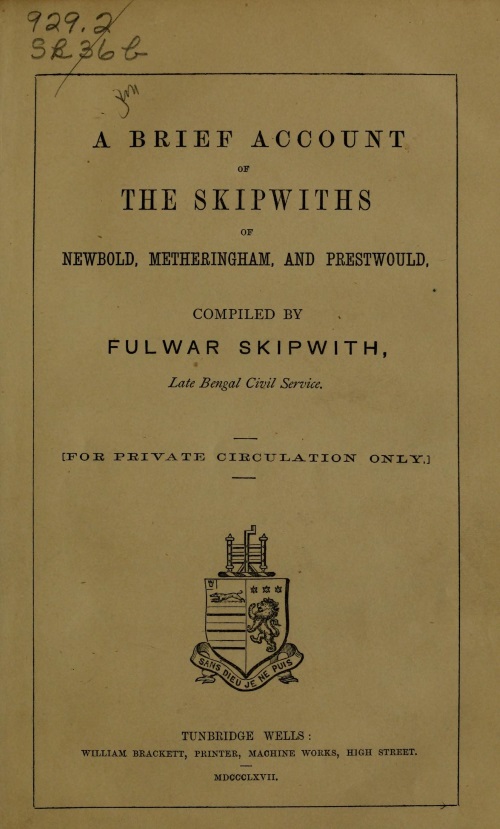 As always with such online facsimile versions, the maximal screen display can be achieved by using a judicious combination of the options Fullscreen / F11 / Hide Nav Bar / Zoom custom ...%
tonyreinke.com/2009/08/19/advice-on-reading-samuel-johnson/

Mr. Elphinston talked of a new book that was much admired, and asked Dr. Johnson if he had read it. JOHNSON: "I have looked into it." "What," said Elphinston, "have you not read it through?" Johnson, offended at being thus pressed, and so obliged to own his cursory mode of reading, answered tartly, "No, Sir, do you read books through?"

And in case you wonder, neither do I, nor even could I, given the sheer size of many of the discursive reference volumes from a more leisurely age than our own, and the number and complexity of family connections to be investigated.