The House of Dun

The word house means, of course, a residential building. But the word House signifies an extended family (such as might indeed have originated from a single dwelling in the far distant past). Think perhaps of the Royal Houses of Windsor, Saxe-Coburg and Gotha, and so on back. All our ruling dynasties since 1066, in fact, none of them English in origin, most of them not even British in the modern sense!

And of course there are corporate brands such as House of Fraser, the retail chain that once included Harrods under its corporate roof. That's definitely British, well, Scottish anyway. And that brings me belatedly to the point that the great families of Scotland do often seem to have identified with a particular great house or castle, and in that sense House and house were broadly synonymous.

And so it was with the House of Dun – the Erskine family line whose senior members – the Lairds of Dun – dwelt in an unbroken line from 1392 until 1980 in the great house also known simply as the House of Dun. It had previously been occupied by the eponymous family of Dun, also most distinguished: a modern 'custom' emblazon of their arms is shown below, together with the long-established arms of Aberdeen Grammar School, founded even earlier in 1257. The lower RH field clearly reproduces the conventional arms of Dun, but the lower LH field depicts a fort, or fortified tower, with three turrets. This is a pun on the family name – which in both Scottish and Irish Gaelic means "fortress". The three turrets and three padlocks may just be a numerical coincidence, but they all strengthen the common theme of security and safety. The Dun family's connection with the school dates from the late 16th and early 17th centuries, when indeed their family records begin, but their contact with the Erskines goes back to 1348, when – by some means or other – the ownership of the house and estate passed to Sir Robert Erskine of that Ilk: click here for such details of this as I've been able to find. 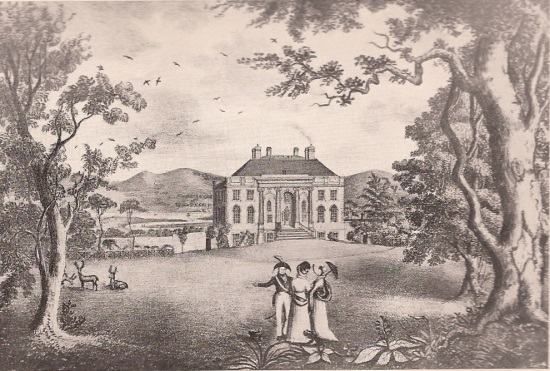 House of Dun, seen from the north side, late 18th century 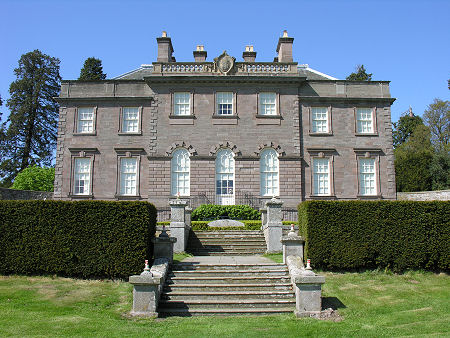 House of Dun, seen from the south side, today

The family chronicler, defined by Johnson as a harmless drudge, along with lexicographers, is indeed fortunate to have the benefit of an earlier soulmate, who has provided a template, a progress report, on which to build. Principal amongst these was the delightful Violet Jacob, one of those one hopes to meet in Heaven if circumstances and qualifications permit.

Not conventionally beautiful (though neither am I, God wot), she was one of those people with whom one feels a special bond across the years. Her book The Lairds of Dun gives an unrivalled account of those Erskines over almost six centuries. Stronger on events and relationships than dates, perhaps, but the fold-out family tree inside the back cover has been crucial to my own understanding of what unfolded from the time of Sir Robert Erskine of That Ilk (1310 – 1385), father of both the 1st Laird of Dun and the 12th Earl of Mar, through to Augustus John Kennedy-Erskine 20th Laird of Dun.

Other sources that have proved invaluable, or at least could be usefully consulted, include

Not to beat about the bush, the whole of 'High Society' in the later Hanoverian era seems to have been a heaving sh*g-fest, a phrase popularised by The Times in recent years, and family relationships became a free-for-all.

For example, Augusta FitzClarence's natural brother Maj Gen George FitzClarence, 1st Earl of Munster, fathered William George FitzClarence, 2nd Earl of Munster, with Mary Wyndham, natural daughter of George O'Brien Wyndham, 3rd Earl of Egremont, and young Wm Geo was born at the House of Dun! As we see in the table above, in due course he actually married his first cousin, Augusta FitzClarence's daughter Wilhelmina Kennedy-Erskine. Although not technically incestuous, of course, it was still too close for comfort, as a number of their children died early in life.

This episode, though he wasn't entirely conversant with its details, was one of my father's party pieces when deputed to take me for a walk in my pre-school days. The murder of the nephews and the banishment of Margaret Erskine to the Orkneys was the gist of his tale, and it's only recently that I've learned the grisly details about her siblings' fate. Also, in fact, only the elder child died.

To better understand the story, we should first absorb a few dates (as per the table above):

Only if both children were to suffer an untimely demise would Uncle Robert succeed as 11th Laird. And the wicked uncle decided to arrange just such a scenario. He rather surprisingly opted to confide this intention to his three sisters, and between them they concocted a plan to poison the youngsters with herbal potions obtained from Jonet Irving, a local witch, or 'wise woman' as she doubtless preferred to be called. (Not many people know that my brother and I were consigned to the care of a self-styled witch back in the 1950's, though hopefully I can tell you more about her elsewhen.)

The poison, if indeed it was effective, took nearly three years to work, and in an age when life expectancy was so pitifully low, and forensic evidence so utterly negligible, it would have been very hard to distinguish any one possible cause of death from all the others. Nevertheless, confessions were obtained from all four conspirators. Three were sentenced to death and eventually beheaded in public, but Helen, the youngest and apparently least culpable, was merely banished to the Orkney Islands.

The full story has been recounted by Violet Jacob in The Lairds of Dun pp 147-162 and is also told on pp 28-29 of The Erskine Halcro Genealogy, A Genealogical Study of the Ancestors, Kindred & Descendants Of the Rev Henry Erskine, Ebenezer Erskine Scott; Geo. Bell & Son, London, 1890 – also available in facsimile format: