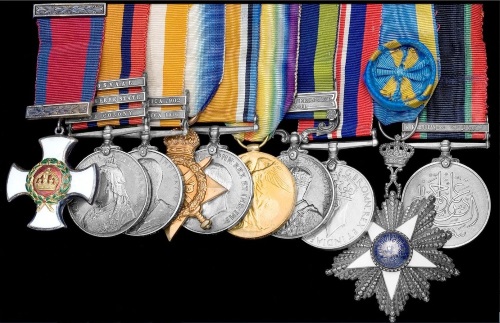 The Great War D.S.O. group of ten awarded to Lieutenant-Colonel Samuel Hutchins, Royal Irish Regiment, who served on the Dilling patrol on secondment to the Egyptian Army, and at Galipolli, before reverting to command the Camel Corps in the Canal Zone and Palestine – for which services he was awarded his D.S.O.

Hutchins was mentioned in Egyptian Special Army Order of 12 June 1911. Operations in Jebel Tagoi, South Kordofan. 'Brought to the notice of H. H. the Khedive for good services during the recent operations in South Kordofan'. He served at Bahr-el-Ghazal 15 November 1911 – 8 June 1912.

He was commended on 20 October 1912. 'El Bimbashi Hutchins was in charge of the mule transport season to Yambio, Bahr-el-Ghazal and to Yei, Mongalla, Sudan 1912. Sirdar sends his appreciation of good and arduous work in charge of No1 Company Transport'.

On 11 April 1915 Major Hutchins landed on Gallipoli – still an officer attached to the E.A.

Letter of thanks forwarded from the Sirdar (Wingate):

'Lt. Col. Hutchins was in charge of the Supply Depot at Cape Helles, and did admirable work under the most trying conditions, carrying on under heavy fire regardless of his personal safety. He was the only officer to fulfill that position who could stand the strain of constant work under frequent shelling' (Maj. Gen. Fred Krol, Director of Supplies, Dardanelles, 2 February 1916).

He then returned to the Mongalla District, 9 September – 31 December 1915.

Leaving the Egyptian Army on 2 April 1916, he was appointed Temporary Lieutenant-Colonel, 3 April 1916. On 7 April he was placed in command of the Camel Corps in Canal Zone. He had direct control over six Egyptian Camel Companies and 4th Indian Camel Corps, comprising of some 54 officers, 8,000 men and 15,000 camels. He saw subsequent service with camel transport in Sinai (El Arish) and Gaza in Palestine.

For his services he was twice mentioned in despatches (London Gazette 5 November 1915; 6 July 1917); awarded the Distinguished Service Order (London Gazette 6 June 1917); granted permission to accept and wear the Egyptian Order of the Nile 4th Class and was granted the brevet of Lieutenant-Colonel.

Hutchins was promoted to Lieutenant-Colonel in January 1927, with seniority of November 1923. Posted to Peshawar, India as A.D.S. & T. 16 September 1925. Commanded Heavy Repair Shop C. II, Peshawar 9 May 1929. Took over as A.D.S. & T. Peshawar Division 28 May 1929. Commended: 'His duties during the past hot weather, during the civil disturbances and incursions by the Afridi's have been very heavy' 9 October 1930. For his services he was awarded the T.G.S. Medal with clasp. Placed on the Half Pay List in January 1931, he returned home to a 2,500 acre estate at Tanfield Lodge, Ripon, Yorkshire.