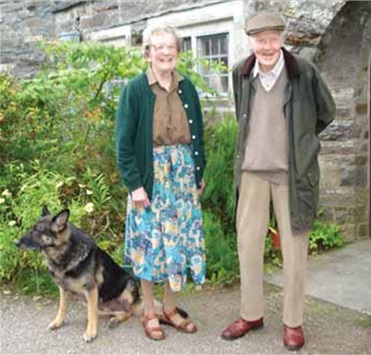 Phillada, Lady Haskard, the widow of Sir Cosmo Haskard, died in hospital near her home Tragariff, County Cork, on July 7, 2017.

She was born in 1931, the daughter of Sir Robert Stanley, a senior colonial civil servant and his wife Ursula, née Cracknell.

Phillada accompanied her father to various posts in the Mediterranean, Caribbean and Western Pacific before herself joining the Colonial service. She was working in the secret registry of the Nyasaland (now Malawi) Secretariat when she met Cosmo Haskard: they married in 1957.

Cosmo was serving in Nyasaland in 1959, when disturbances broke out in the Northern Province, where he was provincial commissioner. He noted that his wife, as a volunteer, had kept a precise 'occurrence diary' during these events which contributed to his superiors' high opinion of his conduct during the unrest.

The Haskards moved to the Falkland Islands in 1964 accompanied by their son Julian, born in 1962. In Sir Cosmo's words, 'they found the Falklands a place very much to their liking'; Julian went to the Stanley junior school and Lady Haskard enjoyed the role of Governor's wife. She found herself pressed into service in September 1966 when an Argentine DC4 airliner was hi-jacked to Stanley and - in Sir Cosmo's absence in London - she took over enciphering the reporting telegrams to Whitehall.

The Haskards retired from the Falklands in 1970 and in 1972 they settled in the family home at Tragariff on the shores of Bantry Bay. They kept in close touch with their Falklands friends and often welcomed them at home.

Lady Haskard took great care of her husband who was becoming increasingly frail as he approached his hundredth birthday which they celebrated in November 2016. He died on 21 February this year and she followed him after a brief period on 7 July. She was buried next to Sir Cosmo in Bantry on 20 July. We send our sympathy to her son Julian, his wife Michelle and their sons Cosmo, Piers and Hugo.