Sir George Hutchins (died 1705) was an English lawyer and politician, a Member of Parliament and king's serjeant.

He was the son and heir of Edmund Hutchins of Georgeham in Devon. On 19 May 1666 he entered Gray's Inn, and was called to the bar there in August of the following year.

At Easter 1686 Hutchins was made serjeant-at-law by James II, and in May 1689 was chosen king's serjeant to William III, who knighted him the following October. He became Member of Parliament for Barnstaple in the English general election, 1690. In May 1690 he succeeded Sir Anthony Keck as third commissioner of the Great Seal, and acted until the elevation of Sir John Somers as Lord Keeper on 22 March 1693. Hutchins then resumed practice at the bar, and claimed his right to retain his former position of king's serjeant. The judges decided against him, on the ground that the post was merely an office conferred by the crown; but the king settled the question by reappointing him his serjeant on 6 May. He died at his house in Greville Street, Holborn, on 6 July 1705.

Hutchins married, first, Mary, daughter of Sir William Leman, 1st Baronet, who died in 1695; they had at least three children. His second wife was Sarah, daughter of Sir William Leman, 2nd Baronet, and so niece to his first wife, whom he married in 1697. On the marriage in 1697 of his two daughters, Hutchins gave each of them a portion of £20,000. The husband of Anne, the second daughter, was William Peere Williams. The younger daughter, Mary, married Richard Minshall.

HUTCHINS, SIR GEORGE (d. 1705), king's serjeant, was the son and heir of Edmund Hutchins of Georgeham in Devonshire. Edmund Hickeringill [q. v.] once amused the court of chancery, and won his cause, by saying of Hutchins, who was counsel against him, that they were something akin to each other, not by consanguinity, but by affinity; for he was a clerk, and Hutchins's father was a parish clerk (LUTTRELL, Relation of State Affairs, 1857, iv. 651). On 19 May 1666 he entered at Gray's Inn, by which society he was called to the bar as early as August the following year. At Easter 1686 he was made serjeant-at-law by James II (ib. i. 529), and in May 1689 was chosen king's serjeant to William III, who knighted him in the following October (ib. i. 598). In May 1690 he succeeded Sir Anthony Keck as third commissioner of the great seal, and acted until the elevation of Sir John Somers (afterwards Lord Somers) [q. v.] to the lord-keepership on 22 March 1693. Hutchins then resumed practice at the bar, and claimed his right to retain his former position of king's serjeant. The judges decided against him, on the ground that the post was merely an office conferred by the crown (3 LEVINZ, 351); but the king settled the question by reappointing him his serjeant on 6 May (LUTTERELL, iii. 93). He died at his house in Greville Street, Holborn, on 6 July 1705. His professional gains must have been considerable, for on the marriage in 1697 of his two daughters, afterwards his co-heiresses, he gave each of them a portion of 20,000l. (ib. iv. 289). The husband of Anne, the second daughter, was William Peere Williams, the well-known chancery reporter. 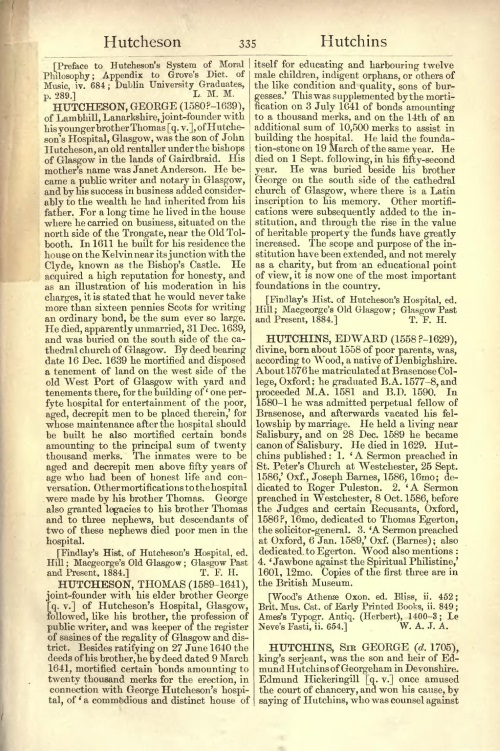 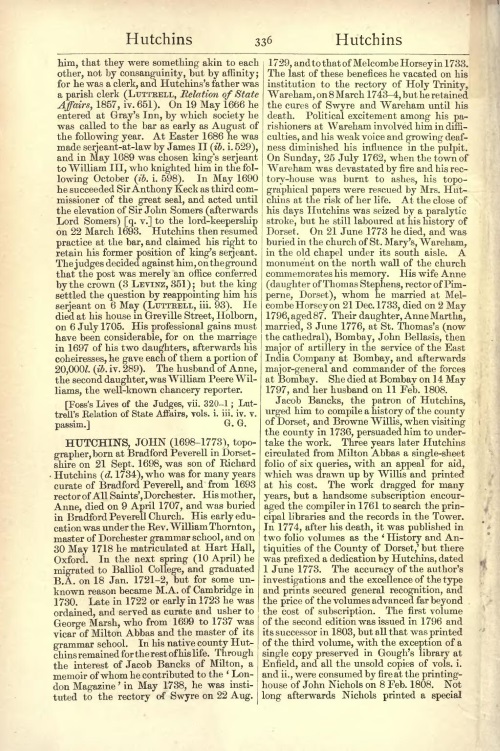 Biography
From comparatively humble beginnings, Hutchins became a wealthy and high-profile lawyer in the reign of Charles II, and from the later 1670s was employed as counsel in many cases before the House of Lords. He was knighted in 1689 by William III soon after becoming King's serjeant. In the 1690 general election he was returned for his native borough of Barnstaple, Lord Carmarthen (Sir Thomas Osborne✝) noting him in several lists of the new Parliament as a supporter of the Court. On 26 and 29 Apr. he was probably the 'Serjeant Hutchinson' [sic] who spoke in favour of imposing the abjuration oath. In the House on 5 May he ventured his opinions on the problems of retaining a balance of authority in both the King and the Queen in the regency bill:

"this doubt, whether the Queen is not so amply and fully Queen as in the Act of Settlement, may be of dangerous consequence, and how far the commissions of the peace may be void. This may affect our alliances abroad. The King may see more in Ireland than can be seen here. I humbly propose that this may so pass, as not totally to divest the King of his executive power . . . Possibly there may be many inconveniences for the administration of the government in two persons, and to divert the King of it is not to be thought of. I move that the government may be executed in the name of the King and Queen."

In May he was appointed third commissioner of the great seal, replacing Sir Anthony Keck*. During the preparations for the next session Hutchins was minuted as one of the Commoners who 'have greatly assisted the King's affairs' and who were to be 'complimented' at a 'general meeting'. His conduct in the ensuing session enabled Carmarthen to class him once more as pro-Court in December. On 28 Nov. 1691 he spoke on behalf of the East India Company, and in doing so may well have offended his fellow MP, Arthur Champneys, who was one of the interloping syndicate who were aiming to break the company's monopoly. He was the target of a minor 'Country' attack on him and his fellow commissioner of the seal, Speaker Trevor, on 29 Dec. for having discouraged Edward Stephens, a Middlesex j.p., from prosecuting small traders for breach of the Lord's Day. He effectively parried this by indicating that Stephens and several associates had gone farther than the law permitted by running 'an informing office in Lincoln's Inn' and fining transgressors when the law only permitted him to confiscate goods and merchandise being sold. On 2 Jan. 1692, on the bill to prevent the escape of prisoners, he put forward an instruction to its committee that bail procedures be simplified, and that local commissioners, rather than judges, be empowered to take affidavits. He opposed the bill for lessening the rate of interest at its second reading on the 8th; and in accordance with his previously expressed support for the East India Company opposed the bill for a new company on the 22nd. In the next session he opposed the triennial bill on 9 Feb. 1693 on the premise that it took 'away the inherent right in the King to preserve himself and his people. That the dissolution of parliaments by Act of Parliament was the last consequence especially at this time when the nation is involved in such a war as it is.' In discussion on a private bill on 6 Mar. touching Lord Pembroke (Thomas Herbert✝) he spoke 'strongly' against the suggestion that certain legal records in relation to a suit could be altered.4

Hutchins' term as a commissioner of the great seal (which had brought him £1,500 p.a.) came to an end in the spring of 1693 when Sir John Somers* was made lord keeper, and he resumed his practice at the bar. He claimed to retain his former position of King's serjeant, but when the judges ruled against him on the grounds that it was an office conferred by the crown, the King reappointed him. A grant which he had made to the crown of £750 was repaid to him at this time. During the 1694–5 session the Treasury secretary Henry Guy* listed him as a 'friend', probably in connexion with the projected attack on Guy in the Commons. At the time of his first wife's death in July 1695 Hutchins was said to be worth £60,000, and on the marriages of his two daughters, one to the lawyer and future MP Williams Peere Williams, he gave each a dowry of £20,000. Having stood down at the October 1695 election, he made no subsequent attempt to re-enter the House. He was reported as 'dangerously ill' in September 1703 but lived on until dying at his house in Greville Street on 6 July 1705. He was buried at St. Andrew's Holborn.5