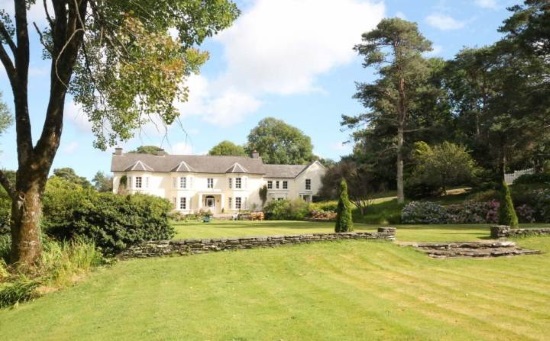 Hugh Hutchinson, the onlie begetter of Blackrock House, died in 1728, having directed in his Will that his wife Deborah should live with his son Samuel, presumably in that same residence. At some point in the 1750's, Samuel sold it to (Counsellor) Richard White, and thereafter the Hutchinsons seem to have faded from the scene.

And at that same time, Thomas Hutchins (d 1754) removed to Ballylick(e)y House – coincidence perhaps, but a possible indication that there was room only for one major family in the Blackrock locality.

His descendant Arthur Hutchins (1770 – 1838) presumably terminated the lease when he moved into the newly-constructed Ardnagashel House in about 1800.

At some unestablished date thereafter, the Graves family took up residence in Ballylickey house, as per the cuttings below.

On the boundary of Cork and Kerry, amidst sheltered lawns, flower gardens and parkland, and bordered by sea, river and mountains, stands Ballylickey House, commanding a magnificent view over Bantry Bay. Built some 300 years ago by Lord Kenmare as a shooting lodge, Ballylickey has been the home of the Graves family for over 4 generations. Robert Graves, the poet, was an uncle of the present owner. The house was burnt down 8 years ago, but it has been rebuilt incorporating the best of the old features with a new standard of comfort.

Ballylickey, home of the Franco-Irish Graves family for four generations, lies hidden among the rugged inlets of majestic Bantry Bay. This secluded Manor House has the ambience of a beautiful family home, cherished and nurtured over the centuries.

Originally built over 300 years ago as a shooting lodge by Lord Kenmare it was carefully restored by the present owner managers the Graves family in the late 1940's. Visited over the years on many occasions by the poet Robert Graves, an uncle of the present owners. Ballylickey became a haven for writers, artists and musicians.

Home to the Graves family for centuries, Ballylickey House is a magnificent Manor overlooking Bantry Bay at Ballylickey. Built originally in 1650 but rebuilt after a fire in 1976 to its exact original splendour, the property stands on approximately 10 acres of mature gardens, a mix of manicured lawns and flower beds, wild gardens with riverside walks and an abundance of shrubs and trees. This charming home overlooks Bantry Bay from its private setting amongst century-old trees and gardens where the River Ovane flows into the bay.