I'm extremely grateful to the archivist of Charterhouse for providing access to the Charterhouse Register1,   2 from which the extracts below have been reproduced, and for the additional information also reproduced below.

He arrived at the start of the Oration Quarter in 1940, and was assigned to the Saunderites House. 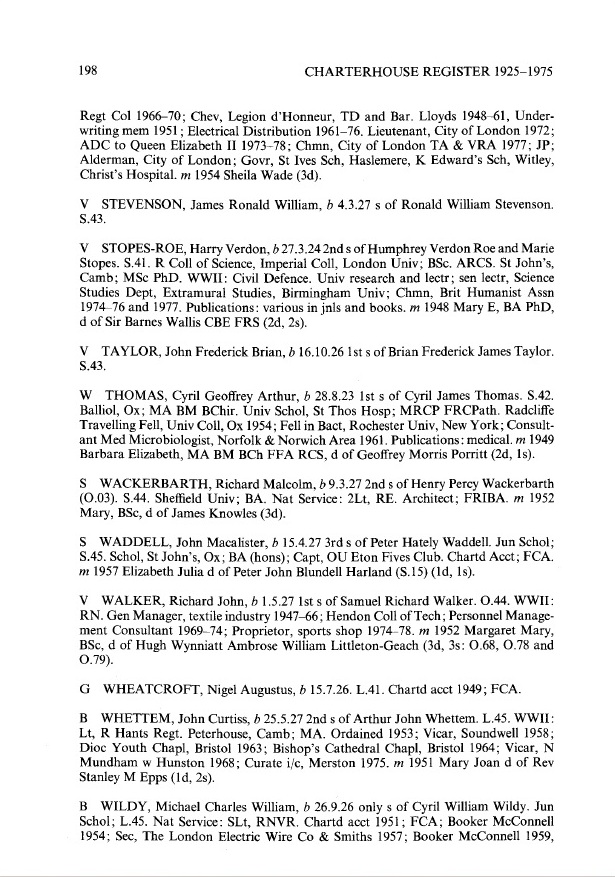 I don't know what "Jun Schol" (clearly Junior Scholarship) indicates – perhaps something to do with a bursary to cover his earlier years at Charterhouse.

He left at the end of the Summer Quarter in 1945, having gained a scholarship to St John's College Oxford.

He matriculated (ie registered) at the start of the Autumn term in 1945. He took a 3rd Class Honours degree in French and German in 1948, BA being delayed until 1951, probably due in part to his two years of National Service (1948-50). Simultaneously or subsequently, he acquired fluency in Italian also.

He undertook an almost unbelievable variety of sports, and excelled at them all. I've attempted to decode the rather cryptic abbreviations, and am open to correction. The references to "colours" rather baffle me – I've heard of "Blues", awarded by their respective Universities to participants in Varsity (ie Oxford v Cambridge) contests, and in that sense John Waddell was surely an Oxford Blue in respect of the three Varsity Fives contests in which he was involved. But "colours" seems rather vague.

The College Register has him as serving in REME (Royal Electrical and Mechanical Engineering Corps, but initially at least he was assigned to the Royal Army Educational Corps.

In 1957 he married Elizabeth Julia Harland, daughter of Peter John Blundell Harland (an Old Carthusian, Saunderites 1915). He and Julia had a son Justin and a daughter Sasha.

I gained the impression from our distant cousin Gavin Waddell, a fashion designer by profession, that John and he had become acquainted through John's temporary involvement with Savile Row, the global nerve centre of gentlemen's tailoring. I may be wrong but it's too late to confirm the truth of this with Gavin as we have parted brass rags rather unnecessarily. Maybe John had worked there whilst studying for his Chartered Accountancy exams.

At yet another point, perhaps during his time at Oxford or his subsequent National Service, he became closely acquainted with Chris and Gilly Willey who were to be such Good Samaritans to myself and my senior colleagues in the Imperial College expedition to Abu Dhabi in 1963/64, and extricated me from a rather disgraceful scrape during that time.

I very much regret that the two branches of the family were sundered so completely by circumstances. I dimly recall being taken (I was about 13) by my father as he bade farewell to a cousin, whether John or Robert, as they were about to seek new pastures abroad, but at that age I had no idea who they were.

But I do also specifically recall accompanying my father to 34 Trebovir Road in South Kensington at some time earlier when he visited John and Julia – I think it was a basement flat. It was that particular memory that served me so well with Chris Willey.

To pontificate briefly, it is the atomisation of our society at every level that (I believe) has been so responsible for the anomie and accidie that have afflicted us in these postwar generations – working-class life was fractured by slum-clearance and random relocation to high-rise blocks – middle-class connections were permanently disrupted by emigration to better opportunities in Europe and the Commonwealth. Life within an extended family structure is so much more natural to our gregarious human species than the isolated nuclear family units to which we are nowadays so often reduced.