Fashion designer Gavin Waddell's Regency townhouse in Cheltenham is a confident, unconventional, joyful, home, with rooms put together by someone who loves pattern and colour, and knows how to use them.

The entrance hall is dusty mauve, the kitchen is a bower of pink, blue, and green floral wallpaper, and the double drawing room, with its floor-to-ceiling sash windows, glows buttercup yellow. There is a table painted coral red; there are sofas upholstered in broad scarlet stripes. Confident, unconventional, joyful, these are rooms put together by someone who loves pattern and colour, and knows how to use them.

Gavin Waddell bought this spacious Regency townhouse in Cheltenham more than 30 years ago. At the time he was head of fashion at Gloucestershire College of Art and Design, and had been commuting to work from a cottage in Ross-on-Wye. He spotted a 'For Sale' sign while driving past the house one day and booked a viewing, thinking that it looked like 'a nice little place'. He was wrong on both counts. It was much bigger than expected, and had been crudely carved up into bedsits. 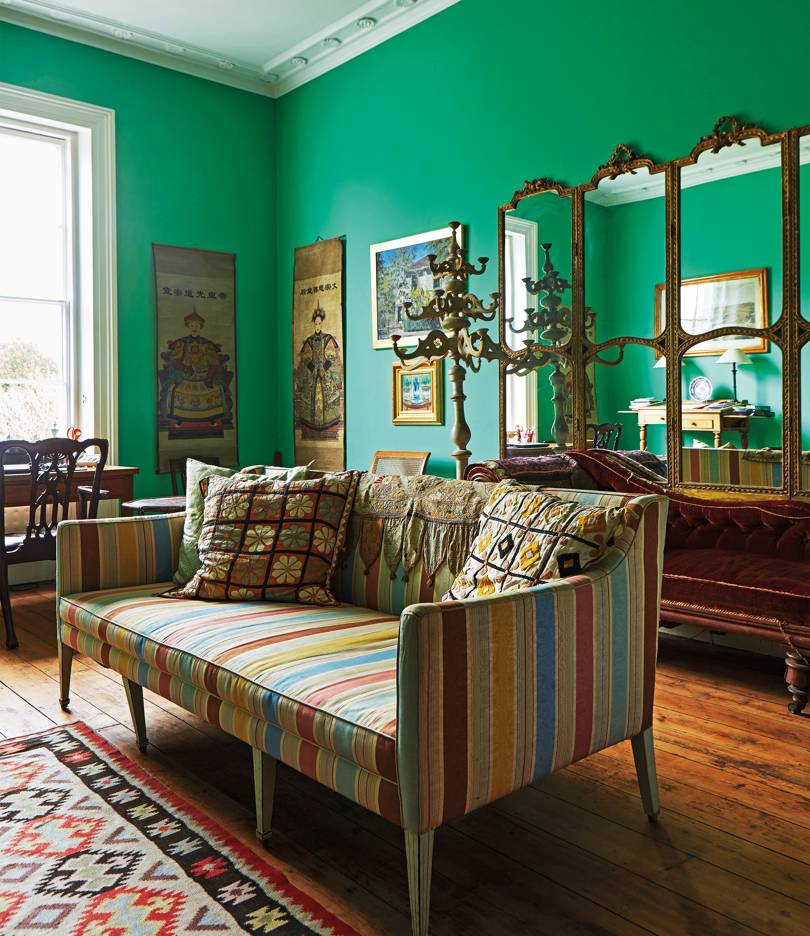 'There were two communal kitchens, with four stoves in each, posters on the walls, and 1950s tiled fireplaces. It was in a terrible state,' Gavin says, 'but I could see the potential.' Cheltenham is an elegant town, a smaller, more relaxed version of Bath, developed as a spa throughout the 18th and early 19th centuries after the discovery of mineral springs in 1716. A visit from George III in 1788 bestowed royal cachet. This house was built in 1840; substantial, semi-detached, and part of a curved 'circus' of houses of the same date. Originally there were kitchens and servants' rooms in the basement, four reception rooms on the ground floor, and five bedrooms on the floor above.

There are two large bedrooms at the front of the house, above the double reception room, one of which Gavin made into an elegant upstairs drawing room and study. Walls are a gorgeous blue-green - 'I didn't want a bright turquoise, or a dull one,' says Gavin. 'It took a lot of trial and error to find just the right colour - vibrant and yet receding.' Here, as downstairs, there is a confident mixing of styles, and periods - neoclassical and baroque, oriental and Western, old and new.

Although the fireplaces had gone and rooms had been divided, there was enough of the original fabric to encourage restoration. There were fine cornices/crown moldings and deep skirtings/ baseboards, shutters, floorboards, and even some old crown glass in the large-paned sash windows. The stone staircase is a particularly handsome survival, with its mahogany banister rail sweeping down to form a lobed and foliate newel post terminating in a large, stylised lion's foot planted stoutly on the bottom step.

Initially, Gavin directed works from a rented flat just down the road while partition walls were taken down and a wide opening knocked through between the front reception rooms to make a single space spanning the facade. A smaller reception room at the back of the house became his kitchen. He commissioned craftsmen to revive woodwork and replace missing sections of cornice/ crown moulding, and found chimney pieces in architectural salvage yards. The magnificent 18th-century carved wooden fireplace and overmantle at one end of the drawing room was first bought in pieces by his sister, the interior designer Sasha Waddell, but proved too big for her own house. 'It was coated in white gloss paint, and only cost her £100. It was the wrong period, but I realized as soon as I saw it that it was the right scale for this house,' says Gavin. 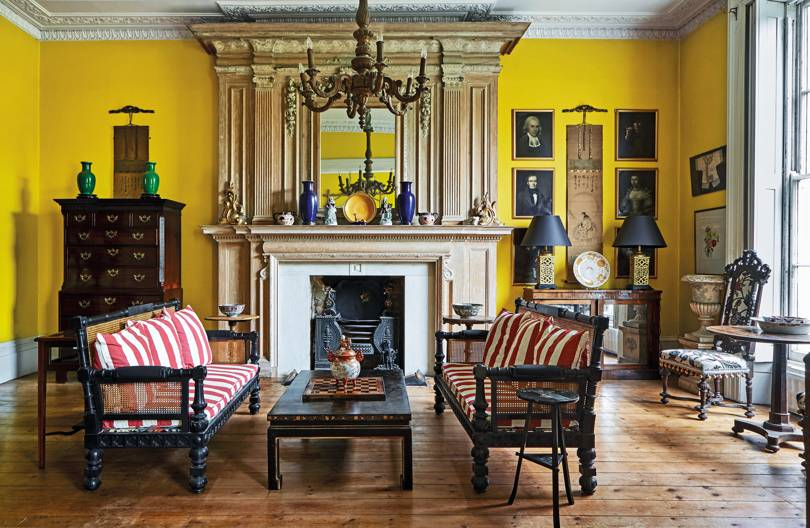 Some aspects of the decor were inspired by Regency taste, such as the Chinese yellow of the drawing room, but the dates and styles of the furnishings range widely, from the 17th to the 21st centuries, from Gothic to classical, baroque to Biedermeier - what Gavin calls 'a hotchpotch'. A 'hotchpotch' it may be, but one of unusual flair, which Gavin describes as 'a form of abstract painting in three dimensions'. It isn't everyone who would hang 18th- and 19th-century family portraits on either side of a Chinese scroll painting, or place vases of artificial bird of paradise flowers in front of an 18th-century Venetian mirror, or shocking pink towels and a yellow chair in a bathroom papered in a design of flowering lilac on a black background.

The kitchen is particularly surprising. It must once have been a morning room, and retains its chimney breast and a cornice/crown moulding starred with sculpted flower heads. Gavin bought the floral wallpaper in a sale at Cole & Son. Someone less adventurous might have used it in a bedroom, but here it is matched with black and white chequerboard linoleum, a black-tiled splashback, and fitted cupboards painted strong green, for an overall effect that is pretty but also workmanlike. Bamboo shelves display blue and white Spode plates, and there are wooden chairs with gingham cushions tucked under the red table. You could call it a hotchpotch, but look more carefully and you start to appreciate how the grid of the floor is echoed by the cushions, and how the reds, greens, and blues of the wallpaper are picked up and amplified by the china and the colour blocks of the cupboards and the table. The visual impact is bold, but the design is subtle. 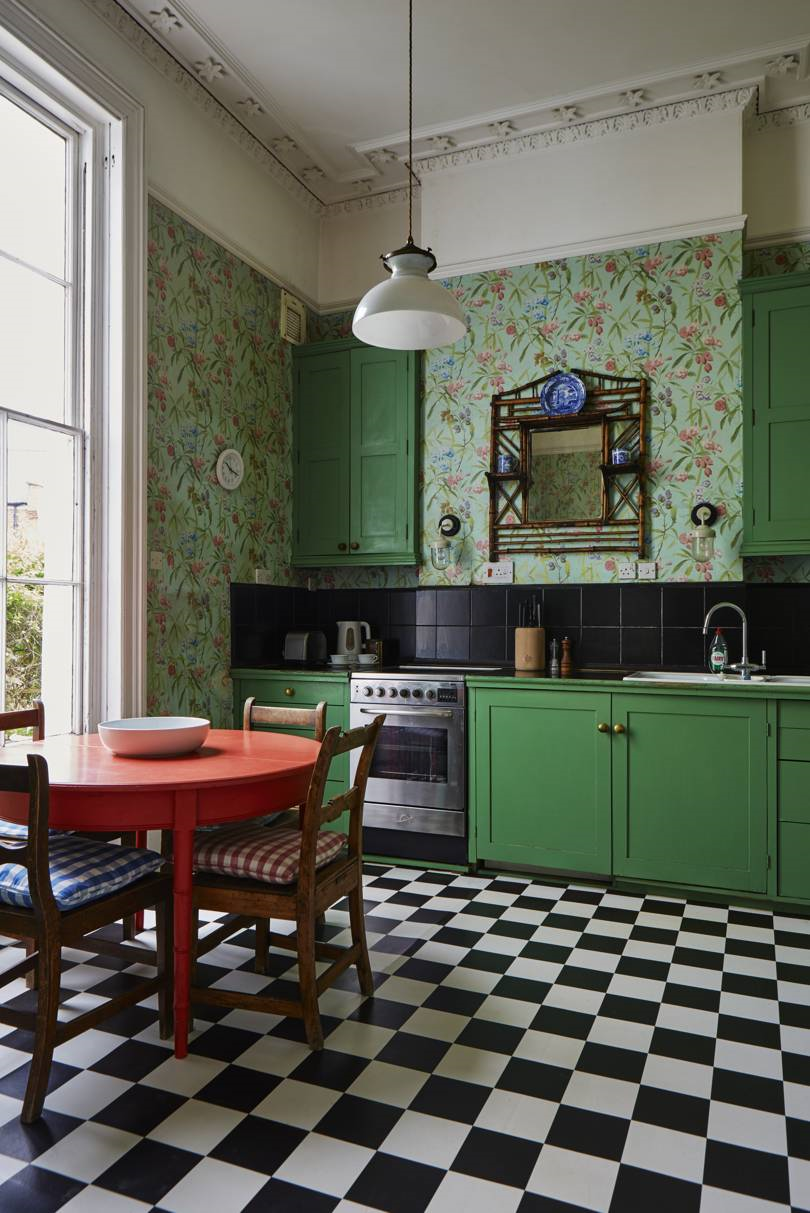 The kitchen leads off the staircase hall opposite the first door to the double drawing room, and would originally have been another reception room. A sink and oven now stand in front of the chimney breast and fitted cabinets fill the recesses on either side. The Cole & Son floral wallpaper was bought in a sale, together with almost all the other wallpaper in the house, and inspired the bright green of the cabinets and the coral red of the table. Bamboo shelving, designed by Gavin, holds blue and white china ready for use.

Gavin's sister Sasha Waddell is well known in the world of interior design, and her daughter, Atlanta Bartlett, is a stylist and author of several books on interiors. Gavin might have been even better known had he chosen to pursue his career as a fashion designer. In his twenties he was hailed as the next Yves St Laurent and ran his own couture company. He designed for Bellville Sassoon and his work appeared in all the fashion magazines. While still designing, Gavin started teaching and this became his vocation, first as head of fashion at Luton College, then North East London Polytechnic, and finally at Gloucestershire College. After he retired, Gavin wrote and illustrated the book How Fashion Works, essential reading for every serious fashion student.

Still life oil paintings by Gavin, and some of his fashion drawings, hang on the walls, and his study is lined with books on architecture, art, interiors, furniture, fashion, and also genealogy, another subject on which he published his own book. Brought up in Scotland by an artistic mother who was widowed in the war, Gavin's talent was obvious from childhood. Sasha Waddell remembers how from the age of eight he began drawing pictures of women in long dresses, one of which she still owns. This house, too, is a work of art. Or was. Gavin has moved, the house has been sold, and its contents dispersed since these pictures were taken. It seems right that the beautiful interiors he created should live on, if only between the covers of a book.