The Siege of Londonderry

The essence of what underpinned or provoked the siege of Derry, later and controversially known as Londonderry, plus the motivations and fluid loyalties of all those involved, both in Ireland and in England, is mind-bendingly complicated. Its consequences resonate to this very day in Britain (think Brexit) as well as Ireland.

The briefest and best, and least partisan, account of the origins and outcome of the siege (at least, that I could find on the internet), is as follows.

The siege of Derry began in December 1688 when 13 apprentice boys shut the gates of the city against a regiment of twelve hundred Jacobite soldiers, commanded by the Roman Catholic, Alexander Macdonnell, Earl of Antrim, which was immediately withdrawn. Retaliatory action passed to the Duke of Tyrconnel who assembled a large but poorly ordered Jacobite force commanded by Sir Richard Hamilton to march north against the Ulster Protestants. The deposed King James II, who had travelled from France to Ireland in March, took charge with the aid of two French generals. Arriving at the gates of Derry on 18 April 1689, he was greeted by a cry of "No Surrender!" The siege was lifted on 28 July 1689 (Old Style) when two armed merchant ships, the Mountjoy and the Phoenix, sailed up the River Foyle to breach a timber boom which had been stretched across the river, blocking supplies to the city. The ships' approach was covered against the Jacobite besiegers by cannon fire from the frigate HMS Dartmouth, under Captain (and future Admiral) John Leake. The Mountjoy rammed and broke the barricading boom at Culmore fort and the ships moved in, unloading many tons of food to relieve the siege. Three days later, the besieging forces burned their camps and departed. It was reported that some 4,000 people (about half the population of the city) had died of starvation or injury. Many had been forced to eat dogs, horses and rats.

So presumably this, or something like it, is what is detailed in his account of the event. I don’t know, of course, whether he was simply translating an existing narrative into Greek, or devising it himself. But the really interesting aspect is that he chose to model his style, both literary and analytical, on that of Thucydides, a Greek historian still much admired by modern historians and military strategists for his dispassionate approach to then contemporary events (the Peloponnesian War between Athens and Sparta).

Thucydides Θουκυδίδης Thoukydídēs; c. 460 – c. 400 BC) was an Athenian historian and general. His History of the Peloponnesian War recounts the fifth-century BC war between Sparta and Athens until the year 411B C. Thucydides has been dubbed the father of "scientific history" by those who accept his claims to have applied strict standards of impartiality and evidence-gathering and analysis of cause and effect, without reference to intervention by the deities, as outlined in his introduction to his work.

He also has been called the father of the school of political realism, which views the political behavior of individuals and the subsequent outcomes of relations between states as ultimately mediated by and constructed upon the emotions of fear and self-interest. His text is still studied at universities and military colleges worldwide. The Melian dialogue is regarded as a seminal work of international relations theory, while his version of Pericles' Funeral Oration is widely studied by political theorists, historians, and students of the classics.

More generally, Thucydides developed an understanding of human nature to explain behaviour in such crises as plagues, massacres, and civil war.

The prize-winning essay was published by the University, though I expect that sales were modest, even in an age when all properly-educated men were expected to have at least a smattering of Greek and Latin. In anticipation of this, the printers seem to have kept down production costs by using pre-bound volumes of 75 blank pages or so, to accommodate any variety of authorial verbosity. 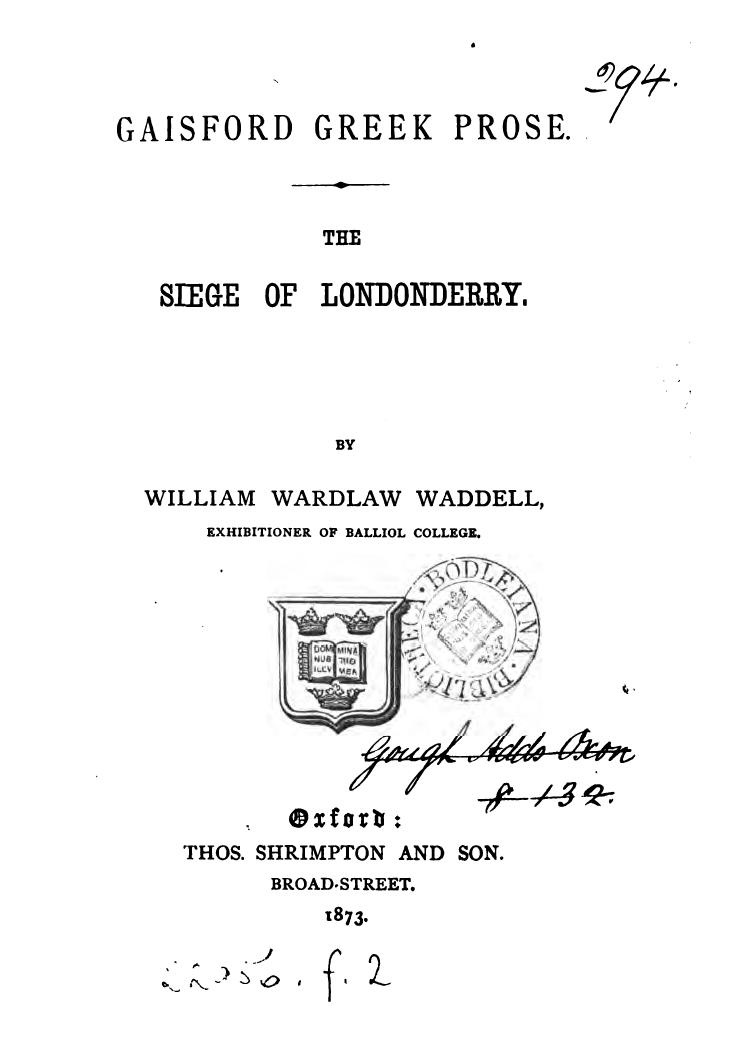