Great Great Uncle William was the immediately younger brother of James Waddell of whom, thanks to my Uncle Alexander (Sandy) Waddell, we know so much. But almost nothing appears to be known of William, save for his outstanding educational and academic achievements recounted below – and amplified in Appendix C of a fascinating biographyA of his brother Peter.

We don't know anything of his character or his personal life – no wife or family are recorded. He may quite possibly have suffered from ill health, as did his older brother, and indeed they both died comparatively young.

Born into the Manse as so many Erskines and Waddells were in that era, he was evidently precociously academic, entering the University of Glasgow at the tender age of 14, and studying there for eight consecutive sessions.

In most subjects he was steady rather than spectacular, but he excelled at the Classics (ie Latin and Greek). This is recorded in considerable detail on his record in the following link.

The Snell Exhibitions, from the University of Glasgow
to Balliol College, Oxford

of which the following is an abbreviated summary.

The Exhibitioner studied at the University of Glasgow for eight Sessions, namely, 1862-63 to 1869-70. Obtained the following Class and other Prizes!

1866-67, Senior Logic, fifth for general eminence; Greek Vacation Exercises (Provectiores of 1865-66), first for Translation into Greek Prose of a passage from Smith's History of Greece.

1867-68, a Coulter Prize of 2 guineas for the best Translation into The Dialogue of Tacitus de Oratoribus; Bracketed for the Lukestoncal Prize for an Examination in Ancient Greek and Roman History

Graduated M.A. 1871. Gained in 1872 the Ferguson (Classical) Scholarship of £80 for two years, open to students of all the Scottish Universities.

And two years later, in 1872, he also scooped the annual Ferguson Classical Scholarship a two-year bursary of £80 p.a.

And in the following year, 1873, he won the Gaisford Prize for Greek Prose for a submission entitled The Siege of Londonderry, in the style of Thucydides.

See below an image of his entry in the Balliol College Register, (though it incorrectly refers to the Gaisford Prize for Greek Verse rather than for Greek Prose), taking us in summary through his time at Balliol and his working career as Inspector of Schools in Edinburgh and Stirling, to his death at the unusually early age of 55.

After two years' study he evidently scored a First Class pass in Mods (the second-year exams for people on the Classics side), but then faltered at the finishing post with a Second Class in Lit Hum. To me this conveys a suggestion of compost, but in fact, as I had to Google, it stands for Literæ Humaniores, otherwise known as Classics, or in Oxford as Greats.

Meanwhile, in November 1871, he wroteA to the Prime Minister of the day, William Ewart Gladstone, a formidable classicist (who had achieved a Double First in Classics and Mathematics at Oxford), to draw his attention to an inconsistency in the latter's treatise Juventus Mundi, published two years earlier. The great man replied promptly and courteously, acknowledging his error with magnanimity.

In lighter vein, he compiled a medley of passages, from various sources, composed in a variety of languages, entitled Verses and Imitations.

Admirably, he maintained a close involvement with classical thought and, as indicated above, after 10 years of professional distractions, he went public with a new edition of (as I am informed) the toughest and most enigmatic of all the Platonic Dialogues:

Waddell's Edition of the Parmenides: The Parmenides of Plato, after the paging of the Clarke Manuscript, with Introductions, Facsimiles and Notes. William Wardlaw Waddell, M.A., Glasgow and Oxford. Glasgow: James Maclehose & Sons. 1894. 31s. 6d. net [This copy #61 of 150 printed] 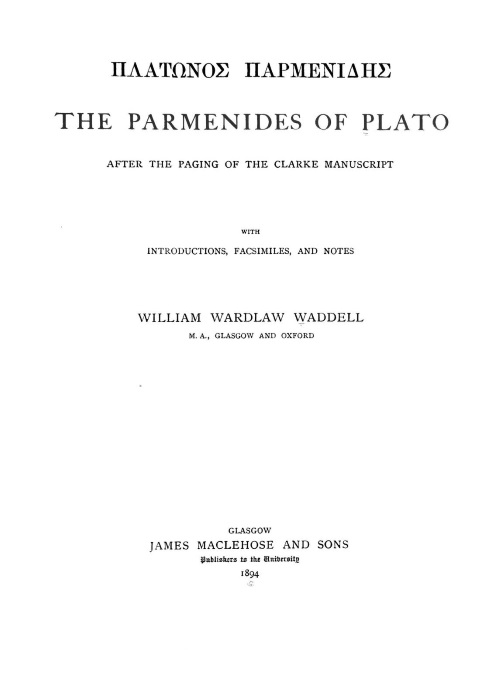 As always with such online facsimile versions, the maximal screen display can be achieved by using a judicious combination of the options Fullscreen / F11 / Hide Nav Bar / Zoom custom

THE PARMENIDES OF PLATO

AFTER "the paging of the Clarke Manuscript" follows the name of the Dialogue on the title-page, and the words suggest a singularly interesting story. Early in this century, Dr E D Clarke, happening to be in the Island of Cos, heard of a learned shoemaker as the possessor of some curious books. He found the man reading a manuscript Odyssey, and was told by him that the book and other volumes were copies of originals that were kept in the library of a monastery at Patmos.

Not long after, Dr Clarke found his way to Patmos, paid a visit to the Superior, and asked to see the library. It was found to be a small chamber, containing shelves filled with books of no particular interest, while on the floor was a heap of parchment volumes. The Superior – neither he nor any of his monks could read – when asked what they were, replied contemptuously, Χειρογραφα! [cheirographa = manuscripts, handwritings]. Dr Clarke examined the pile, and soon lighted upon a codex of singular beauty. It was labelled in a modern hand, Διαλογοι Σωκρατουζ [dialogoi Socratous = Socratic dialogues].

A negotiation, carried on through an Englishman in the Turkish service, followed. Two of the smaller volumes were at once removed. The rest, including the Plato, were to follow when occasion served. The monks were willing enough to part with them, but the Turkish Government, if it had an inkling of the transaction, would lay a heavy imposition on the monastery, and unluckily the inhabitants of Patmos were ready to act as spies for it. But the business was managed. A day or two afterwards, what professed to be a supply of bread reached Dr Clarke's vessel, with a request from the Superior that he would count the loaves and see that they were all right.

Right they were, five other volumes and the Plato. The subscriptio tells the story of its origin. "John the Scribe (calligraphus) wrote it for Arethas, the deacon of Patræ, for 13 byzants, in the month of November, in the year of the world 6404."

"The year of the world 6404" means AD 895. A byzant was worth, taking gold at its present value, Ils. 4d. [£0.57] As for Arethas, he was a great book- collector, and became Archbishop of Cæsarea sometime before 913. A catalogue compiled in the reign of Joannes Palæologus (1355), mentions the codex as then being in the Monastery of St John at Patmos. It is now in the Bodleian, enriched, it may be said, by the annotations of two of the greatest of English scholars – Richard Porson and Edward Gaisford.

This is the manuscript from which Mr Waddell has printed his text, giving it not only page for page, but line for line. There are also a few glosses added by later hands. A few necessary corrections have been made in accentuation and punctuation. The Dialogue occupies about forty pages, with thirty-four lines in each. The facsimile of one page exhibits a very beautiful handwriting.

Mr Waddell's Prolegomena contain, in addition to the description of this Clarke and other MSS, an exhaustive discussion on the authenticity of the Dialogue, which, unhesitatingly accepted by the critics of antiquity, has been seriously questioned in modern times, a definition of its place among the Platonic writings, and an analysis of its contents. This last will be found by the student to be of special value. There is nothing more puzzling in all that the philosopher has left us. It may be doubted whether, especially when Parmenides takes the discussion in hand, the writer himself had any definite answer to the riddles which he propounds. When we read of the One and the Many, of Being with its contradictory not Being and its opposite Becoming, we are inclined to say, "This way madness lies." But it is the way also to some of the most elevated regions of thought; as Mr Waddell says, "The Parmenides forms as it were a vestibule to those vast and mystic halls which are trodden by the metaphysician."

"Thus we may say" – this is Parmenides's summing-up of his argument – "that, as it appears, whether the One is or is not, so the One itself and the other things, in relation both to themselves and to each other, all of them and in all ways, are and are not, seem and do not seem."

"Very true," said his interlocutor, driven into a corner.

The Parmenides is not every one's reading, but for the student who has the courage to tackle it, Mr Waddell has provided a complete apparatus, critical and exegetical The book-lover will be pleased with the substantial paper, broad margins, and fine typography of a most sumptuous volume.

He must have been well pleased by the critical acclaim it received, which survives to this very day. Google that even now, and it's like being hit by a toppling wardrobe. In 1896 he sentA the now aged Gladstone a copy of his new edition and once again the great man replied with genuine appreciation of the gesture.

In 1897 St Andrews University, and in 1899 Glasgow University, offeredA him the honorary degree of Doctor of Laws (LL D), but he modestly declined both opportunities. However, he was sufficiently encouraged by the flood of enthusiasm for his Parmenides to offer himselfA as a candidate for the Chair of Greek at Glasgow University when the legendary Professor Gilbert Murray resigned in 1899. Despite widespread support (including that of the future Prime Minister Herbert Asquith who had himself been an outstanding classicist at Balliol at the same time as Waddell, and was awarded the Craven Scholarship in 1874), the decision did not go to Waddell.

Thereafter his extensive æsthetic knowledge and creative impulse focussed upon a work which was to be designated a First Historic Grammar of Art, and he was still hard at work on this when he suddenly and unexpectedly died.