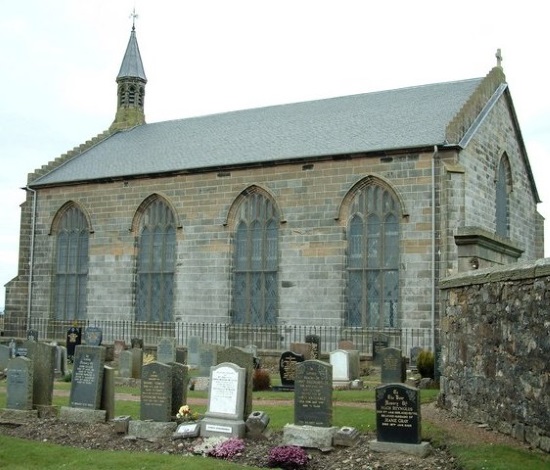 Born on 10 Apr 1771 in the Parish of Shotts, Lanarkshire,to parents whose personal details are still obscure, John Waddel was educated at the University of Glasgow, graduating MA in 1793. He then studied theology in Selkirk for a further four years, and was ordained as missionary to Nova Scotia in May 1797.

While in Truro he boarded with a Mr Alexander Barnhill until he moved into his own house when he married Nancy Ann Blanchard (1780–1818) on 2 Sep 1802.

Nancy died on 18 Aug 1818, leaving him with the care of seven young children.

In Oct 1828 John suffered a stroke which left him partly paralysed. As a result he needed a wheelchair to be able to continue his ministry. In the summer of 1836 he was injured when the wagon he was travelling in upset, and he subsequently retired from the ministry in Nov of that year. His last public address was at the funeral of a family who perished in a house fire in the spring of 1841.

Let's now look at his education and theological training in more detail. 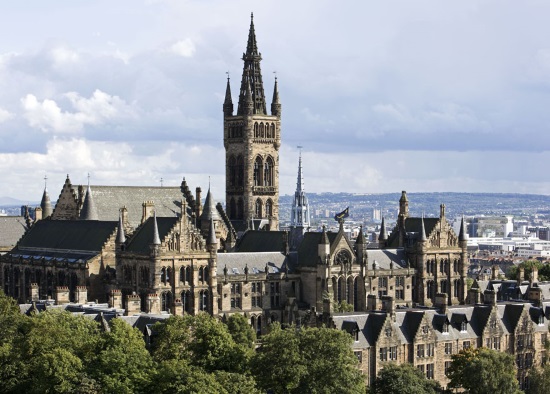 At the age of just 17, John Waddell became a student at the University of Glasgow. The process of registering for a course of study at a University in the UK is called matriculation, and personal details of each new student are put on file. At the University of Glasgow, fortunately, these details were collected as comprehensively as possible by William Innes Addison, and John Waddel's details (brief though they are) are to be found in the volume below. 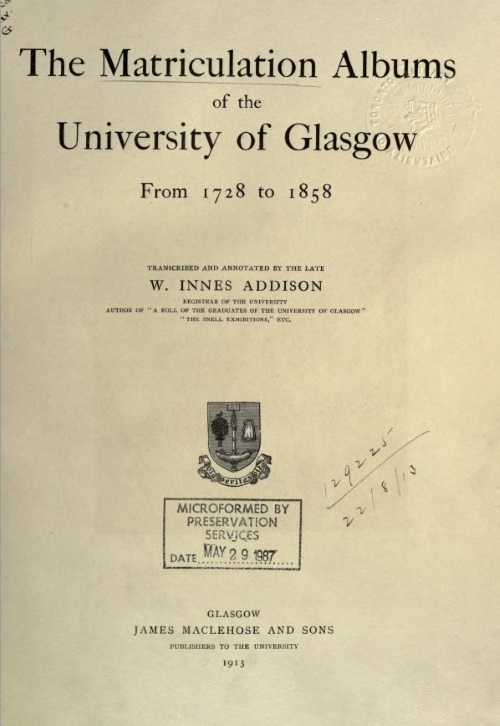 Filius natu maximus Matthei Agricolae
in parochia de Craigie in comitatu de Ayr.
Went to America as a Missionary of the Secession Church,
and became Minister of a Congregation in Shelburne, Nova
Scotia. Died in 1828.

The following tabulations might prove helpful when consulting this album:

So, as an imaginary example,

would be Latinised as

Our John Waddel was evidently the second son of the craftsman James Waddel, and was born in the parish of Shotts in the county of Lanarkshire.

And his colleague Matthew Dripps was the eldest son of the farmer Matthew Dripps, and was born in the parish of Craigie in the county of Ayrshire.

By all accounts John Waddell was a diligent and successful student, in literature and the sciences, and emerged some 5 years later with a good degree. (Unfortunately, it seems that Matthew Dripps dropped-out at some point, as there is no subsequent record of his graduation.) 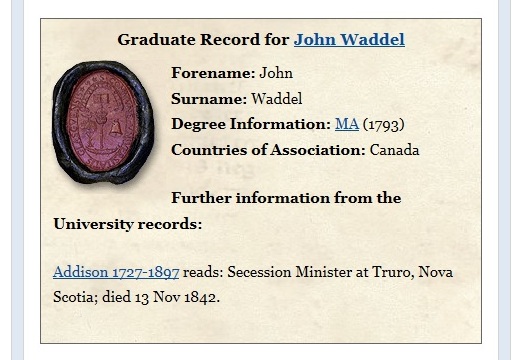 The information appended as to John Waddel's subsequent career is taken from p623 of another of the indefatigable W Innes Addison's other publications. 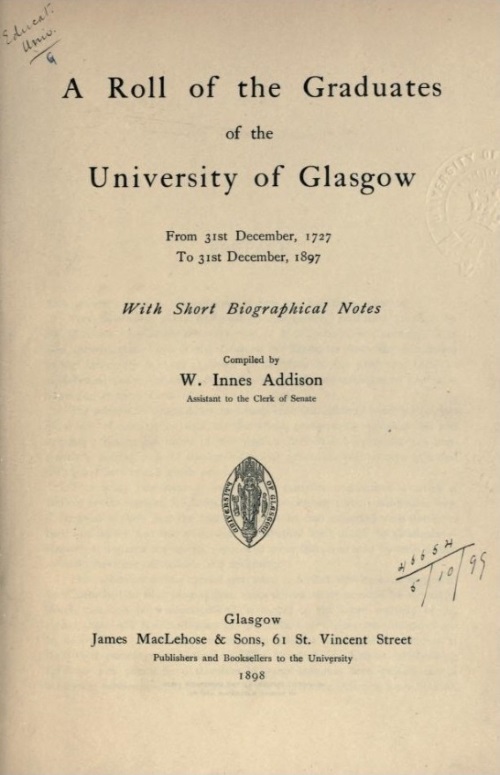 Another of W Innes Addison's compilations, Prize Lists of the University of Glasgow from Session 1777–1778 to Session 1832–1833, doesn't yet seem to exist in electronic facsimile format – but see below. It is implied in the volume that follows (by far the best account of his career), however, that he did in fact distinguish himself in this respect:

His literary and scientific education was prosecuted at Glasgow with credit and success. Several trophies of successful competition for academic and collegiate honours adorned his library, and furnished to his children incentives to honourable ambition; and on the 4th of April 1793, he obtained a diploma of Master of Arts from the Glasgow University.

After writing the above, I did in fact contact the University of Glasgow Archives Dept, via the University website, to enquire what personal record they might hold about him, and I am most grateful to them for the following fascinating account:

You can see John Waddel's graduation entry on our online roll of graduates at the following link: www.universitystory.gla.ac.uk/biography/?id=WH17262&type=P&o=&start=0&max=20&l=

Before 1858 formal registration (matriculation) at the University was not required unless you were an arts student who wished to vote in the Rectorial elections. Students normally paid their fees directly to their professor and often left no written record behind. We only have a record of John Waddel matriculating for one year in 1788 when he registered for the Latin class taught by Prof William Richardson (www.universitystory.gla.ac.uk/biography/?id=WH2350&type=P&o=&start=0&max=20&l=).

His matriculation record tells us that he was the second son of James, a craftsman/artisan in the parish of Shotts in the county of Lanark, and confirms that he was the secession minister at Truro, Nova Scotia, from 1798, and died on 13 November 1842, aged 72. You can view his record online at the following link under entry number 4858: archive.org/stream/matriculationalb00univuoft#page/154/mode/1up

I can confirm that he won a class prize for Greek in 1790/91, you can see his entry on page 47 at the following link: www.archive.org/stream/prizelistsofuniv00addiuoft#page/46/mode/2up

Unfortunately class lists do not start until 1794, so we are unable to tell you the classes that he took each year, however he would have studied the usual MA syllabus of Physics, Ethics, Logic, Greek and Latin during his time at the University.

This is all of the information that we hold on him, I hope that it is of interest.

So there is a digitised facsimile of W Innes Addison's Prize Lists of the University of Glasgow from Session 1777-1778 to Session 1832-1833 after all: 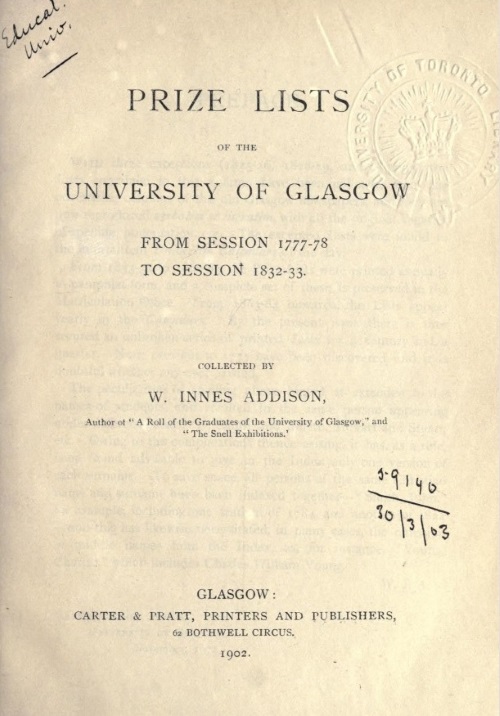 And John Waddel's prize was for honest effort rather than individual brilliance, but it is on the backs of us plodders that the elephants supporting the four corners of the earth plant their feet: 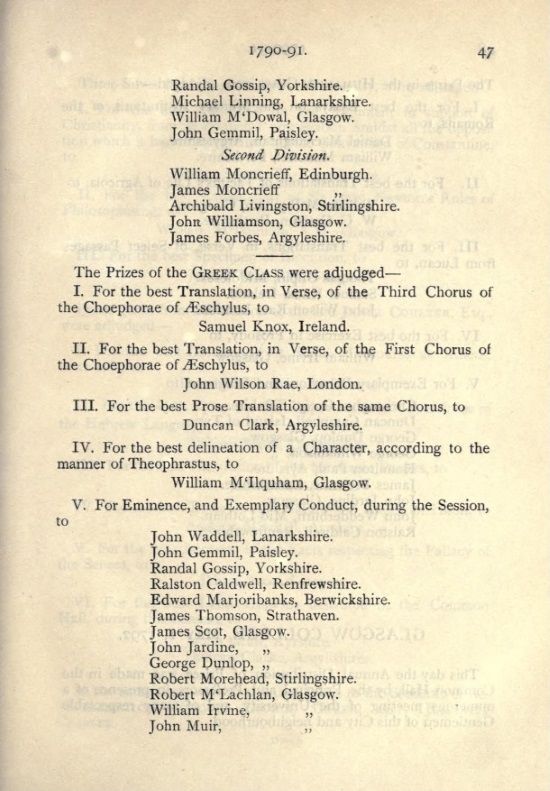 Note, however, that there is a nice new profile of him on the University website: 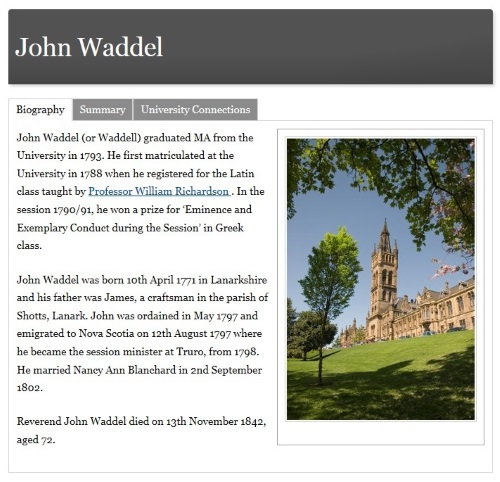 We now follow the newly-graduated John Waddell from Glasgow to Selkirk, some way to the southeast, where he spent a further four years of study under the supervision of the legendary Rev Dr (and now Professor) George Lawson1,  2 (13 Mar 1749 – 21 Feb 1820). 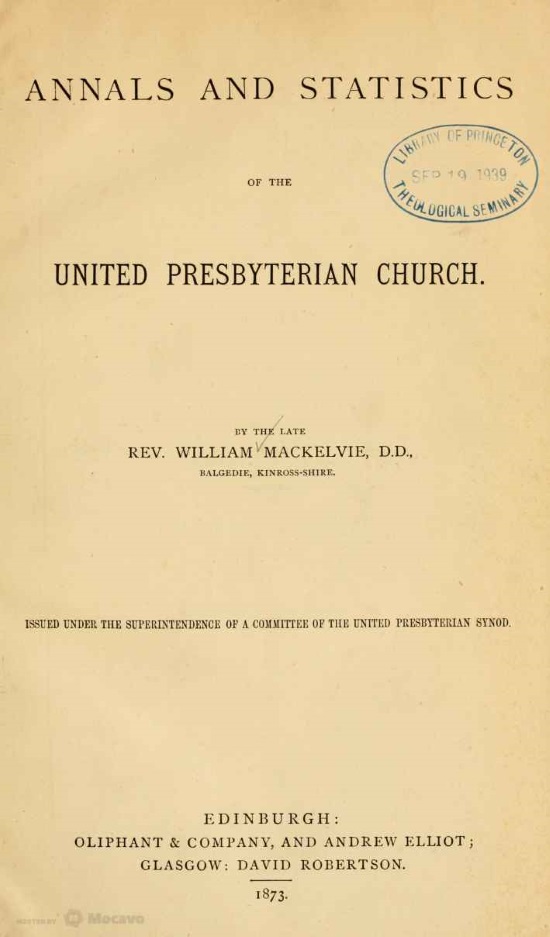 The records of the Rev Dr Lawson's annual intake of students between 1787 and 1819 (he died the following year) are fascinating in themselves, and contain some familiar names – and some surprises. Note that each year's intake would not – if they lasted the course – emerge as theological imagos until at least three or four years later.

Waddel, George from Longridge. Sent to America as one of the Synod's missionaries, and became minister of a congregation in Truro, Nova Scotia, and died there in 1839. [We need to do some serious research on him!]

Dripps, Matthew. Sent to America as one of the Synod's missionaries and became minister of a congregation in Shelburne, Nova Scotia. Died in 1828.

Wardlaw, Ralph1,  2, DD, from Glasgow (Greyfriars), grandson of [James] Fisher, and great grandson of [Ebenezer] Erskine1,  2, founders of the Secession [and all of them my own forebears]. Joined the Independents while on trials for license. Ordained minister of a congregation in Glasgow in 1803, and appointed theological tutor to the Independent seminary there. Author of numerous interesting and important theological works. Died 12 Dec 1853 in the 74th year of his life, and 51st of his ministry.

Now things started to move quickly. On 16 May 1797 he was licensed by the Glasgow Presbytery as a preacher, and the following month he was ordained as an evangelist destined for the Nova Scotia Mission (Robertson and Greig word their accounts rather ambiguously). Also destined for that Mission was good old Matthew Dripps, who had also studied theology under Dr Lawson and was likewise freshly ordained. They set off together on 12 Aug 1797 and arrived in New York on 18 Sep 1797. Their adventures had begun, and I can hand you over to Messrs Robertson and Gregg for the story of their ministries in Nova Scotia. 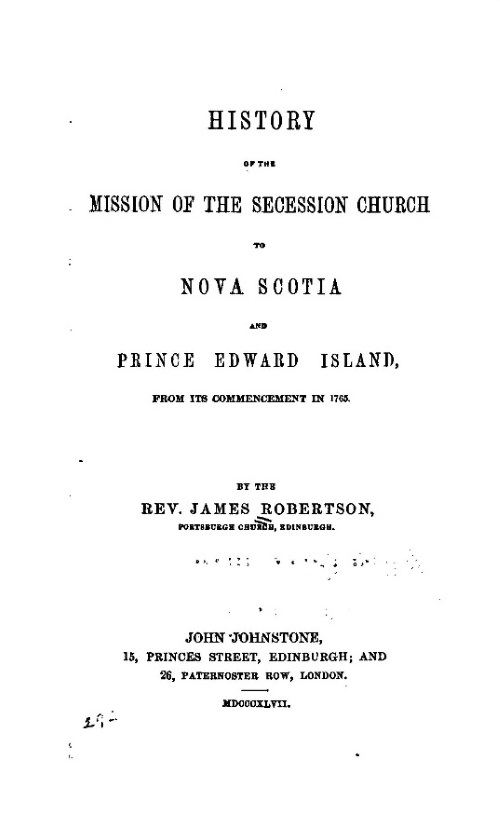 Although there are numerous earlier references to John Waddel, Robertson's narrative really gets into gear about him on pp 61–64: 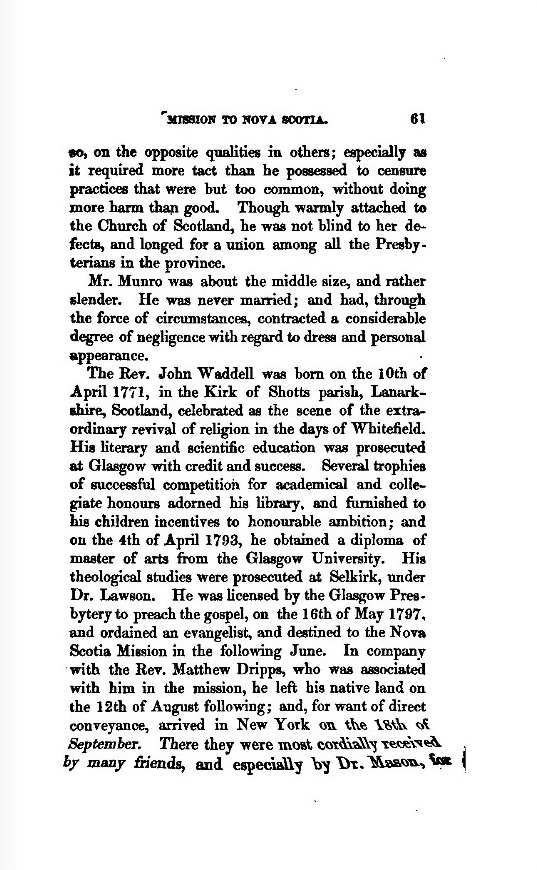 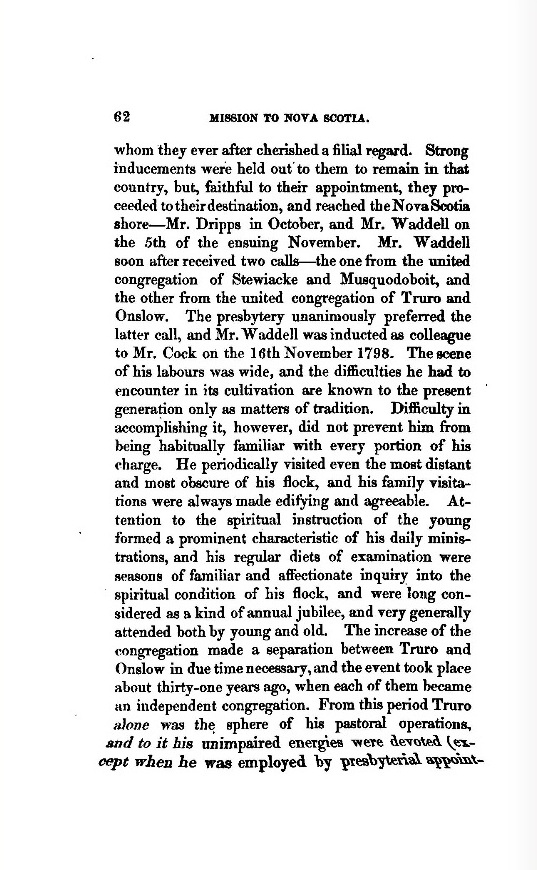 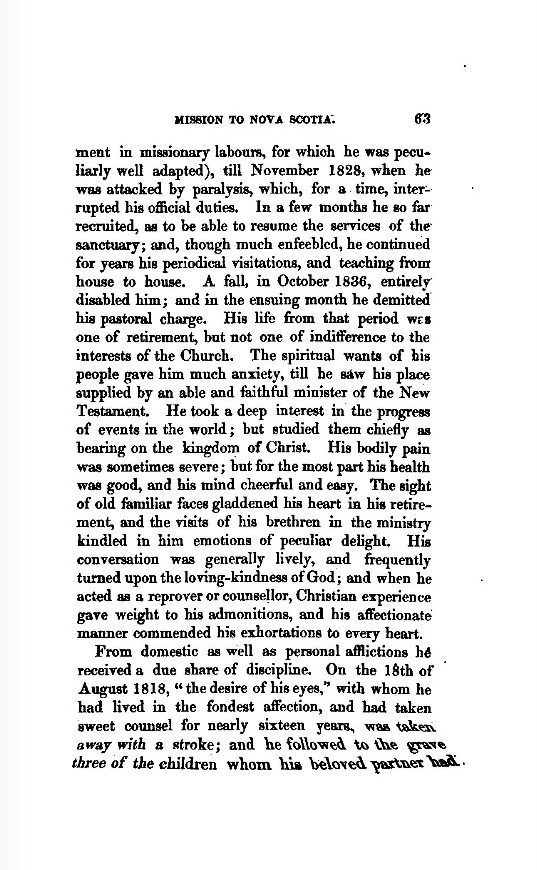 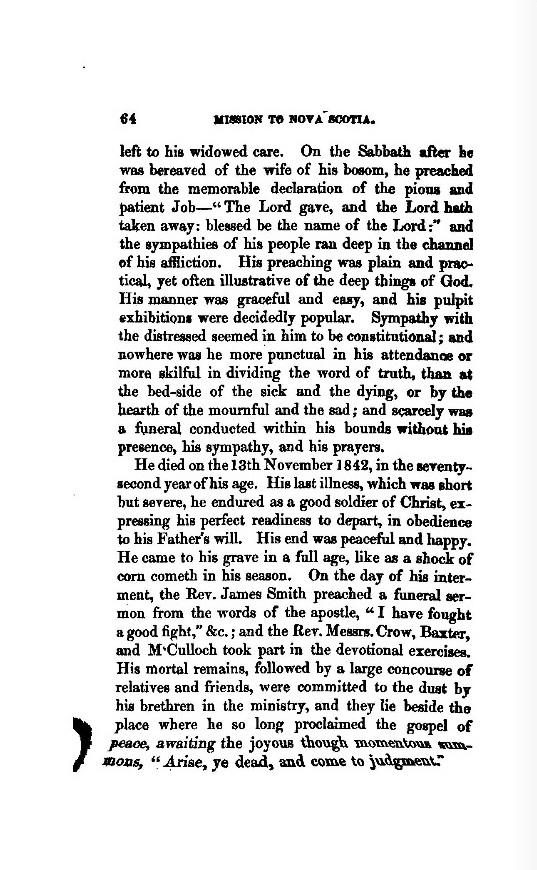 There are in fact a couple of lesser accounts that should be mentioned for the record. Gregg takes most – not all – of his material from Robertson, and his narrative is much briefer: 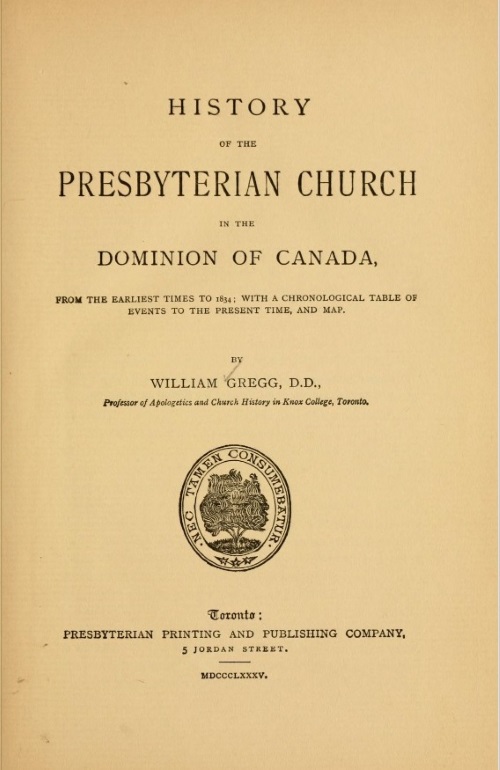 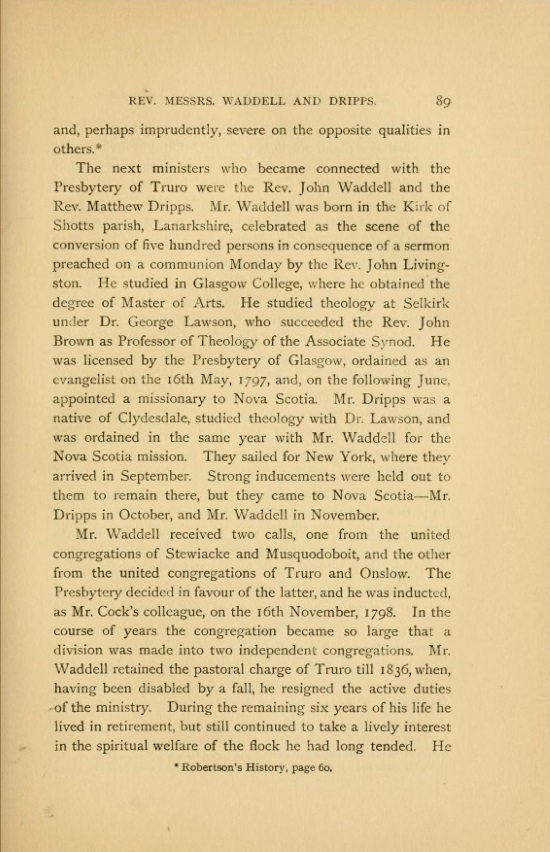 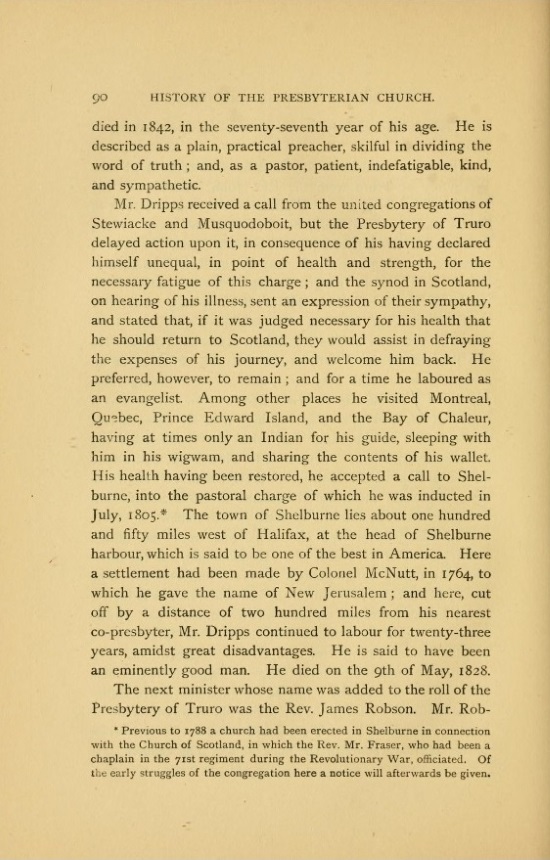 The third, by far the slightest, devotes but half a paragraph on p11 to the Reverends Waddel and Dripps, but the general reader may of course find many other good things instead therein. 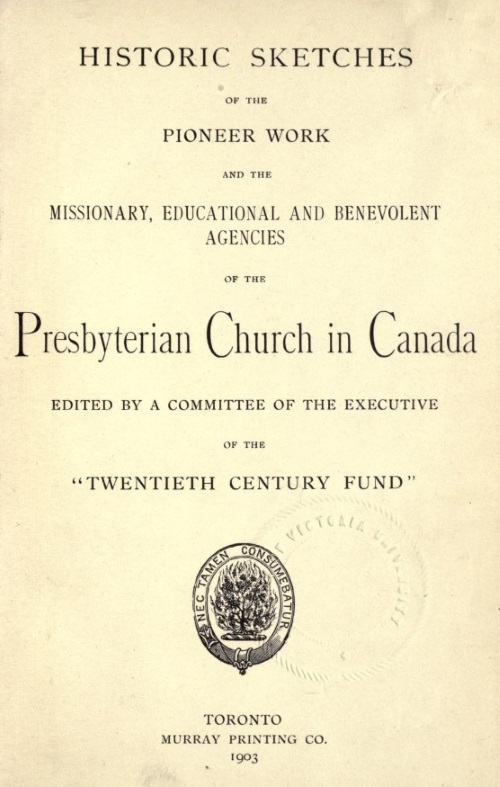 The Life and Times of George Lawson, Selkirk: Professor of Theology to the Associate Synod; With Glimpses of Scottish Character from 1720 to 1820;
by George Macfarlane (Classic Reprint) Paperback, 25 Jul 2012