In mid-1988 Ron was contacted by the BBC, to ask whether he would like to take part in a couple of programmes, presented by the renowned John Keay, about the history, culture and current predicament of Tibet. 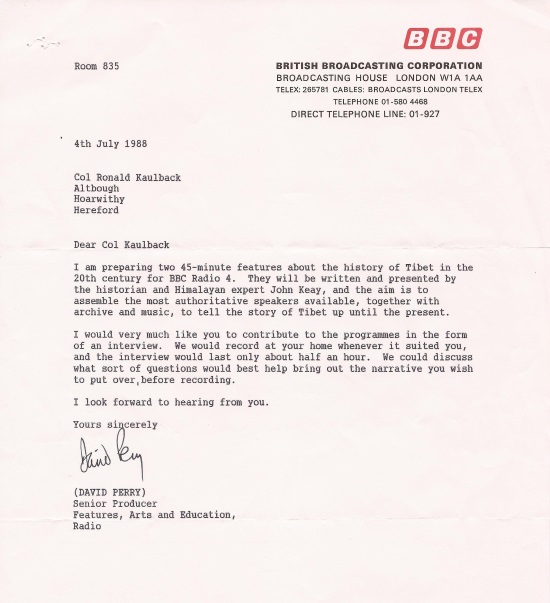 He was happy to agree, and the programs were duly broadcast early the following year.

Two documentaries about the political history of Tibet in the 20th century, written and presented by John Keay. 1: A Himalayan Fastness

British interest in Tibet at the beginning of this century was promoted by fears of Russian expansion in Central Asia. Tibet's obscure legal status made the country a hostage to fortune and eventually it was the Chinese Communists, suspicious of British and Indian intentions, who were poised to invade in 1950.

The last of two programmes. The Fall of Shangri-La

The Chinese Communist invasion of Tibet in 1950 was eclipsed by the brutality and iconoclasm of the Red Guards in the 1960s. Recent temple restorations and talks about talks between Beijing and the Dalai Lama constitute tentative steps towards restoring a ruined culture. But who can predict the outcome?

The BBC were delighted with his spell-binding recollections of that almost vanished civilisation. 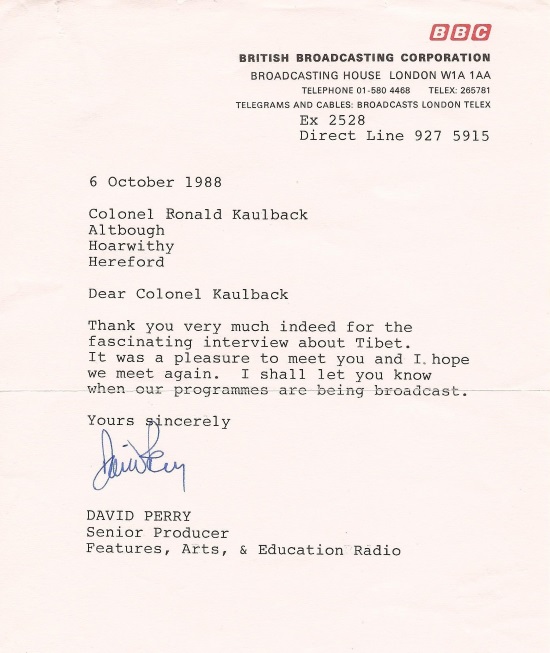 My wife Sonia and I didn't get much warning about the broadcasts, and our techno-savvy was even less then than it is now, and so she only managed to get an air-to-air cassette recording of her father's contribution. There is a tantalising hint that a BBC recording of the first programme (featuring Ron himself) is available, but I'm not sure how to go about it. Ivory, apes and peacocks are on offer to anybody who can come forward with it.