Family - Ronald Kaulback - A Physician at the Court of Siam
rikker.blogspot.co.uk/2008/01/book-review-physician-at-court-of-siam.html

Book review: A Physician at the Court of Siam 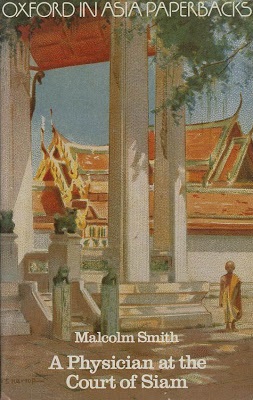 A few days ago I finished reading A Physician at the Court of Siam by Malcolm Smith (Oxford in Asia Paperbacks, 1985, 164 pages). First published in 1946, it's gone out of print, but I picked up a used copy on Amazon a while back. Took me almost two years to get around to reading it. I'm glad I finally made the time.

Malcolm Smith served as a court doctor for Queen Saowapa Pongsi (พระองค์เจ้าเสาวภาผ่องศรี, alternately spelled Saovabha Bhongsi), one of the four royal consorts of King Chulalongkorn, and mother to Kings Vajiravudh and Prajadhipok (Ramas VI and VII), and thus he has some extremely unique and rare insights into palace life during his time in the country's history. Smith arrived in Siam in 1905, and maintained a private practice outside of the palace in Bangkok while constantly being on call for the Queen. After Rama V passed away in 1910, Saowapa became Queen Mother, and she retained Dr. Smith as her physician in an unofficial capacity until her death in 1919.

If Smith's account concerned only his years in Siam, it would be of great value. But he combines his personal account with a great deal of research, particularly on the history of the Chakri Dynasty, in addition to the period of his own experiences. The main character in many ways is Queen Saowapa, as she is the member of the royal household whom Smith came to know best. He writes of her eccentricities in a fascinating level of detail and candor. The book reads very quickly, and fortunately lacking much of the ethnocentrism of so many earlier Western accounts. While one can tell that Smith views the typical Southeast Asian laid back attitude towards work and efficiency with a predictable Western distaste, he has enough objectivity (and perhaps enough distance, writing the book many years after leaving Siam), to avoid treading too far into "noble savage" territory like so many of the early Westerners in Siam who have left us their stories to read. And since he did not travel to Thailand as a missionary, his account makes nary a reference to religion at all. So we are spared the supplications (so typical in early Western accounts) for the expeditious redemption of the ignorance-shrouded, hell-bound souls of the heathen Siamese.

This book is perhaps unlike any other in its details of Siamese court life, excepting Anna Leonowens' An English Governess at the Court of Siam, the book (presented as fact but mixed with plenty of fiction) which formed the basis for Margaret Landon's 1942 book Anna and the King of Siam (even looser with the facts), which became further distorted in the 1946 film of the same name, and again into the cartoonish (if not unenjoyable) Broadway musical and film The King and I and finally culminating in the utterly preposterous 1999 endeavor Anna and the King. Smith seems to be the more neutral and thus reliable source. He even gets in a mild dig at Leonowens (keep in mind they were not contemporaries--she arrived in Thailand 40 years before he did). He writes of her unflattering portrayal of King Mongkut, "we need not believe all that she said; her books, particularly her second one [Romance of the Harem], show that she was gifted with a vivid imagination which at times took charge of her pen" (p. 42).

Much of Leonowens' negative portrayal of the monarch's private life stems from her extreme displeasure with polygamy. On this point Leonowens and Smith could not disagree more. In fact, Smith goes so far as to include a chapter in his book defending the practice in turn-of-the-twentieth-century Siam. He examines the hyperbolic estimates by what he terms "irresponsible" writers of the size of the Siamese kings' harems, and compares those estimates with the official chronicle to debunk them as uninformed. He also makes an attempt to defend the inbreeding, ahem, "consanguineous marriage" practiced in the Siamese royal family, as in many a royal family worldwide (his employer Queen Saowapa was the half-sister of her husband King Chulalongkorn--children of King Mongkut by different wives). Smith's take on these issues makes for a compelling alternate perspective, even if his defensiveness struck me as odd.

In all, I recommend Smith's book as a quick read that will easily sustain the interest of anyone with the slightest inclination for Thai history.