On Friday, the 26th of July 2002, three generations of the family of William and Evelyn James gathered at West Dean for the re-dedication of the memorial plaques of their ancestors, Frank Linsly James and Evelyn Elizabeth James. The plaques, which were rescued from the fire at West Dean Church in 1936, have now been reinstated in the South Chancel. 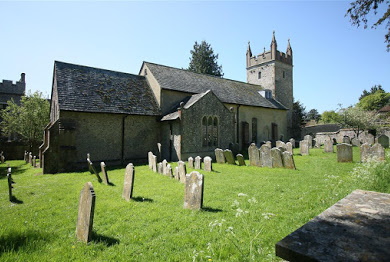 William and Evelyn James purchased West Dean Estate in 1891 and lived there until William's death in 1912. In its heyday, West Dean was the scene for many royal house parties and Evelyn James was renowned as one of the leading hostesses of Edwardian society. Not only was she among the most beautiful women of her day, but she possessed immense charm and a sparkling wit.

William and Evelyn James had five children, four girls, Millicent, Alexandra (Xandra), Silvia and Audrey, and a son, Edward. Edward was the youngest of their offspring and whilst he inherited West Dean Estate on the untimely death of his father, he did not take control of his inheritance until 1932 when he reached the age of 25. The year before he reached his majority, Edward James married the Viennese ballet dancer Otillie (Tilly) Losch, but sadly they divorced, without issue, in 1934.

Edward remained in contact with, but was never particularly close to, his four elder sisters. He did, however, enjoy the relationships he had established with his seven nieces and four nephews. One of the favourites amongst his nieces, was Evelyn Venetia Worthington (Venetia), the daughter of Xandra. It was Venetia who organised the re-dedication service in honour of her beloved Grandmother and her Great Uncle, who, on his 40th birthday, was killed by an elephant while on expedition in San Benito on the West Coast of Africa.

For many of the younger members of the James family, the re-dedication service marked their first visit to West Dean. They were entranced by the stories of their Great-Great Uncle Edward, and impressed by West Dean College, the result of Edward's vision of a place where creative spirit could be cherished and nourished in an environment which embraced both the old and the new.

The day began with a brief tour of West Dean House after which the family members enjoyed a picnic in the grounds. The re-dedication service, held in West Dean Church, began at 2:30 pm and was conducted by Revd. John Lamb. Following the service, the family returned to the main house where they were treated to tea and cake with the Trustees of the present owners of the Estate, the Edward James Foundation.

The Trustees of the Foundation were pleased to be able to meet with members of Edward's family and were delighted that three of the four sisters were represented. Those present were:

For those of us who live, work and are inspired by West Dean and especially, by the patronage of Edward James, we can only imagine how difficult it must be for the [descendants] of William and Evelyn James to have to view their ancestral home in the guise of a visitor. We do, however, want the family to know how grateful we are for the daring vision of their Uncle Edward which ensures that the James legacy of generosity, excellence and creativity lives on in all who continue to be touched and transformed by their West Dean experience.