BATTLE OVER AN IMPROBABLE HOUSE

By Sheila Hale, Special to the New York Times

The small 20th-century house in a remote spot on the West Sussex downs would seem to be anything but a preservationist's dream: the front is a blotchy metallic lavender, and the classical, disproportionately grandiose door case is painted pink and flanked by a pair of carved fiberglass palm trees.

But the house, filled with an unlikely juxtaposition of art and furniture from the 1930's and the Regency and Victorian periods, has become the subject of the most impassioned preservation campaign in Britain since the palatial Rothschild mansion Mentmore was sold in 1977.

Few members of the public had heard of Monkton House before it was offered for sale last fall by the trustees of the Edward James Foundation, which manages West Dean College, a college of crafts and conservation. The reaction astounded the trustees, who are selling Monkton to develop the college. The principal of the foundation, Peter Sarginson, says he is still "shellshocked."

Two preservation societies, Save Britain's Heritage and the Thirties Society, proclaimed that Monkton House and its contents were of such architectural and historic importance that they had to be bought for the nation by the Historic Buildings and Monuments Commission for England, known as English Heritage.

Monkton House was designed by Sir Edwin Lutyens. It was built in 1902-3 for Mr. and Mrs. Willie James as a retreat from their damp and forbidding Edwardian mansion, West Dean, situated on a 6,000-acre estate just north of Chichester. In the late 1930's, Lutyens's cozy farmhouse idiom was sensationally reinterpreted by the Jameses' only son, Edward. He filled the house with Surrealist art and artifacts, including a pair of sofas designed by his friend Salvador Dali in the shape of Mae West's lips, and redecorated the interior in a mixture of styles that both reflected and defied the taste of the period. 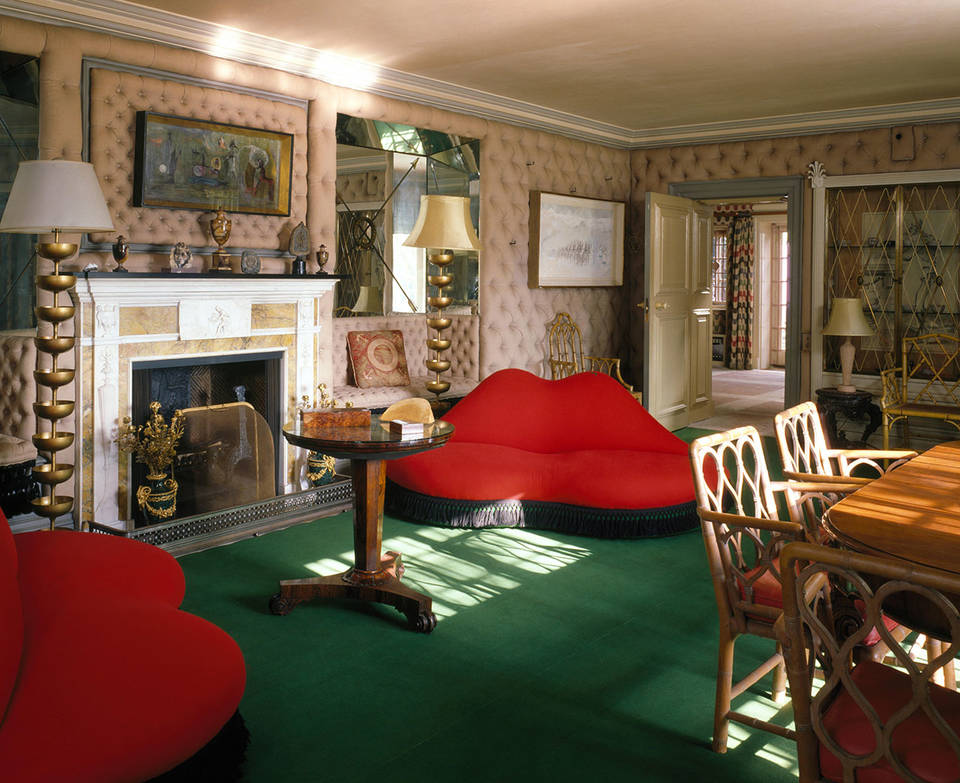 The dining room at Monkton House.

He put in pretty Regency fireplaces and antique furniture. He had the walls of the drawing room and dining room padded and buttoned in gray linen, like a Victorian sofa, and covered the floors in green billiard baize. He installed a new staircase with an elegant curve and had it covered with carpet woven with the footprint pattern of his two Irish wolfhounds.

In a corridor on the bedroom floor are a fine Paul Delvaux painting and a Dali chair with two skinny human arms stretched despairingly upward. James's bed is modeled on a sketch of Napoleon's hearse. His bathroom is lined in translucent alabaster through which shine electric images of the sun and crescent moon.

"It's the best interior of its period in this country to have survived," said the architectural historian Clive Aslet. "So many people did imaginative things in the 30's, but there is nothing left in England to compare to Monkton."

"Nor is it as bizarre as some people are suggesting," Mr. Aslet continued. "James resisted some of Dali's extreme ideas, such as drawing-room walls that heaved in and out like a dog's stomach. The Surrealism is there, but, as in a Cecil Beaton photograph, it's part of a very chic cocktail. The other ingredients are the neo-Regency style that was standard upper-class taste, and the neo-Victorian, which was more advanced."

Another architectural historian, Mark Girouard, described Monkton as "a little masterpiece - witty, creative, captivating and quite unlike anywhere else I have ever seen."

The chairman of English Heritage, Lord Montagu of Beaulieu, protested that the loss of Monkton House would be disastrous, and the trustees of the Edward James Foundation granted him eight months to raise the £850,000 purchase price (about $1.26 million at current exchange rates). With that option expiring on April 30, a private bid to buy the house for the full amount was made just before Easter. English Heritage has still not made a definite commitment to buy Monkton.

There is one last hope. Next Wednesday, Monkton will be visited by the trustees of the National Heritage Memorial Fund, a safety net for the heritage. They will make a decision the following day on whether to purchase the house.

Meanwhile, a study to determine if such a small and intimate house can be made suitable for public viewing is under way, and its importance are being furiously debated.

There are many people who agree with Philip Purser, who, in his biography "The Extraordinary Worlds of Edward James" (1977), compared Monkton to the home of "a mad potentate," saying that it was "furnished with extravagant jokes, treasures and 30's kitsch." Others share the reservations of Mr. Sarginson, the principal of the foundation, who says that because "Monkton is more like a private dream than a house, it would be wrong to have the public tramping all over it."

Edward James, who died in 1984 at the age of 77, was Britain's modernist Maecenas. The range of his patronage was extraordinary - from John Betjeman's first poems, which he published while still at Oxford, to the Los Angeles Watts Towers, which he helped to save in the 1960's.

He supported a season of Balanchine ballets in 1933, the best known today being "The Seven Deadly Sins." For it, he gave the idea as well as the money to Bertolt Brecht and Kurt Weill; it starred, as the two Annas, Lotte Lenya and James's beautiful wife, the dancer Tilly Losch. He commissioned music from Poulenc; he was painted by Magritte. He is perhaps best remembered as a patron and collector of Surrealist art.

In the 1960's, on the advice of his American tax lawyer, he turned over the West Dean property to the Edward James Foundation. In 1981 he auctioned the greatest of his Dalis through Christie's. Much of the remainder of his estate, including Monkton and its contents, were bequeathed on his death to the Edward James Foundation as an endowment for West Dean College. The foundation will dispose of some of the bequest at a sale to be held by Christie's at West Dean in June.

Whether the contents of Monkton, valued at around £750,000 (about $1.11 million), are in that sale remains to be seen. If English Heritage buys the house, it will have two to five years to raise the £750,000. A foundation trustee, the antiques dealer Christoper Gibbs, calculates that Monkton would also need an endowment of at least £1 million ($1.48 million).

[As of Jun 2020, it appears to be owned by Historic England]