I may be romanticising them but I see the Hoste family, of this era at least, as Jane Austen's people, of gentle birth, devout, unquestioning Anglicans, living lives of quiet usefulness in country towns or the Hampshire countryside, as clergymen, rural solicitors or local bankers perhaps, or impetuous younger sons seeking glory and serving their country bravely and well, as naval officers or military men.

But the cold, hard facts are that this is exactly what they were and did.

The brightest star in the family firmament was of course Captain William Hoste RN, beloved protégé of Admiral Horatio Nelson, but we will start with his father, a quintessential Norfolk clergyman. [Note as always the two sides of the reproductive coin, fecundity and early mortality. They were fruitful but they didn't multiply – and filled the earth all too soon, in a somewhat unlooked-for sort of way].

I must gratefully acknowledge two major sources of names and dates

And also a most useful exchange of posts re Hostes

Please note that in the following table, -4 Rev George Charles Hoste (b 1813) should precede his brother -4 Maj Gen Dixon Edward Hoste (b 1827), but I'm leaving it as it is for the moment (to the great relief of Eboracus).

I'm very grateful to my sister Anne-Marie for her great help in supplying numerous details that had slipped my failing memory!

Please note in this table that familiar names are used rather than given forenames, where appropriate. These may be diminutives, alternative names (ekenames or nicknames) or simply subsidiary forenames, and I've tried to indicate these various possibilities in italicised parentheses. In every case only the first distinguishing name is given.

For example, my stepmother Florence Blanche Jane was always known as Jane, certainly since her marriage to my father William.

I've recently (Feb 2014) been contacted by a present-day member of the family, Ned Hoste, about the early lineage of the Hostes, notably one Jacques Hoste who he recounts came from Flanders to London as an exile and cloth trader and seems to have done very well for himself.

One again, www.thepeerage.com proves its mettle – working back in time from the Rev Dixon Hoste of Godwich and Tittleshall, one reaches the rather appealing couple whose wedding portraits feature below. Theoderick in particular has a very modern cast of countenance. 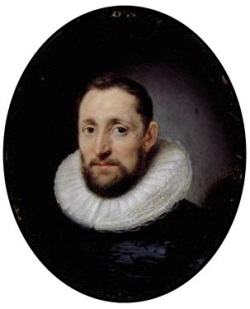 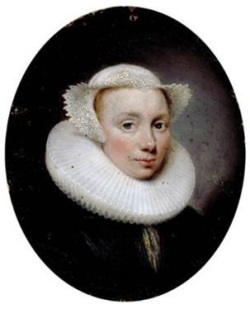 Further regress can then be made by simply googling 'Jacques Hoste, Flanders' and up come various family websites of which he was patriarch.

In those Tudor and Stuart times, the wool trade had made Norfolk (and Norwich in particular) immensely rich and its long-established trading links with the Low Countries§ became even stronger as a result (click here, or here if the link is broken) – the good Jacques was one of many Dutch and Flemish Netherlanders who immigrated across the North Sea, bringing with them their skills and traditions – even the nickname of the Norwich City football club arose from the Dutch hobby of canary-breeding!

It was also a time of great religious turmoil, of course, and Low Countries Protestants were suffering persecution from the Spanish authorities, just as the Huguenots were suffering in France after the Revocation of the Edict of Nantes – in both instances England was to gain immeasurably from the skills and work ethic of these Protestant refugees.

The Hoostsф/ Hostes quickly established themselves in England, and there is clearly a great deal of colourful stuff to learn about them – see for example the link to Jacques' grandson James, who bought a great estate, became a three-times member of Parliament for the Castle Rising constituency, and finally "shot himself through the head with a pistol in his closet" – but that will have to wait awhile.