The challenges posed by comical surnames for those who aspire to marry into them are dissected in H G Wells' short story Miss Winchelsea's Heart, in which the excessively-refined and over-aesthetic young woman of that name cannot bring herself to capture an otherwise most desirable young man by the name of Snooks, who is then ensnared by her less fussy 'best friend' Fanny.

A further dagger in her heart is to hear from Fanny that the happy couple are progressively reverse-engineering this commonplace surname to something much grander – in this case via Se'noks to Sevenoaks (from which it had originally evolved)!

Whether or not ones surname is unsatisfactory there can be other reasons for changing it – as described elsewhere in this website, Kaulbach to Kaulback, Howard to Howard-Sneyd, and Weidner to Coupland, for example. The most mind-bending instance was the late-Victorian Erskine schism.

History is silent as to the motive for the rebranding of Snook to Mortimer, and we can pass over it quickly. The most I yet know about the Rev Reginald Mortimer is that he was from 1896 until his death in 1904, rector of St Mary Major in Exeter, a most historic place of worship.

The Church of St Mary Major, formerly Exeter Minster, was a historic church and parish in the City of Exeter, Devon, dating from the 7th century. It pre-dated the first Exeter Cathedral by some five centuries, was rebuilt several times, but was finally demolished in 1971. It was situated to the immediate south-west of Exeter Cathedral, the site today being a grass lawn.

"Minster" [was] an honorific title given to particular churches in England, most notably York Minster in York, Westminster Abbey in London and Southwell Minster in Southwell. ... Eventually a minster came to refer more generally to "any large or important church, especially a collegiate or cathedral church"

A "cathedral" church seems to be the principal church in a diocese.

And a "collegiate" church seems to be a self-governing church that is not part of any diocese.

The history of St Mary Major is interesting but quite complicated

A minster or monastery, in what is now known as Cathedral Yard was established late in the 7th century, when the Saxons reached this part of the south-west. On the site chosen there had once been a Roman Bath House dating from AD 60-65, which was replaced by a basilica.

The Crediton born Winfrid, was educated in the minster around about AD 680, travelled to Germany to spread the gospel, becoming the patron saint of the Germans, St Bonifice. In 930 AD (circa) the Anglo-Saxon King Athelstan refounded the minster. In 1003, the Viking King Sweyn Forkbeard attacked Exeter and burnt down the building; the minster was rebuilt in 1018 by King Canute.

The last Saxon Bishop, Leofric, was having problems with security at his seat in Crediton because of Danish raiding parties. In 1050, Edward the Confessor granted the Bishop, permission to move the episcopal seat to Exeter, and thus turned the minster into a cathedral. Then, the world turned upside down for a fledgling England, when in 1066 William Conqueror invaded the kingdom. Soon after, in 1068, Exeter was taken and Leofric was allowed to continue in his post. In 1114, Bishop Warelwast, nephew of the Conqueror, started building a new, vast Cathedral church to the south east.

In the years after the new Norman Cathedral was completed (circa 1220), the old minster became the church of St Mary Major.

When the 16 year old Catherine of Aragon was en route from Spain to marry Arthur, the eldest son of Henry VII in 1501, she stayed at the Deanery, close to St Mary Major. The weather was very windy and the vane on the top of the church '...did so whistle that the princess could not sleep' – a workman was ordered to climb the tower and pull it down. The tower was lowered in 1581, and again in 1768.

In 1864, consideration was being made to demolish and rebuild St Mary Major. The parish had a population of 3,700, and in a time when church attendance was much higher, it was thought that a new church of 600 sittings was required. Some in the city were aware of the loss of ancient architecture and in May 1865 the Diocesan Architectural Committee discussed the demolition. A member, Mr Drake remarked:

Mr Drake called attention to the paragraph in the report in respect to the tower of St Mary Major's Church. They would all much regret the destruction of the tower, and he suggested whether the architect entrusted with the rebuilding can not so arrange his plans as to retain the final specimen of Norman architecture, and rebuild the church in unison with it. Year by year they were losing traces of the old city architecture.

Despite protestations, the old church was demolished in the Autumn of 1865 and on the 5 March 1866 the foundation stone for the new church was laid by Mayor Robert Thomas Head. The new church, was designed by Edward Ashworth and was built on the old foundations, at a cost of £7,000. Much of the stonework from the old church was recycled with quoins and dressings of Bath and Chudleigh stone; the columns of the aisle arcade were from Chudleigh black and Ogwell red marble. It had a capacity of 500. The spire was 151 ft high and contained a single bell cast by T Bilbie in 1794. It was consecrated in December 1867.

In the 20th century[...] the area was largely unscathed during the 1942 bombing.

Towards the end of its ecclesiastical life, attendances fell. In the late 1960s, Methodists from the Mint which was being rebuilt, temporarily used the church for their services. It was decided that St Mary Major was no longer viable and in 1971 it was demolished, [...], the site was closed and grassed over, leaving a lovely, open area leading to the west front of the Cathedral. 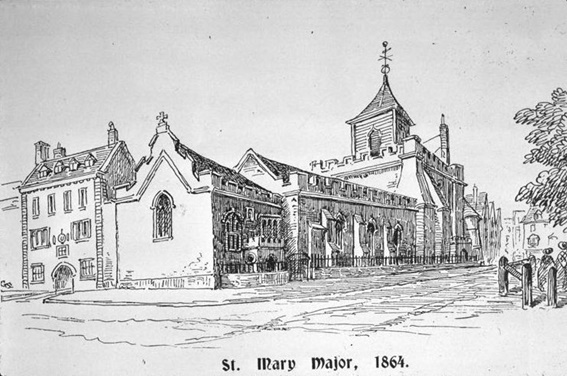 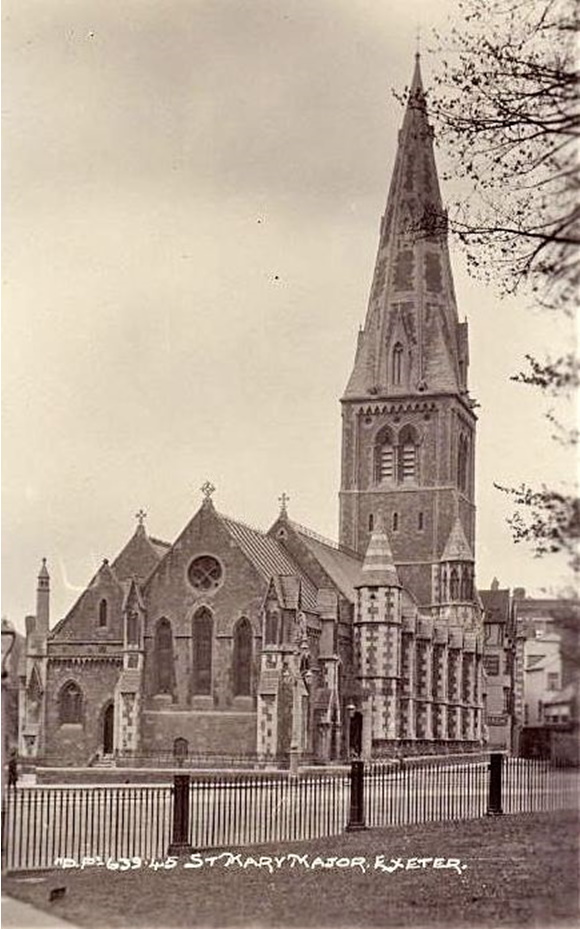 But what of Rev Reginald Mortimer, I hear you ask?

This is perhaps the finest group of late Georgian houses in Exeter, and were built by Matthew Nosworthy. The crescent is built above the quay and has a fine view over the river, canal basin and towards Haldon Hill. The foundation stone was laid by Louisa Colleton on 3rd September 1802. Each end of the crescent is a three storey house, with the main block consisting of four storey houses, some with decorative iron verandas.

The French and Prussian Vice-Consuls were both based in the Crescent in 1852. The crescent has also appeared on television, in the Onedin Line, and has also been drawn and painted many times, including by the artist, J M W Turner.