Patterson was a young Scottish missionary who worked in Tibet during the late 1940's and early 1950's, and subsequently exposed the harsh and oppressive conditions inflicted by the Chinese occupation.

His obituary in The Times (Thu 31 Jan 2013, p 51) provides a stirring story of how he overcame poverty, illness and educational disadvantage to become a medically-trained missionary with an inner vocation towards Tibet. He arrived in 1949, aided by the China Inland Mission (co-founded by Dixon Edward Hoste1,  2), shortly before the Chinese invasion.

Having taken refuge for 6 months with the veteran insurgent Topgyay Pandatshang, with whom he had struck up an incongruous comradeship, Patterson decided to cross Tibet alone to reach India and proclaim to the outside world what was happening to Tibet under the grip of the Communist Chinese. And so he did, crossing the great gorge of the Salween river and meeting the renowned Himalayan botanist-explorer Frank Kingdon Ward1,  2 en route.

Subsequent return to Tibet was impossible until 1982, but his later friendship with the Dalai Lama (who had to flee Tibet in 1959 as described below), was lifelong. He turned to journalism and never ceased to campaign for the Tibetan cause through the media and his many publications. 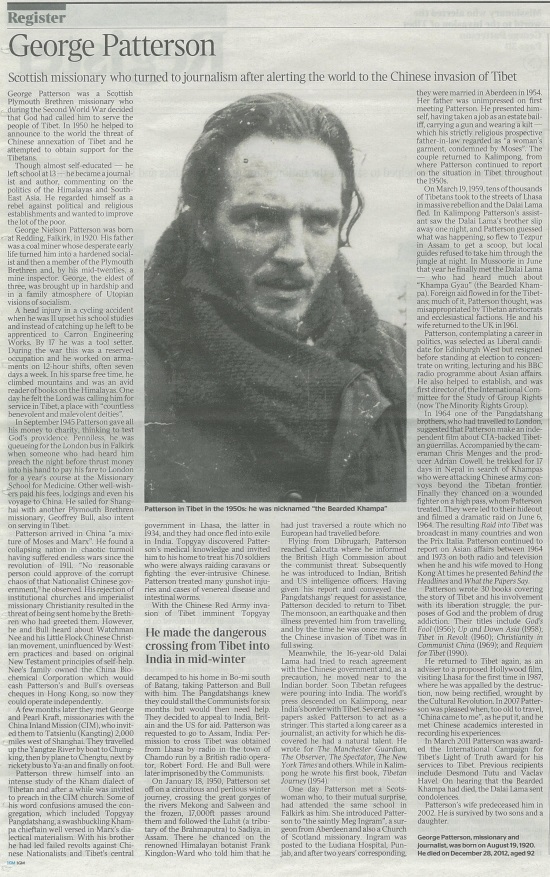