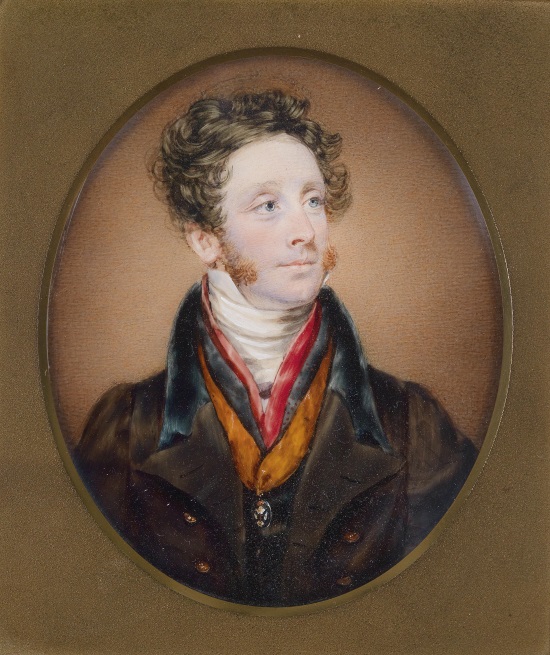 The attributed date certainly fits with the fashionably dashing attire of this engaging young fellow, and with the biodates of John Francis Miller Erskine (28 Dec 1795 – 19 Jun 1866), who would have been about 30, and already the Earl of Mar & Earl of Kellie.

However, his coppery locks and whiskers are quite different in colour from those in the other portrait we have of a cadaverous and gloomy-looking J F M Erskine, the whole demeanour is different, and I find it hard to believe that this portrait actually is of him.

The colouring would in fact fit very much better with the portrait we have of Walter Coningsby Erskine (12 Jul 1810 – 17 Jan 1872), if the date were attributed just a decade or so later, and he certainly did eventually become Earl of Mar & Earl of Kellie. There are two other features in common that favour this interpretation – the cut and buttoning of the jacket, and the obtruding locket (maybe not the identically same one, of course).

Some years ago (2010) there was a somewhat similar uncertainty about the subject's identity in another of Macleay's portraits, so we're in familiar territory. For the time being, I'll link this one to John Francis Miller Erskine, but would welcome any more informed opinion.