Harry Brearley, though a byword in the Waddell family since the 1920's, or maybe even earlier, has only recently achieved public awareness of his discovery of stainless steel back in 1913, as the recent centenary of this breakthrough brought his name to (modest) fame, at least among the technologically literate sector of society. 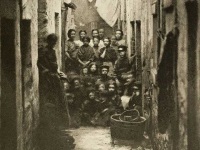 The particular fascination of his life story arises firstly in the desperate poverty into which he was born in a backstreet slum of industrial Sheffield in the late Victorian era, sharing a one-room dwelling with four brothers and four sisters. Plus of course his parents, thoroughly decent and admirable people, both of whom worked – his father (whom Harry described as an expert steel smelter and an expert ale-supper) in a local steel mill and his mother as a laundress.

After the most rudimentary education, he started work at 11, running errands to and from the mill (Thomas Firth and Sons) at which his father worked, and then briefly as a labourer there. But his guardian angel then intervened, and he was transferred to the post of general assistant in the company's chemical laboratory. By the age of twenty, he was apprenticed as a laboratory assistant. Thus began his astonishing rise, based on hard work and self-education, to become one of the foremost experts of that era on the chemistry and metallurgy of steel, and the inventor, or at least co-inventor, of stainless steel.

Now, this isn't a biography of Brearley, or a history of stainless steel (though I'm appending some possibly useful reference links). I just want to set the stage for the impact of Brearley's education and career upon the career of my grandfather Robert Waddell (to be pursued in his own, separate, profile).

As a child I was sent to Holy Trinity Church School... [I was] not literally compelled into school...

... Later I went to the Board School in Woodside Lane...

... Of course I paid the usual penalty for being regularly late but my conscience, if I had a conscience, did not upbraid me. I feel now that if I had been disciplined by a careless hand into a nice obedient schoolboy I should have been damaged; and I have grown to be a firm believer in St. Paul's injunction – "Quench not the Spirit". So the first thing I have to thank Sheffield for is that I was not bludgeoned into being a scholar: there are other ways.

I left school when I was barely eleven...

Brearley was certainly consistent in his disdain for conventional education, and in adult life got into trouble with the local School Board when it was found that his son Leo had not been sent to school. No doubt Harry thought that he would be able to make a better job of his education. In his autobiography "Knotted String" he admitted that he "went over the top" about the matter, but noted that Leo had had to appear before an antipodean magistrate (having emigrated to Australia in the 1920s) for neglecting his own son's schooling!

(My grandfather Robert, always an admirer of Brearley's unconventional take on the world, was influenced by this attitude when deciding on a school for my father Walter, As recounted elsewhere he chose Rossall, an educational catastrophe for Walter, in preference to Stowe.)

James Taylor, the metallurgical chemist in charge of the Firth laboratory, had come from just such a deprived background as Brearley's. He'd previously been the manager of a copper mine in Serbia, but moved to Firths in 1884 to be their head analyst. He remained for nine years, but in 1893 he relocated to Australia to become the Government Analyst in New South Wales.

At the ceremony in 1939 at which Brearley was presented with the Freedom of Sheffield, he recollected that

James Taylor was a man who had been as poor and forlorn a boy as I was ... Under his care and encouragement I was born again. He taught me how to get knowledge from books; he taught me how to think for myself; he taught me how to do difficult things with my hands, and in time, from his example and others I came to speak book English, and get a glimpse of the Arts and Graces of Life. I should say that my native speech is the Dialect, and I still speak it when I get a chance; but until I met James Taylor I spoke nothing else. 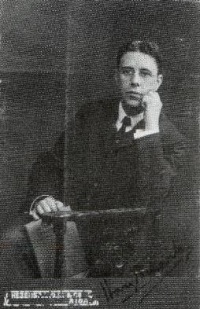 Brearley as a young man
(note the autograph)

For several years, in addition to his daytime laboratory work, he studied at home and later at evening classes, to specialize in steel production techniques and associated chemical analysis methods.

In 1901, now aged 30, having long since completed his five-year apprenticeship, Brearley left Firths to start a new laboratory at Kayser, Ellison and Co, and to co-author the first of his technical texts (with Fred Ibbotson), The Analysis of Steel-works Materials (Longmans, Green, 1902) - you can still see it on Amazon.

In 1903 he returned to Firths, after its merger with John Brown & Co, becoming chief chemist and then works manager at Firth's Salamander steelworks in Riga (at that time part of Russia, now capital of Latvia of course).

And in 1907, when Firths and John Brown & Co decided to jointly finance a common research capability (Brown-Firth Research Laboratories), they asked Brearley to direct the new facility.

By 1912, Europe was already a tinderbox awaiting the inevitable spark, and armament research became a top priority. Brearley was investigating new varieties of steel to reduce erosion in gun barrels, and discovered that judicious admixture of 12% chromium dramatically reduced susceptibility to corrosion (whether by acids or oxygen). He'd discovered stainless steel (whether it was useful for gun-barrels as well as cutlery I really don't know), but in the long run it resulted in ferocious arguments with Firths about royalties1, which led in 1915 to him leaving Firths and joining a smaller but nimbler rival – Brown Bayleys – as works manager, and for the next decade he would deal with practical problems of production rather than research.

But there, Gentle Reader, as Asimov loved to say, we will put Harry Brearley on the back burner for a little while.

For an overview see
en.wikipedia.org/wiki/Harry_Brearley

For his background and career up to about 1920, ee
www.gracesguide.co.uk/Harry_Brearley

For a terse, unadorned summary of his career up to 1925, see
www.tilthammer.com/bio/brear.html

Far and away the best account of his origins, character, career and conflicts with Firth's corporate arrogance – see
www.portlandworks.co.uk/history/the-tale-of-portland-works-and-the-invention-of-stainless-steel

For a very good account of the chemistry and metallurgical background to the emergence of stainless steel, in which Brearley might just be regarded as primus inter pares, see
www.bssa.org.uk/about_stainless_steel.php?id=31 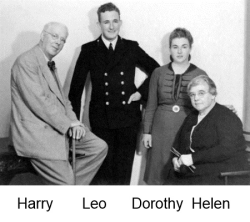 And for a deeply satisfying narrative of Brearley the man, husband, father, civic hero and public benefactor, please see
www.totleyhistorygroup.org.uk/people-of-interest/harry-brearley/

Over the years, I possessed two copies of Knotted String (1941), the first passed on to me when my grandmother moved into residential care in the mid 1960's, and the second purchased at vast expense via Amazon (curiously enough, it was sourced from Australia). Both copies I gave to other members of the family who'd indicated great interest in reading it, but, alas, both disappeared. However, admittedly not then particularly interested in Brearley, I did think it was a dry read and didn't rend my outer garments when each copy vanished. It might possibly now seem more of a page-turner, and if you'd like to see it, it's marketed by Amazon in a joint edition with Steel Makers (1933).
www.amazon.co.uk/gp/search?index=books&linkCode=qs&keywords=0901716650

But there had also been another, earlier, less formal autobiographical essay. Brearley's Autobiographical Notes were written in 1929, when he was 58 years old and convalescing in Torquay. The papers were bound and sent to Leo. In 1988, at the time of the 75th anniversary of Brearley's discovery of stainless steel, British Steel Stainless planned a commemoration and began collecting memorabilia concerning Brearley and his work. Brearley's notes were found in Australia in the possession of his grandson, Basil. The notes were published as Harry Brearley – Stainless Pioneer by British Steel Stainless and the Kelham Island Industrial Museum in time for the 75th anniversary celebration.
(Click here if unobtainable)

And not surprisingly, Brearley had merited an entire Chapter Five to himself (partly based on the Autobiographical Notes) in a recent survey of the stainless steel story:
The History of Stainless Steel, Harold M Cobb, ASM International, 2010
(click here if unobtainable)