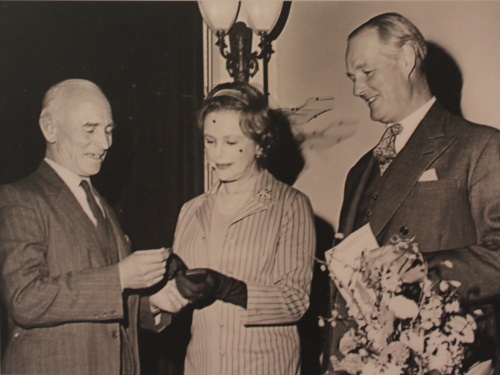 Presenting the late Murdo Mackenzie, from Forres, with a special Gold Medal award from the Irish Royal Horticultural Society in 1966, for a lifetime of work on the garden island of Garinish, are the Earl and Countess of Rosse.

THE family of a former Forres man who was honoured by both the Irish Government and UK horticultural organisations for his work on a garden island in Bantry Bay, County Cork, say they are delighted to have presented some of the special awards that he received to the Irish government for a permanent display.

Award-winning gardener Murdo Mackenzie, who was originally from Forres and the son of a gardener, died in 1983 after a lifetime of work spent at Ilnacullin Gardens on Garinish Island, which is described as an "enchanted garden island", as it is located in a sheltered inlet. Mr Mackenzie's niece, Dorothy Scott from Forres, who has visited the island in the past, travelled to Ireland earlier this year, where she handed over her uncle's awards to be displayed permanently on the island where he worked and spent many years. "A lot of people remembered my uncle for the work that he did," she said. "A lot of people from Forres have also visited the island."

Mr Mackenzie was the son of the late Murdo Mackenzie, a gardener from Forres House Lodge, who taught his son his trade. Murdo Jnr, who saw active service in World War I in the Seaforth Highlanders, became a forester at Darnaway Estate, before being invited to Eire in 1928 to tend to the island which had been neglected during the war years.

The 37-acre island benefits from spectacular sea and mountain scenery and a balmy climate due to the equatorial waters of the Gulf Stream. It was known as the "island of holly" as it was little more than a barren rock covered with furze and heather and surmounted by a Martello tower, when it was purchased in 1910 from the War Office by Belfast businessman and Scottish MP, John Annan Bryce, who died in 1924. Bryce commissioned the English architect and horticulturalist Harold Peto to design a garden on the island and between 1911 to 1914 more than 100 men were engaged in moving soil, blasting rocks, planting trees, laying paths, as well as building a walled garden, a tall clock tower and a wonderful Italianate garden complete with casita, pool and pavilion.

Strong winds damaged much of the early planting and Mr Mackenzie was put in charge of the garden in 1928, successfully establishing shelter belts, of mostly Scots and Monterey pine, before proceeding to build up the splendid collection of rare and tender plants for which the island is now famous.

After ownership of the island passed from the Bryce family to the Office of Public Works in 1953, Mr Mackenzie remained in charge, retiring in 1971. His remarkable work at Ilnacullin is credited with being one of the great success stories of Irish horticulture. Visitors still go to the island, brought on boats to sample the delights of Ilnacullin and passing basking seals on their journey, before arriving at the north side of the island and visiting the Italian gardens.

Mrs Scott said that her uncle was very proud of his work and the family were delighted that his awards and medals would be on permanent display on the island in tribute to what he achieved. In 1966, Murdo Mackenzie was awarded the Horticultural Society of Ireland's gold medal, which was followed up in February the following year with the honour of being made an "associate of Honour of the Royal Horticultural Society of the UK" and being presented with a Gold Medal. During the 1980s, he was recognised by the Irish Tourist Board (Bord Failthe) who presented him with an engraved crystal rose bowl and citation in recognition of his 43 years' service to the Island Garden. In 1982, he received the UDT Endeavour Award for tourism which took the form of a beautiful sculpture of silver swallows. He received one of his awards from the Countess of Rosshire and another from the Irish president and his wife.

Mr Mackenzie, who was unmarried, died at the age of 87 in January, 1983. He had visited Forres just two months before.