Periodic Table of the elements

This tabulation of the elements in order of atomic number was fascinating to me at that time (especially as I'd never heard of most of them), but of course it gave no explanation of why the electrons in the atoms of each element, one or two shown as an example, were arranged in the separate shells shown diagrammatically. Why two in one shell, eight in another?

Secondary school was no help. The science teaching was still stuck in a 1930's time-warp, at least in the sets to which I'd been consigned, and the textbooks were if anything even more ancient. Click here for an example of the 'short-form' Periodic Table format (from a highly reputable UK textbook, republished in 1960) that was supposed to help us understand the intricacies of inorganic chemistry. Apart from the extra elements it was no further advanced than Mendeleev's best effort of over half a century earlier.

At undergraduate level there was no effort made to base the inorganic chemistry lectures on any, more up-to-date, 'mid-form' Periodic Table1,  2 – in fact it was scarcely mentioned. In a way, I was fortunate to have (from somewhere) a copy of the excellent 'mid-form' wall-chart published by Mullard (now just another headstone in the graveyard of British industry), which displayed the electron configurations of each and every element (and listed their isotope abundances and forms of radioactive decay). But there was a conspiracy of silence about the genesis of the transition elements (and of course the lanthanides and actinides which weren't an issue anyway as we didn't study them). Why and in what sense were they transitional in comparison with the holy trinity of Fe Co Ni in the 'short-form' tables?

When I was first given access to Excel by my employer in 2000/1 as they dumped responsibility for several score flaky in-house Excel VBA engineering applications into my already over-extended lap, I immediately noticed the potential for a truly representative – and interactive – computerised Periodic Table, to replace the Mullard wall-chart that had graced our sitting-room wall since the mid-1960's, and was by that time slowly disintegrating.

But my private world was about to fall apart comprehensively in a variety of ways, and only relatively recently has this intention resurfaced. But by now of course there are dozens of commercial competitors, and couldn't I just buy a suitable version from someone (especially as I'm relentlessly pursued by the Ticking Crocodile of Time)?

Well, no, not really, for reasons now explained (and please excuse the simplistic presentation, but I'm trying to keep it to the level that, mostly, I could have grasped at the time I was first entranced by Secrets of the Atom – so no mention of orbitals etc)

1) The chemical behaviour of each and every atom in the known universe is controlled by the number of electrons it contains, and the shells and subshells that they occupy. Each shell is identified by its radial quantum number (n) and each subshell by its angular quantum number (ℓ). There are two other quantum numbers (mℓ and ms) which, though extremely important, are inessential for present purposes.

2) The maximum capacity of each type of subshell, and the conventional subshell-symbol, is as tabulated below.

So to accommodate all the ca 120 elements currently (Apr 2017) known or posited, Nature might presumably have to extend just as far as the s and p subshells of the 6th shell for Unbilinium.

4) The full specification of shells and subshells for the atoms of each element in the Periodic Table can established by working upwards from hydrogen from one element to the next, deriving each specification from the previous one by mentally adding an extra electron. When the last subshell of the current shell is filled to capacity, the process continues to the first subshell of the next shell. And so on until all electrons (ie as per the Atomic Number) are accommodated, whereupon the process continues to the next atom. This process is called the Aufbau (building-up) principle - but there's a fly in the ointment ...

And also that the full specification of shells and subshells for an atom is known as its electronic configuration, though a more detailed configuration would also include a specification of mℓ and ms values for its outermost subshell (or at least for the orbitals – oh dear, I've mentioned them – within it) but we're then venturing into the realms of quantum mechanics, rather like disappearing into a black rabbit hole.

5) If this naïve Aufbau principle genuinely prevailed, the atomic subshells would be filled in the sequence corresponding to the red text above

but (for reasons still controversial) a restriction to this, known as the Madelung rule,1,  2 prevails, and the subshells are filled in a sequence rather different from that specified in the red text above, that is to say

the consequences of which are better understood from a tabulation.

The two diagrams below, in their very different ways, present a very clear overview of what's going on: 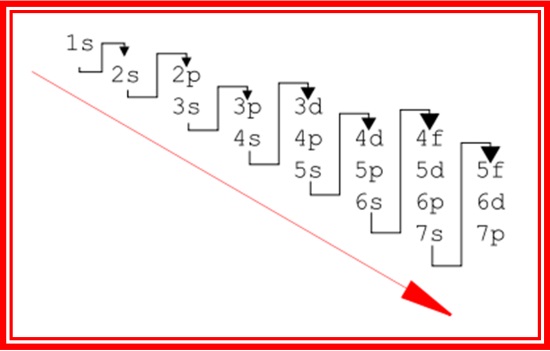 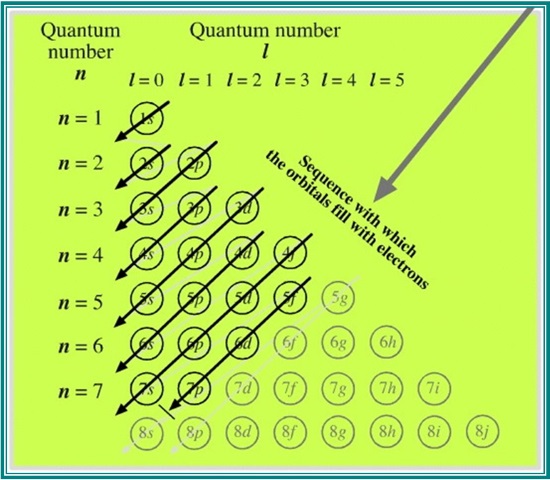 The Madelung rule is entirely successful in predicting the sequence in which subshells and shells are filled, success being defined as close conformity with the periodicity of the elemental properties in each vertical group, and their gradual variations across each horizontal period.

6) There are, however, minor exceptions to the configurations that the Madelung rule predicts, due to spin-orbit perturbations (so I'm told).

In the first transition series, for example,

These are respectively covered by further rules that

7) And there are analogous exceptions in the lanthanide and actinide series, additionally complicated by relativistic perturbations (so I'm told), and the periodicity of their chemistry gets very confused.

8) Click here for a list of all such minor exceptions, and here for a tabulation of the actual electronic configurations of all the elements.

The large-scale consequences of the Madelung rule are best revealed diagrammatically by a relatively unknown version of the Periodic Table, first advocated years ago by an unjustly-neglected visionary French polymath, a geologist by profession, called Charles Janet.

It involves an unprecedented shuffle of the table, and it focuses on the (untweaked) Aufbau/Madelung sequence. All I can show at the moment is the image from Wikipedia – it's utterly stunning in its stark simplicity and clarity, the result of switching the alkali and alkaline earth columns from the extreme left to the extreme right.

From my own point of view it corners the two most controversial individuals in the entire Periodic Table (apart from hydrogen, which everybody is bothered about) – viz helium and beryllium. For a naïf such as myself, why isn't helium (1s2) an alkaline earth metal, or alternatively, why isn't beryllium (1s2 2s2) a noble gas (or however IUPAC currently refer to Group 0 or 18)? This question has more to do with the mythology of quantum chemistry (which I shall revisit elsewhere in this website) than the hard realities of nomenclature.