Sparrow in the Feasting Hall

I'd like to conclude with an account from Saxon times. Not everybody will concur with the author's closing paragraphs, some of which I've omitted, but the imagery of the sparrow in the feasting-hall is unforgettable.

The first mission from Rome to the English was that of St. Augustine who started his work in Kent in 597. In 601 a second group of monks arrived, including St.Paulinus whose feast is 10th October. Sometime after 616, Edwin, the pagan king of Northumbria, asked for the hand in marriage of Ethelburga, the sister of the king of Kent. He was told that a Christian princess could not marry a pagan, but he promised that she would be free to practise her religion, and that he would listen to Christian preachers, and seriously consider becoming a Christian himself. At this Ethelburga agreed to marry him, and went north in 625, taking with her as chaplain the monk Paulinus, who was consecrated bishop for the purpose. The Venerable Bede (c. 673-735) describes Paulinus as '"a man tall of stature, a little stooping, with black hair and a thin face, a hooked and thin nose, his aspect both venerable and awe-inspiring.'" 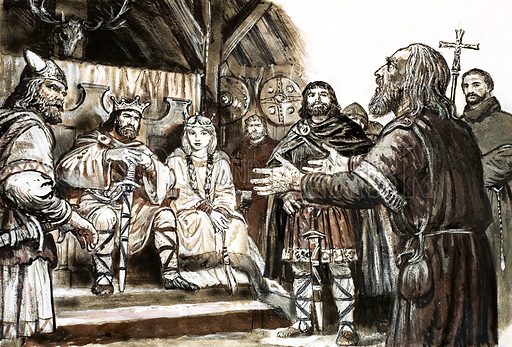 Bede records the story of King Edwin of Northumberland at the hands of this missionary bishop. Edwin was willing to hear the preaching of Paulinus and to convert at once, but he called together a meeting of his council of elders, which included his pagan high priest, Coifi. Paulinus presented the gospel to him, and one of the chief advisors replied with this observation:

'"Your Majesty, when we compare the present life of man on earth with that time of which we have no knowledge, it seems to me like the swift flight of a single sparrow through the banqueting-hall where you are sitting at dinner on a winter's day with your thegns and counsellors. In the midst there is a comforting fire to warm the hall; outside the storms of winter rain or snow are raging. This sparrow flies swiftly in through one door of the hall, and out through another. While he is inside, he is safe from the winter storms; but after a moment of comfort, he vanishes from sight into the wintry world from which he came. Even so, man appears on earth for a little while; but of what went before this life or of what follows, we know nothing. Therefore, if this new teaching has brought any more certain knowledge, it seems only right that we should follow it.'" 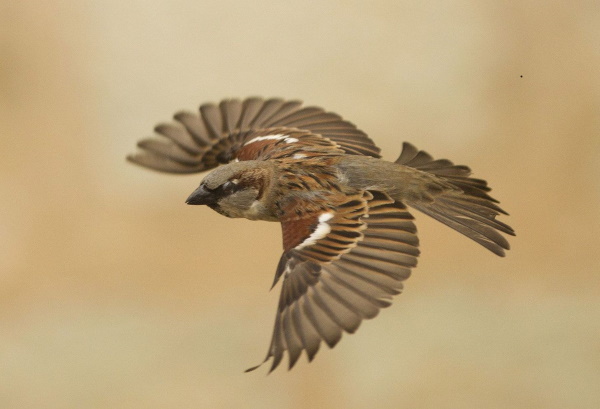 The King did become a Christian and St.Paulinus went on to convert many in the kingdom of Northumbria, notably the great Hilda who received the monastic habit from St. Aidan who served the next king of Northumbria after Edwin, Oswald.

It is the story of the sparrow flying through the King's Hall in winter that interests me today. We can imagine that little bird in the howling cold outside the hall being drawn towards the warmth, the light and the sounds of the King's feast. He flies into the hall perhaps pausing briefly to peck at a few crumbs on the floor before being disturbed and flying out again into the dark night. That story of course stands for our journey through life. Without God and eternal life it seems like our journey is brief and with a little comfort but essentially from the dark and the unknown into the dark and the unknown. Like a senseless bird, few stop to consider the meaning of this curious journey, this fleeting flight of consciousness, this brief life.

The power of the story as told to the King rests on a second reference and that perhaps applies to the King himself, and maybe his own banquet on the preceding night. It is a parable of the King himself distracted by his own comforts and consoled falsely by his own power and prestige. His own religious advisers, not Christians, and some of his noblemen get the point of St.Paulinus' teaching. In the words of the Preacher from the Biblical book of Ecclesiastes, all this paraphernalia around the king is '"vanity.'" The King needs to consider his own soul. He must not place his confidence in his wealth, his power or his army. There is in the words of the story '"a more certain knowledge.'" What then is this knowledge concerning life and death that evidently made the preaching of St.Paulinus so successful?

We have no record of the saint's sermons but we must know the substantial message since it is the unerring challenge of the Gospel continually presented to all conditions of men and women throughout the ages. It is to be found in Christ's parable of the foolish rich man and his barns who paid no thought for the morrow as it is told in the Gospel of St. Luke (12:16-21):-

16 Then He spoke a parable to them, saying: '"The ground of a certain rich man yielded plentifully. 17 And he thought within himself, saying, ‘What shall I do, since I have no room to store my crops?' 18 So he said, ‘I will do this: I will pull down my barns and build greater, and there I will store all my crops and my goods. 19 And I will say to my soul, '"Soul, you have many goods laid up for many years; take your ease; eat, drink, and be merry.'"' 20 But God said to him, ‘Fool! This night your soul will be required of you; then whose will those things be which you have provided?'" 21 '"So is he who lays up treasure for himself, and is not rich toward God.'" 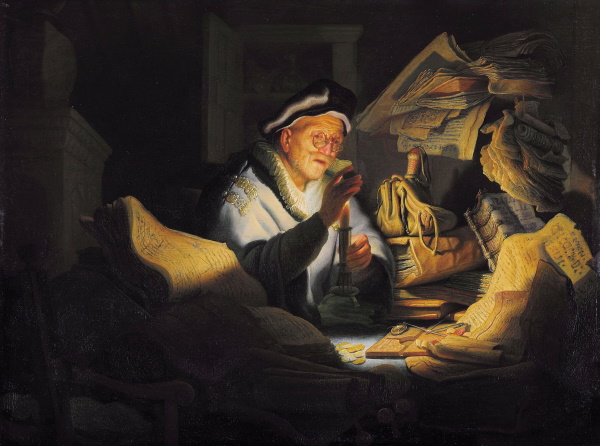 The Parable of the Rich Fool (Rembrandt 1627)

… [Life] is a training ground for eternity, not three score years and ten to fritter away in futility. Let us then be wise sparrows, each one known by the heavenly Father and in turn knowing him, flying as it were on the back of the eagle of the gospel of life to our true nest in the heavens.