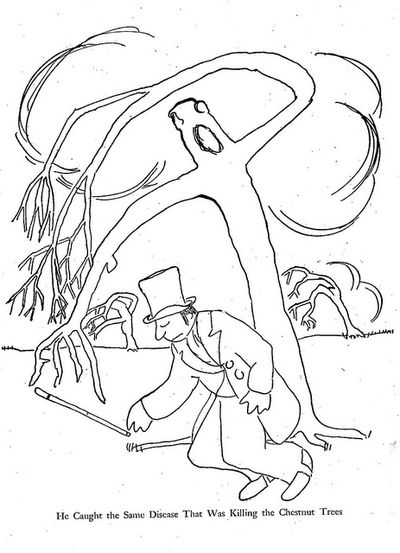 Gaia doesn't have to take things quite as far the character in this classic Thurber illustration – though our native trees in England have been under threat for many decades now from infections and parasites carelessly introduced from abroad. Elms, Horse Chestnuts and Ash are just three of the dozens of our species under threat.

Though we may not be vulnerable to The Same Disease That's Killing the Chestnut Trees, we are certainly at risk – and have been for centuries – from farm animals. A good example is The King's Evil, as it was known in England back in the 18th century.

King's evil, scrofula (q.v.), or struma, a tuberculous swelling of the lymph glands, once popularly supposed to be curable by the touch of royalty. The custom of touching was first adopted in England by Edward the Confessor and in France by Philip I. In England the practice was attended with great ceremony; and from the time of Henry VII sufferers were presented with especially touched coins to be worn as amulets or charms. The custom reached its zenith during the Restoration: Charles II is said to have touched more than 90,000 victims between 1660 and 1682. The last royal healer in England was Queen Anne, who touched 200 victims in 1712. In France the ceremony persisted for another century and was even briefly revived by Charles X between 1824 and 1830.

Samuel Johnson was taken by his mother up to London from Litchfield at the age of 3 to be one of those afflicted who were touched by Queen Anne that year. It is now known to be a form of tuberculosis (TB). 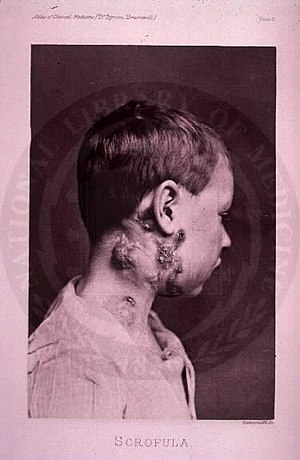 Not very nice at all to look at, but cervical (neck) TB, unlike pulmonary (lung) TB, wasn't fatal as far as I know. It was known to the Romans, who gave it the name of scrofula which in Latin also meant brood sow – in other words, you could catch it from a female pig used for breeding.

Although I don't think that either of us had been exposed to a pig farm, both my wife Sonia and I separately contracted cervical TB as small children in the mid/late 1940's. I can still clearly remember being taken for treatment (probably at the Leicester Royal Infirmary) when my parents and I lived in Loughborough. I was treated surgically (and still have the scar on my neck) and with the new wonder-drug streptomycin, the side-effects of which have been a trial ever since.

But if neither Sonia or myself had been treated to a tour of a pig-farm, how had we contracted scrofula? The answer is of course unpasteurised dairy milk, tainted with TB. The disease could be passed to humans from cows as well as pigs, though at that time nobody had thought of blaming badgers.