Coronavirus: Putting the spotlight on the global wildlife trade 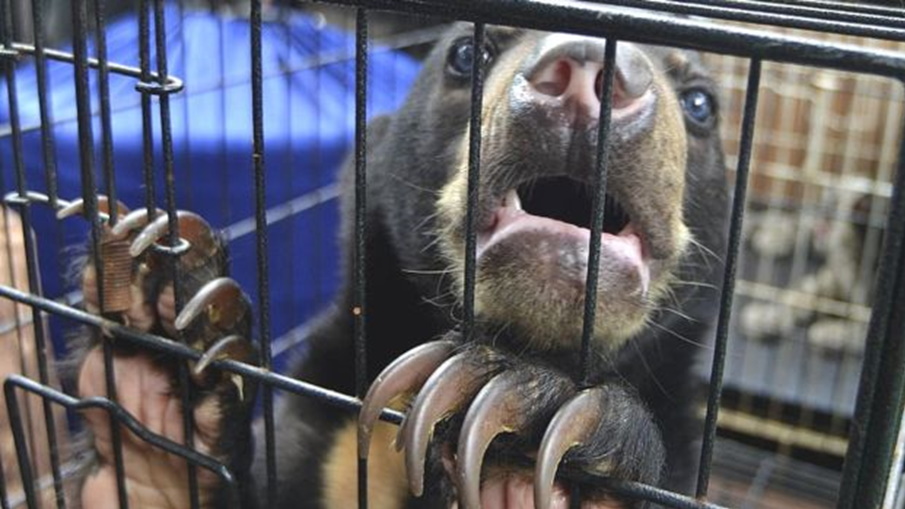 Conservation experts say the coronavirus pandemic, which likely originated at a market selling wild animals in China, is a watershed moment for curbing the global wildlife trade, which can drive extinction and spread disease.

When Adam Peyman walked into a restaurant in Vietnam to order a meal he was shocked to find wild animals, including threatened species, on the menu, alongside traditional rice, noodles and seafood. Sting ray, porcupine, softshell turtle, wild pig and wild goat were all on offer.

It was a bit of a surprise to see these foods, says the wildlife manager for the animal welfare organisation, Humane Society International. "But, these kinds of wild foods are considered something of a luxury."

Feasting on exotic game has become a sign of status and wealth in some Asian countries. The desire for wildlife as food or medicine drives a trade in wild animals, some procured illegally, creating a breeding ground for disease and the chance for viruses to leap to humans. 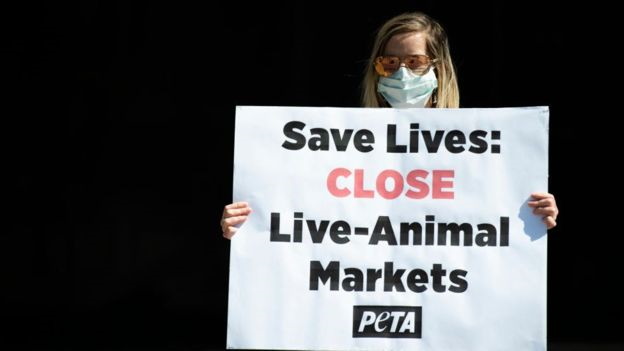 US protest by the animal rights organisation, Peta

The consumption of wild animals, especially wild mammals, which can carry diseases that can cross the species barrier, does pose a real threat to human health, says Mr Peyman. "It's hard to tell whether these animals are taken from the wild legally or not, some of them could have been smuggled in and then sold on these wet markets, as they're called."

Wet markets have become a familiar sight in many countries in Southeast Asia, particularly mainland China. Selling live fish, chickens and wildlife, as well as fresh fruit and vegetables, they get their name from the melting ice used to preserve goods, as well as to wash the floors clean of blood from butchered animals. 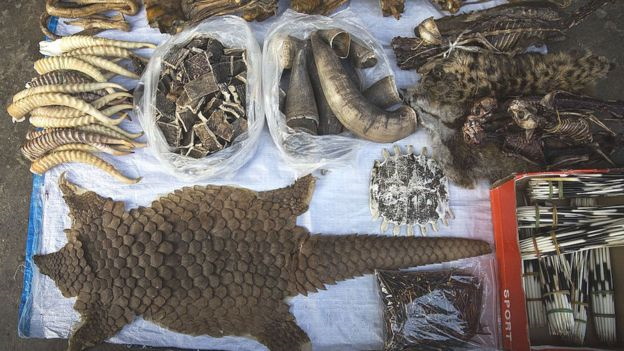 Wet markets can be "timebombs" for epidemics, says Prof Andrew Cunningham, deputy director of science at the Zoological Society of London (ZSL). "This sort of way that we treat... animals as if they're just our commodities for us to plunder - it comes back to bite us and it's no surprise."

The current coronavirus pandemic, which has claimed tens of thousands of lives, likely originated in the Wuhan seafood market. Despite its name, the market was selling a lot more than fish, including snakes, porcupine and deer, according to one report.

After an initial cluster of cases connected to the market, the virus began spreading dramatically inside China, before reaching much of the world. The origins of the novel virus are unknown, but it most likely emerged in a bat, then made the leap to humans via another wild animal host.

Not only will this help prevent the spread of disease, it will address one of the major drivers of species extinction, says the society. 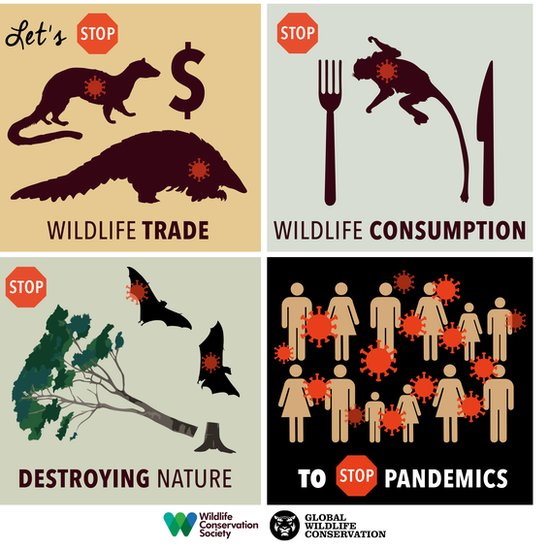 The Wildlife Conservation Society is calling for a ban on wildlife

In the wake of the initial outbreak in Wuhan, China introduced a ban on all farming and consumption of live wildlife, which is expected to become law later this year. Thousands of wildlife farms raising animals such as porcupines, civets and turtles have been shut down. However, loopholes remain, such as the trade in wild animals for medicine, pets and scientific research.

Then there is the traditional Chinese medicines industry, which also uses wildlife products. Only recently, the Chinese government appears to have approved the use of an injection - ironically as a coronavirus treatment - that contains bear bile.

Campaigners worry these exemptions could pave way for illegal trade on wildlife meat, as it did in the past with, for instance, tiger and leopard body parts. So pangolin meat could still be available as the animal's scales can be used for medicine and its nails as ornaments.

All eyes, therefore, are on the soon-to-be amended wildlife protection law - whether and how it would address those loopholes.

In neighbouring Vietnam, the government is rushing through legislation to clamp down on illegal wildlife trade at street markets and online. But some say it won't be easy to change cultural attitudes or to enforce bans, when wet markets are part of the local culture, with the belief that the meat sold there is fresh and cheap.

Prof Dirk Pfeiffer of City University of Hong Kong says the real issue is demand. "The people who are providing them, whether that's farmed wild animals or animals from the wild, that's an important source of income for them. Pushing it underground, that's not the solution, so it needs to be a phased process."

This isn't the first time a pandemic has put the spotlight on wildlife trade. The 2002 Sars outbreak, which started in China and claimed more than 700 lives, was linked to bats and mongoose-like civets, although the source was never confirmed. 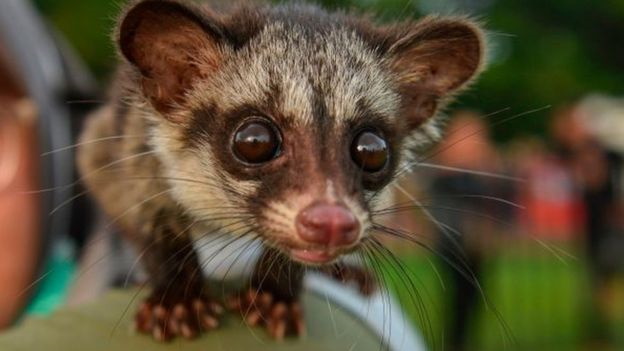 Asian civet in Banda Aceh; the mammals were linked to Sars

Prof Cunningham says if we're to stop another pandemic in the future, we must focus on causes as well as effects. At the root of the problem is the destruction of nature, bringing animals and humans into conflict.

Even in protected forests, the forests are still there, but the wildlife's gone from within them because they have ended up in markets, he says. ".And it's easy to finger point, but it's not just happening in China, it's happening in many other countries and even in the western world. We like to have exotic pets and many of those are wild caught and we ought to be putting our own house in order too."