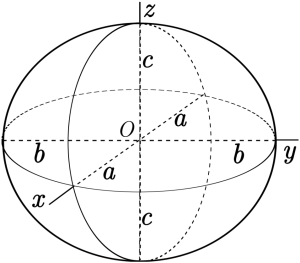 The points (a,0,0), (0,b,0) and (0,0,c) lie on the surface and the line segments from the origin to these points are called the semi-principal axes of length a, b, c. There are four distinct cases:

The oblate and prolate spheroids are symmetrical around the z-axis, and can be respectively likened to spheres that have been flattened or elongated along the +ve and –ve z-axes.

More precisely, the oblate or prolate ellipsoids can be generated by rotating the (x,z) ellipse through 180° around the z-axis, after first choosing c<a in the oblate case, or c>a in the prolate case. In both cases, b becomes necessarily equal to a.

In the context of domes, of course, we're really only interested in the upper halves (hemispheres or semi-ellipsoids) of these shapes.