Binkie was an exemplar of the female of a species now almost extinct – dedicated to plain living and high thinking. At some point during her career with Campbell and Gifford she encountered a soulmate in Robert Waddell (always known as RW, as his wife Hannah was known as Mrs RW), a consultant engineer some thirty years older than her. My Aunt Jane (who was closer to him than was the rest of the family) said firmly they fell in love with one another, but as romance, let alone anything else, was of course out of the question, they simply shared their love of literature and classical music. These days that would be regarded as laughably self-restrained.

Unfortunately Sandy's earlier letter and the material he enclosed haven't come to light. But the references to tank-tracks and the urgent need for facilities to produce super-hardened steel proof against the depredation of North African sand fit in perfectly with the involvement of both Robert (click here) and indeed his son Walter (click here) with this issue. 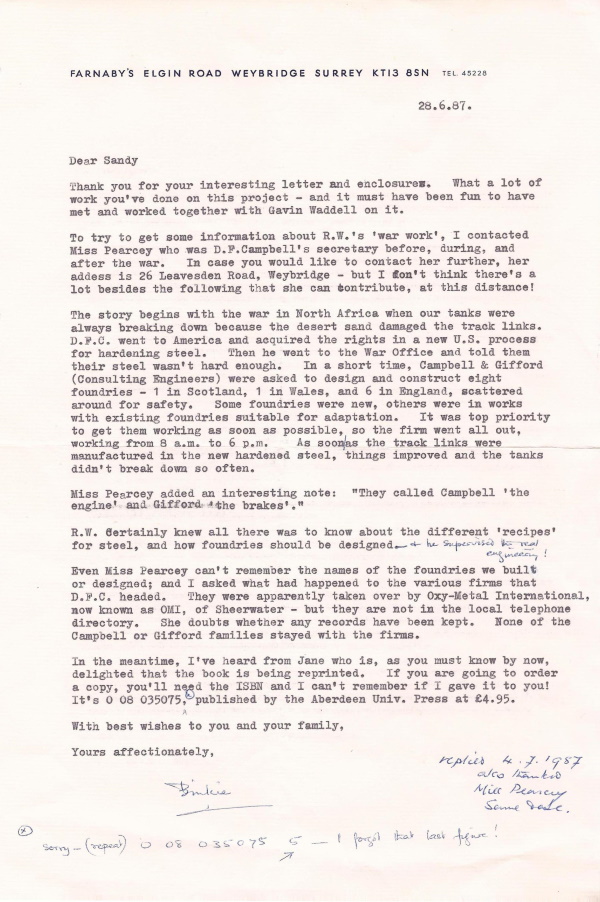 At the same sort of time that I was unloaded on Binkie that weekend, my father also took me on a visit to two quite elderly ladies, Dot and Leonie Ridges, who (as all the most interesting people do) lived in Hampstead. I believe there was another sister, Marian, and a brother Jimmy, somewhere in the family frame, and that they were all from Newry – I do recall that Dot and Leonie had retained a strong Ulster twang. Needless to say, Walter didn't explain in advance who they were, except that they were something to do with his father Robert. He was very much at ease with them, and I suspect they were retirees from Campbell and Gifford – and I have a note from somewhere that Jimmy Ridges had been a salesman for C & G.

Dot (Dorothy) Ridges doesn't ring any bells on the internet but Leonie Victoria Ridges (8 Jul 1887 - 26 Sep 1972), born in Newry, resident in Hampstead, certainly does. It's a little bit spooky that all that remains of them on earth are a few tweaks and folds of protein molecules in my long-term memory archive, and pretty soon I too will just be a few tweaks and folds in someone else's protein molecules! 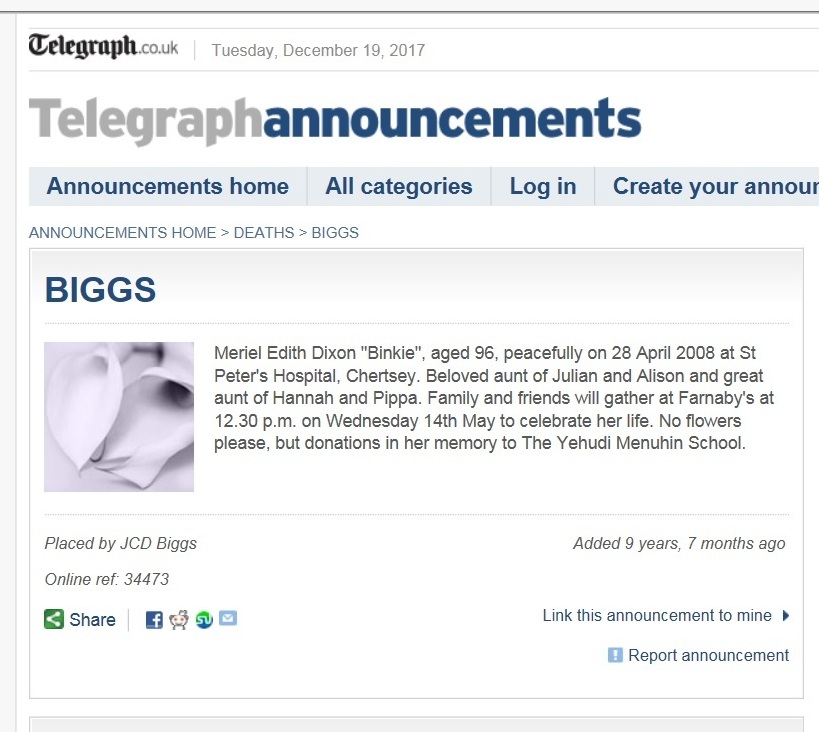 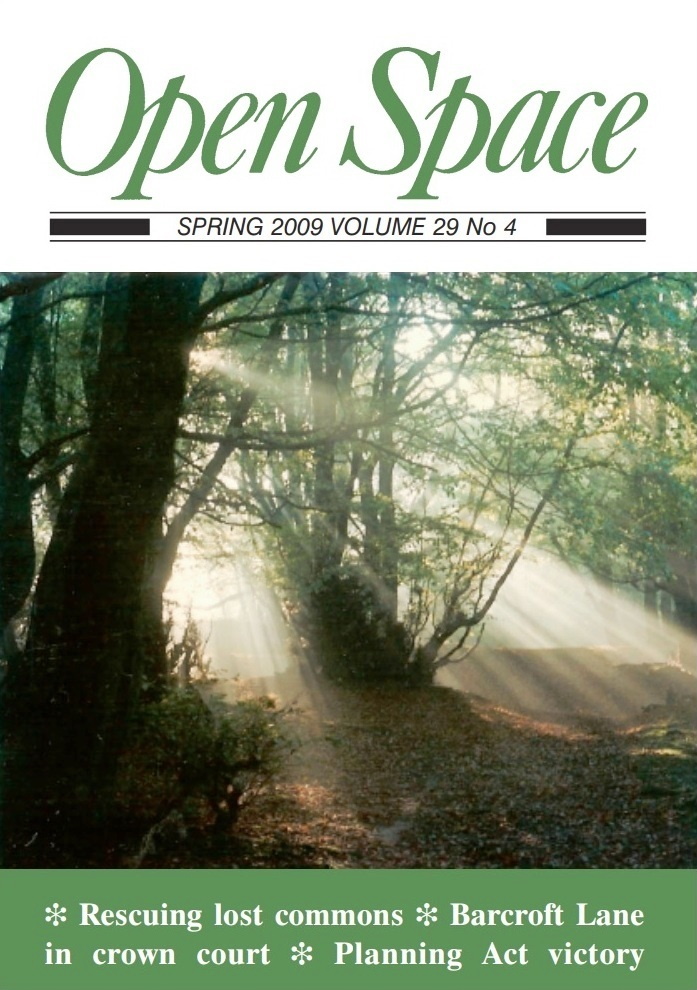 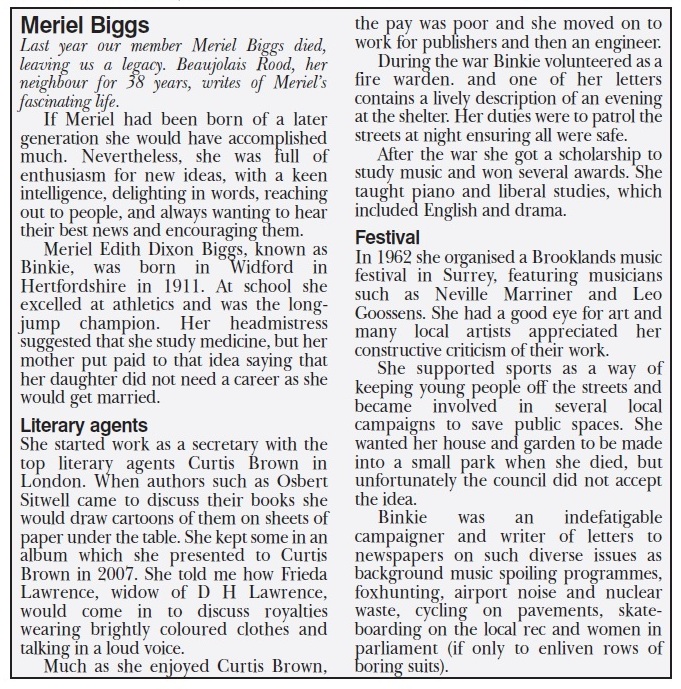 If Meriel had been born of a later generation she would have accomplished much. Nevertheless, she was full of enthusiasm for new ideas, with a keen intelligence, delighting in words, reaching out to people, and always wanting to hear their best news and encouraging them.

Meriel Edith Dixon Biggs, known as Binkie, was born in Widford in Hertfordshire in 1911. At school she excelled at athletics and was the long-jump champion. Her headmistress suggested that she study medicine, but her mother put paid to that idea saying that her daughter did not need a career as she would get married.

She started work as a secretary with the top literary agents Curtis Brown in London. When authors such as Osbert Sitwell came to discuss their books she would draw cartoons of them on sheets of paper under the table. She kept some in an album which she presented to Curtis Brown in 2007. She told me how Frieda Lawrence, widow of D H Lawrence, would come in to discuss royalties wearing brightly coloured clothes and talking in a loud voice.

Much as she enjoyed Curtis Brown, the pay was poor and she moved on to work for publishers and then an engineer [Campbell Gifford].

During the war Binkie volunteered as a fire warden. and one of her letters contains a lively description of an evening at the shelter. Her duties were to patrol the streets at night ensuring all were safe.

After the war she got a scholarship to study music and won several awards. She taught piano and liberal studies, which included English and drama.

In 1962 she organised a Brooklands music festival in Surrey, featuring musicians such as Neville Marriner and Leo Goossens. She had a good eye for art and many local artists appreciated her constructive criticism of their work.

She supported sports as a way of keeping young people off the streets and became involved in several local campaigns to save public spaces. She wanted her house and garden to be made into a small park when she died, but unfortunately the council did not accept the idea.

Binkie was an indefatigable campaigner and writer of letters to newspapers on such diverse issues as background music spoiling programmes, foxhunting, airport noise and nuclear waste, cycling on pavements, skate-boarding on the local recreation ground and women in parliament (if only to enliven rows of boring suits). 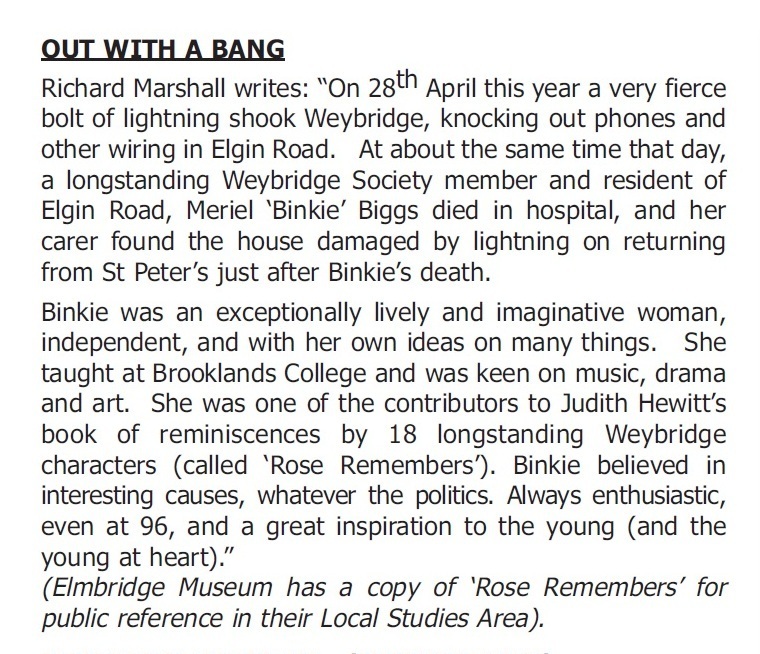 I certainly don't recollect Binkie's bungalow as being anything like as palatial and ‘up-market' as it now seems to have become, to judge from the picture below. 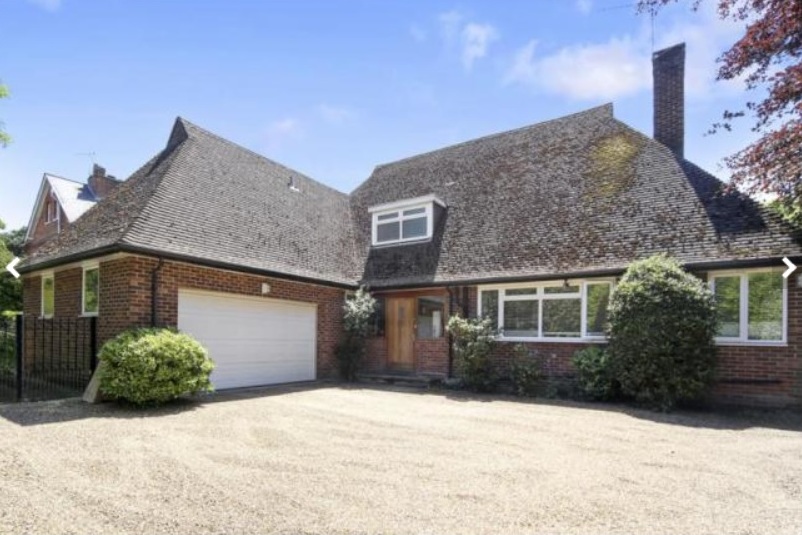 aka Farnabys (nb omission of discreetly omitted tricky apostrophe – she would have been much amused), Elgin Road, Weybridge KT13 8SN (5 bedrooms, 3 bathrooms, 4 reception rooms, price estimate £1.64 million (she would have been horrified).