I'm extremely grateful to the archivist of Charterhouse for providing access to the Charterhouse Register from which the extract below has been reproduced, and for the additional information also reproduced below.

I'm also extremely grateful to the archivist of Oriel College for sending a page image from the Oriel annals.

He arrived at the start of the Oration Quarter in 1940, and was assigned to the Saunderites House. 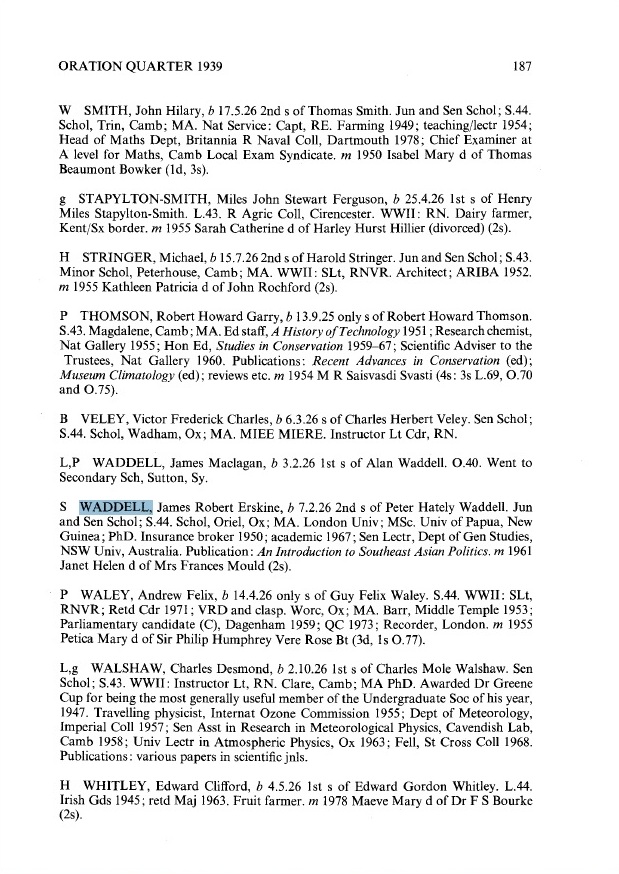 I don't know what "Jun and Sen Schol" (clearly Junior and Senior Scholarships) indicates – perhaps something to do with bursaries to cover both his earlier years and later years at Charterhouse.

He was rather less gifted at sport than his younger brother John, but as we can see elsewhere he was a great success at amateur dramatics.

He left at the end of the Summer Quarter in 1944, having gained a Charterhouse Benn Scholarship to Oriel College, Oxford. He was evidently granted deferment of his place at Oxford so that he could be conscripted into the Army. The Allied invasion of Normandy had just started (6 Jun 1944) and of course the Army took higher priority. 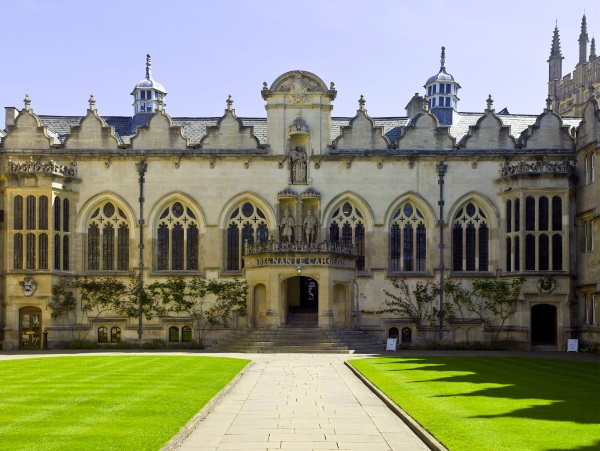 Having served in the Army during the final year of WWII (plus a year or two extra), after leaving Charterhouse, he matriculated at Oriel in the Michaelmas Term of 1947, and graduated with 2nd class honours in PPE (Philosophy, Politics and Economics), in 1950.

The biographical form reproduced below was completed in the 1950s by Robert (it's seemingly 'family' handwriting, though amended by another hand). Apparently, the College planned to publish a Registrum Orielense covering all members who matriculated 1901-1950 and so filled out such a form for each man. However, they never had the money to publish the results, and so only the forms survive. 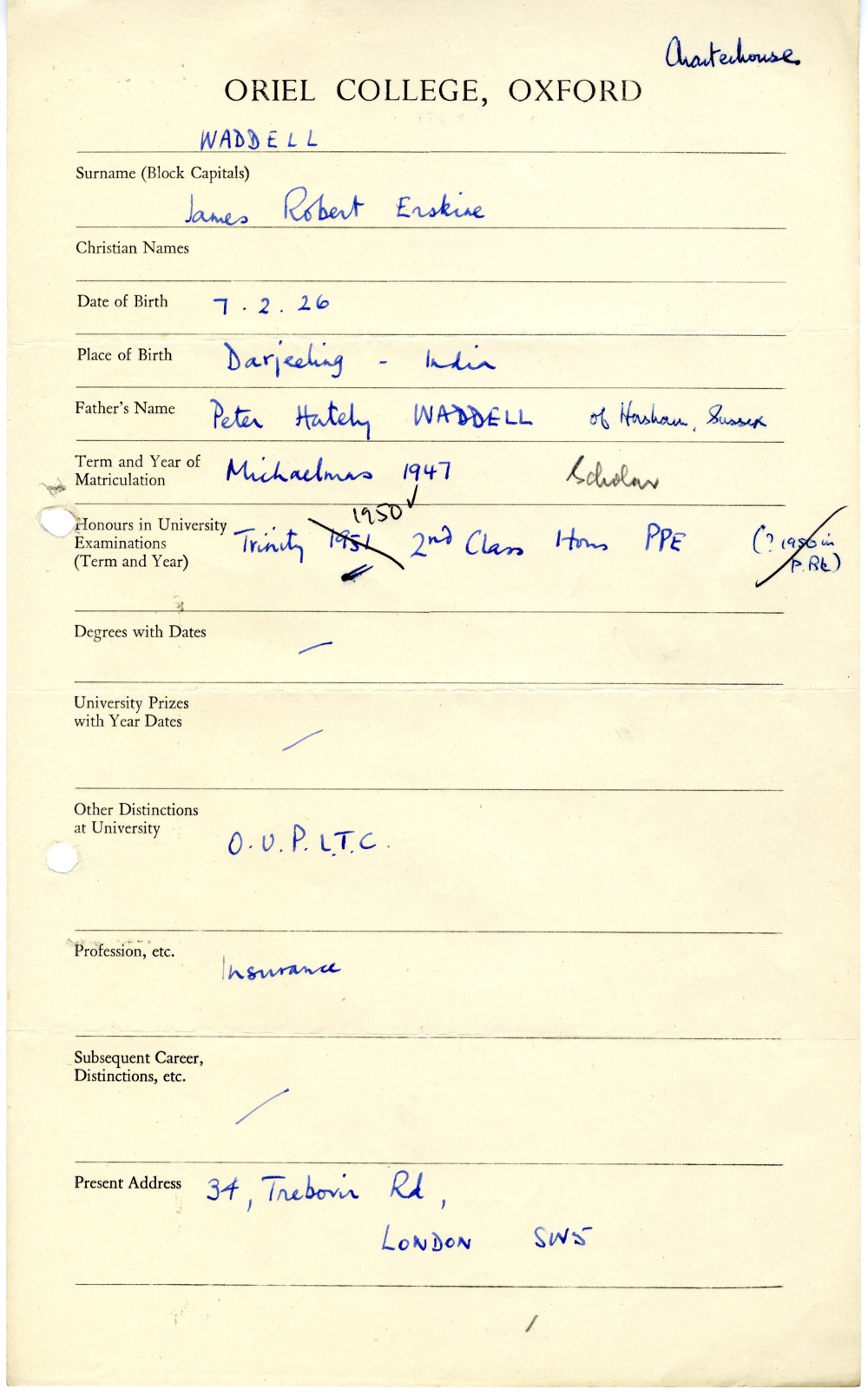 The mysterious initials OUPLTC, the meaning of which eluded even the Oriel Archivist, actually stand for Oxford University Penguins Lawn Tennis Club!

It's rather interesting that his then present address is given as 34 Trebovir Road, which to me signifies the address of John (his brother) and Julia (his sister-in-law). By a quirk of circumstance, however, both Robert and John emerged, from Oxford or the Army respectively, into the bitter-sweet, prelapsarianly innocent London in the same year of 1950.

(To me in retrospect, the 1950s were the last gasp of traditional decorum and propriety (whatever may have gone on behind the scenes), a quaintly distant era in which Niceness ruled supreme, where films like Genevieve and Doctor in the House, and musicals such as Salad Days, were the last word in "daring". Heigh ho.)

So there's no saying whose name was on the tenancy agreement, but it suited everybody concerned.

A period of three years elapsed between leaving Charterhouse in 1944 and going up to Oxford in 1947. The first year would have been as an Army conscript, but the two further years suggest that he accepted an offer of a Short Service Commission (SSC), the minimum term of service being three years. But I'm open to correction – he may quite possibly have served just one further year as National Service, and then spent another year in Civvy Street.

He was certainly gazetted as a 2nd Lieutenant in the King's Royal Rifle Corps in Sep 1945.

He married Sheilah Lucas in 1952, but that seems not to have worked, and in 1961 he remarried, to Helen Mould. They had two sons, Peter and David.

His stated career of Insurance, or Insurance Broker, was possibly a temporary stopgap to further his academic ambitions. It was at some point in the 1950s that he was awarded an MA by London University, and I guess it might have been the School of Oriental and African Studies in particular, and something to do with Southeast Asia, the focus of all his later academic expertise. I'm trying (Mar 2018) to confirm this with SOAS.

His career thereafter did indeed gravitate towards Southeast Easia, the very area in which his grandfather James Waddell had made his liveliood, and he eventually became a Senior Lecturer in the Department of General Studies at the University of New South Wales in Sydney.

Doubtless there were numerous others but itemised below are those that have so far made their way to the internet.

Replanting the banana tree: a study in ecologically sustainable development, 1991