On reflection (Jan 2018) this title is slightly oxymoronic, as heraldry encodes whence you've come and a footprint simply indicates whither you're heading (at least in the short term). Yes, unless you're wearing your shoes back to front (as the villain habitually does in detective stories), a footprint does also indicate where you're heading from, but heraldry does at least attempt to provide a much longer back-history, your pedigree, than revealing you've just come from the pub.

An alternative title would have been "Heraldic Fingerprint", as a set of dabs (which both my wife and I have had to provide on more than one occasion) does establish uniquely who you are. Interestingly, however, fingerprints aren't familial (unlike the Habsburg Jaw), and so they can't reveal your ancestry.

Another, better but less snappy, alternative would have been "Heraldic DNA test", as a DNA test provides in small-print detail (as I imperfectly understand these things, having dropped Biology in my fourth year at secondary school) what heraldry can only provide with a much broader brush. You discover not only who your mummies were but also who were your real daddies. The things that you're liable to think undeniable, they ain't necessarily so.

Also interesting is the etymology of the word "pedigree". Dictionaries define it as your ancestry or lineage, and give its origin as the French phrase "pied de grue".

But what indeed is a grue? One could turn to the wiktionary to find its meaning in a variety of languages, to discover that its meaning in French is "crane", whether a long-legged long-necked bird or an extended construction for hoisting heavy objects.

So it has exactly parallel double meanings in both French and English.

But, no matter in which language, what is so special about the foot of the avian variety of crane, and indeed the bird itself? There appear to be two reasons – firstly that the foot is anisodactylic, with the main toe (hallux) located behind, and three lesser digits (toes) splayed out in front, as were the lines connecting an individual with his forebear and his (male) offspring in mediæval family trees – and secondly the emotive legends about the crane that were spun by ancient authors. It is also deeply symbolic in Japanese and Norse legend.

Pliny the Elder, for example, wrote that cranes would appoint one of their number to stand guard while they slept. The sentry would hold a stone in its claw, so that if it fell asleep it would drop the stone and waken. A crane holding a stone in its claw is a well-known symbol in heraldry, and is known as a crane in its vigilance.

Baldur was of course the Christ-like figure in Norse legend, whose death at the unwitting hands of his blind brother Haldur was contrived by the fallen god Loki (does that sound familiar!). His story affected me very deeply as a child and has remained with me ever since.

I heard a voice, that cried,
"Baldur the Beautiful
Is dead, is dead!"
And through the misty air
Passed like the mournful cry
Of sunward sailing cranes.

In some varieties of crane the hallux looks pretty unobtrusive, or the lesser toes are fewer in number, but the heraldic images below are pretty unequivocal! 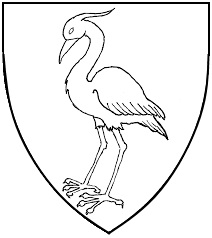 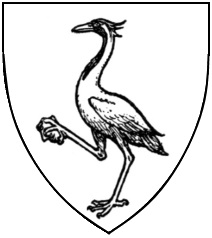 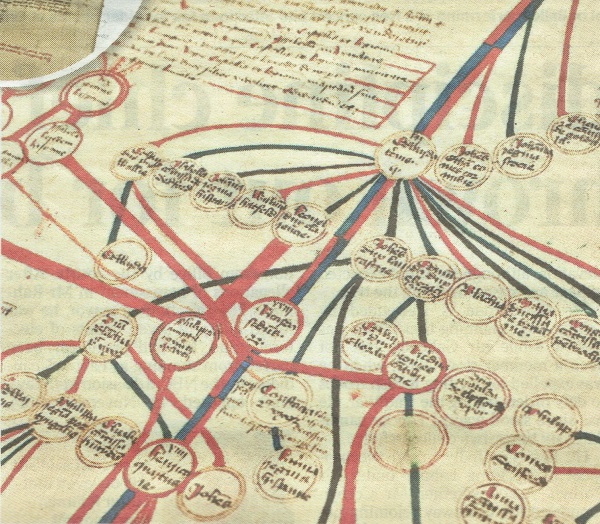 I must admit (Feb 2018) in the light of various frictions over the past few years, to feeling disenchanted about the alleged usefulness of heraldry in the search for family origins, at least in my own case.

Myself when young
Did eagerly frequent
Doctor and Sage
And heard Great Argument
About it and about
But evermore came out
By the same Door as in I went.

The slight misquotation is deliberate.

Even the basic terminology of the subject is contentious, as witness the phrase 'family coat of arms'. It is said by numerous contemporary sources that there is no such thing, that the phrase is meaningless.

It's only meaningless insofar as it's ambiguous. If the family is viewed laterally within a single generation, then it's true that no member of the family can use precisely the same arms as the senior male (the armiger). But if the family is viewed vertically, from one generation to the next, then the arms pass unchanged from the armiger in the previous generation to his direct male descendant in the following generation, who thereby become the current armiger. (There is a proviso in Scotland at least, that the arms have to be re-registered with the appropriate authority within a year and a day of the previous armiger's demise.)

Worse still, for my own family lineage, such candidates for legitimacy as the image originally reproduced, although virtually identical escutcheon-wise to the one beautifully depicted in two highly respectable sourcesA, B and reproduced below, have been dismissed as never having been registered with the appropriate authority, in this case the Lord Lyon King of Arms in Scotland. Hmmm. 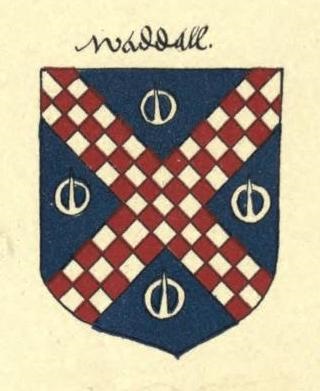 This wouldn't rob this one of intrinsic credibility, and it could of course in principle be used to extrapolate the history of the Balquhatstone family to a period earlier than the grant of the estate. But there seems to be no general agreement as to whence and why the four buckles came to be incorporated, for example. Vox et praeterea nihil.

Speaking absolutely from the heart, having been a feral child, then a dissipated adolescent and self-indulgent adult, and now a senescent in the last stages of decay, I would never dream of trying to appear otherwise. And I have (as already iterated) absolutely no yearning for a distinction of this sort. After all, honours, titles and the concomitant coats of arms, were historically awarded for feats of arms or other services rendered to the Sovereign (or during the reign of Charles II, for services rendered by one's wife to the Sovereign), and I've never been at risk of that sort of thing (though Mrs Robin does have A Bit Of A Thing about HRH the Prince of Wales).

But I do hope, in the unlikely event that a Waddell coat of arms were ever to be resurrected by a mainstream member of the family, that it should be as closely similar to the traditional version as possible. And the focus having moved from Scotland to England, France, Switzerland, and Australia, perhaps it might be registered elsewhere, and less restrictively, than with the Lyon King of Arms.