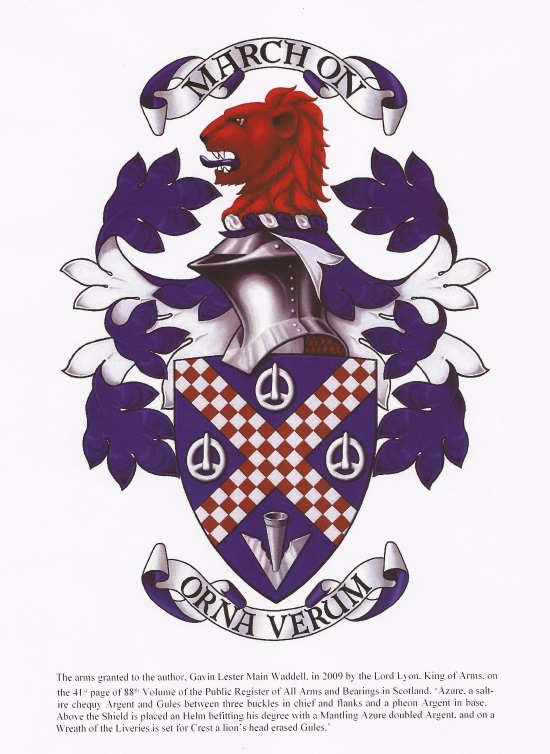 The three uppermost 'subordinaries' are buckles and the lowermost one is a pheon (arrow-head).

In the scroll at the very bottom is of course the motto traditionally associated with the Waddell family, and in that at the very top is Gavin's personal motto – technically referred to as a slogan.

The word slogan dates from 1513. It is a variant of the earlier slogorn, which was an Anglicisation of the Scottish Gaelic sluagh-ghairm (sluagh "army", "host" + gairm "cry"). Slogans are used in heraldry, most notably in Scottish heraldry. In Scottish heraldry slogans are used as mottoes, or secondary mottoes. Slogans usually appear above the crest on a coat of arms, though sometimes they appear as a secondary motto beneath the shield. There may be several possible origins for mottoes used in heraldry, however slogans are considered to have originated from battle cries or war cries.
......
......
......

In a recent telephone call (Jan 2018) Gavin returned to several issues that he feels strongly about in connection with my cavalier misuse of heraldic terminology, as I'll now try to elaborate upon.

In Scottish tradition, a coat of arms is personal rather than familial, or even primogenitive. It belongs to the holder, and lapses when he dies – it cannot be passed on.

Gavin himself, as stated above, went to considerable trouble and expense in his application to the Lord Lyon King of Arms for the superb coat of arms reproduced above, and matriculated [registered] for his exclusive use.

He accordingly objects in principle to phrases such as "the Waddell coat of arms", used at various points in the OrnaVerum website, and indeed to the use of the motto (in concatenated form) as the name of the website itself.

I understand his point of view, but I must respectfully disagree with it (well, I would, wouldn't I?), at least in part. The crest and the motto, for example, have for centuries been associated with the family name (indeed they were extensively used by my father back in the late 1950's on his personal and business correspondence) even where there was no particular general awareness of the escutcheon itself.

The point being that these things are known as family crests and family mottos, and have been exhaustively tabulated and published as such for the whole kingdom from the eighteenth century onwards – which would be quite impossible should they have flourished for just one generation rather than for generation upon generation for ever and aye.

I'm happy to admit that the escutcheon is a much more complicated matter, where the Scottish system – on which Gavin understandably rests his case – insists that a coat of arms is unique to an individual, and cannot be extended to any of his sons, let alone the eldest one (until he inherits), or brothers. So they would in turn would each need their own, unique coat of arms. This situation would rapidly become confusing and untenable, especially in the heat of battle.

As it probably did originally. So a system developed in which close male relatives of an armiger would be assigned essentially similar coats of arms distinguishable only by slight brisures [additions] or differences. This practice became known as cadency, in that the differenced arms cascaded, as it were, from the father's coat of arms, known as the undifferenced or plain coat.

And it too eventually became unworkable, so much so that in English heraldry the practice of differencing has been all but abandoned. So even though the bare phrase "Waddell coat of arms" is as Gavin says, impermissible in Scottish eyes, the mental insertion of "undifferenced" or "plain" will at least render it technically correct. I will add a note to this effect at the appropriate places.