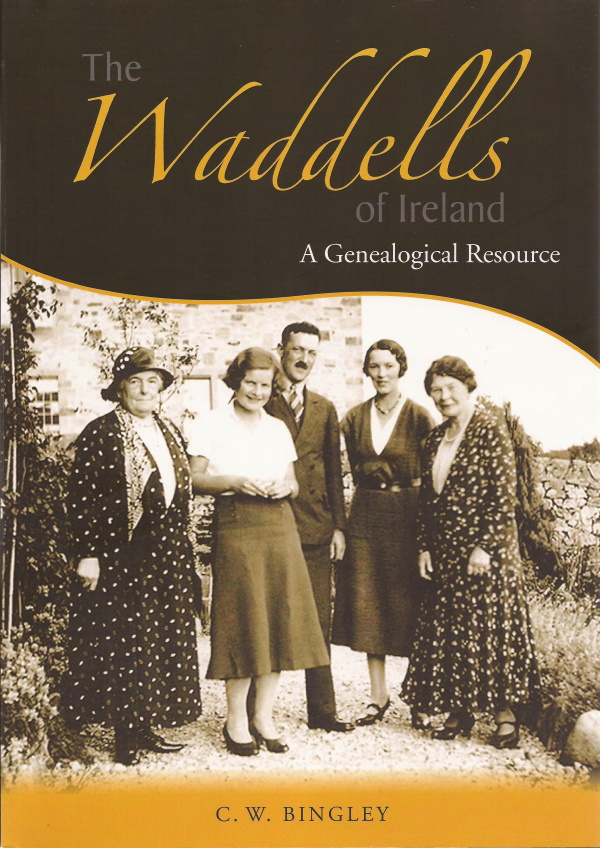 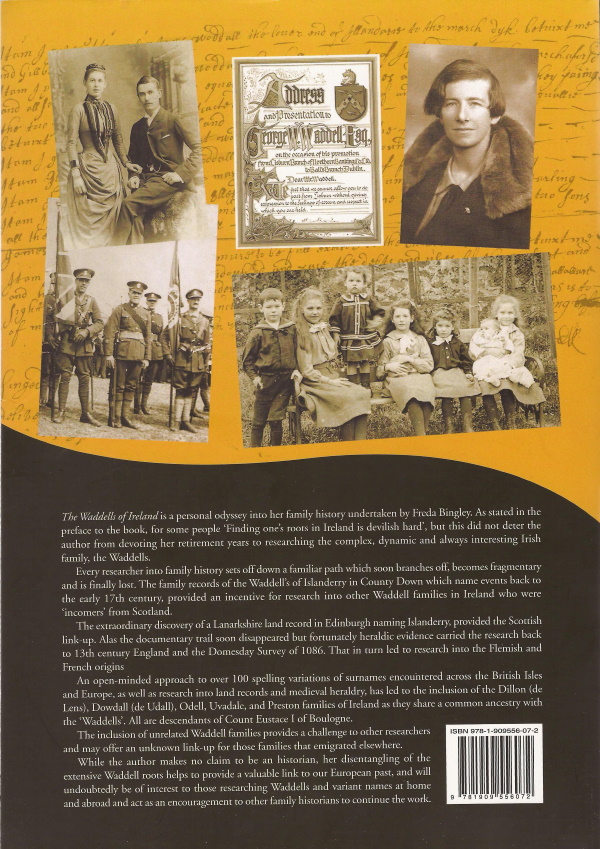 With only a very basic primary education, though with extraordinary powers of retention and assimilation, and starting from scratch in middle age, Freda decided to investigate the origins and history of the surname Waddell (or similar), principally in Ireland, but also from its roots in Scotland.

The Ulster Scots [had] migrated to Ireland in large numbers both as a result of the government-sanctioned Plantation of Ulster, a planned process of colonisation which took place under the auspices of James VI of Scotland and I of England on land confiscated from members of the Gaelic nobility of Ireland who fled Ulster, and as part of a larger migration or unplanned wave of settlement.

Ulster Scots emigrated onwards from Ireland in significant numbers to what is now the United States and to all corners of the then-worldwide British Empire - what are now Canada [as did Freda’s parents], Australia, New Zealand, South Africa, the West Indies, to British India and to a lesser extent to Argentina and Chile.

Scotch-Irish (or Scots-Irish) is a traditional term for Ulster Scots who emigrated to America.

In their turn, those Scottish roots derived from (1) the Flemings that financed William the Bastard’s invasion of England, and (2) his Norman henchmen who were allocated

In their turn, those Scottish roots derived from (1) the Flemings that financed William the Bastard’s invasion of England, and (2) his Norman henchmen who were allocated great estates in England, and (3) the Scottish monarchs who co-opted the younger Normans to seek their fortunes by helping to keep the peace north of the border.

All this was grist to her mill, as will gradually emerge. But firstly we must put her into what will prove to be quite a complex context. Please note references TWOI to page numbers in The Waddells of Ireland – and that “Caraline” isn’t a typo!

In the tabulation below I’ve used TWOI to trace Freda’s Irish lineage back to the estate, and house, of Islandderry in the Dromore area of Co Down, and potentially further still to the Moffat Hills branch of the Waddells in the county of Lanarkshire in Scotland. It inevitably gets wobblier the further back it goes, and the first unequivocal figures were Alexander Waddell and his wife Elizabeth Hamilton, which is where I begin.

Extracts from a thesis written by Martin Campbell, Belfast in the spring of 1992. The Townland of Islandderry lies 3 miles to the west of the town of Dromore, Co Down, NI.

...Prior to the rebellion of the Irish Catholics of October 1641 the townland was the property of Art Oge Mac Glaisne Magennis. Following the defeat at the hands of Cromwell in February 1642 Art Oge had to forfeit his lands to the Crown.

The first proprietor was Alexander Woodall/Waddell from Moffat Hills in Lanarkshire, Scotland, who paid a quit rent of £5.13.4 to Art Oge for 679 acres, 3 roods and 4 perches. This was the beginning of a long association between the Waddell family and Islandderry.

Alexander Waddell built Islandderry House on the site of a rath overlooking the surrounding countryside, across the Lagan, as far as the Mournes.....

(As per Wikipedia, a townland is a small geographical division of land used in Ireland and in the Western Isles in Scotland. The townland system is of Gaelic origin, pre-dating the Norman invasion, and most have names of Irish origin.)

This tabulation is best read in conjunction with TWOI, but is mind-bendingly difficult until you get accustomed to the genealogical format of the latter. Nevertheless there seems (to me anyway) to be a serious disconnect above Generation -9 which dispels any hopes of connecting with Martin Campbell’s chronology.

In search of a name

I can confirm the moronic playground jibes that anybody with an unusual surname – or middle name – has to put up with at school. Oddly enough, though I say it with no sense of unfairness, the Jewish boys – some with much more exotic surnames – at my secondary school in London never got anything like the mocking I did. These days I could probably sue the eejit perpetrators for £ squillions for compromising my “mental health”.

But it didn’t really bother me – it was nothing in comparison with one Jewish boy: early in the first term, Mr Porter, the senior Modern Languages master, enquired of various boys what their surname was so that he could explain its origin. Suddenly there was a banging of desk-tops and a cacophony of shouts “Ask him, sir, ask him” – and so Mr Porter did, and the wretched boy muttered “Wankmuller, sir”.

I didn’t understand what was going on, but Mr Porter turned bright red, and said rather feebly, “Ah yes, that means Jolly Miller” and moved swiftly on with the lesson.

But a name is not just a monicker, it’s a connection with where you have come from and indeed who you are. And Freda’s quest, begun in Canada and then in Ireland (where the family had been stranded by WW2), continued in England, and indeed extended backwards into earlier eras, almost nine hundred years previously. 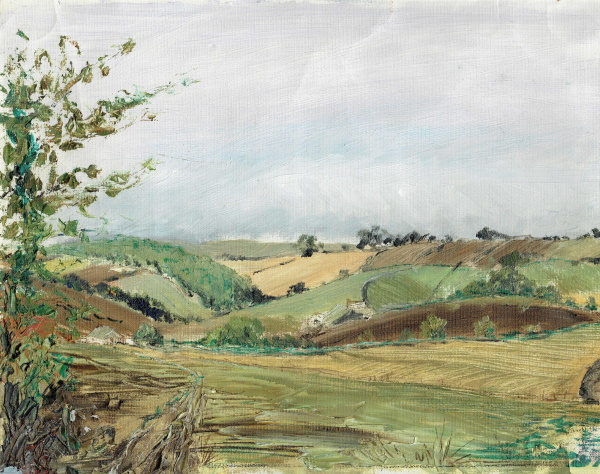 Freda never wasted time with elaborate preparations, and on a Campervan trip through the Cotswolds one day, they had parked for a while in a layby at the top of Fish Hill, overlooking the village of Broadway, often described as the Jewel of the Cotswolds. So while Keith pottered around brewing up some tea, Freda got out her painting materials, set up the easel, and got to work on an impromptu picture. But eschewing the conventional prettiness of the village itself, Freda’s subject was the undulating landscape in quite a different direction.

In due course she presented the canvas to us, and although I’m not sure if it’s my cup of tea, we had it framed and it’s now a permanent memento of her vigorous approach to life.

Though she never mentioned such matters conversationally, Freda evidently had a very definite view of the meaning and purpose of life. In the same way that it differed from mine, as the subject of her picture wasn’t what I would have chosen, I can appreciate both in retrospect.

She must however have thought of putting forward her point of view, as this essay confirms. It was part of the bundle of documents she passed to us after moving from Witney to the retirement home in Moulsford – finding, as my Aunt Jane had in similar circumstances some years earlier in Canada, that you’re almost the only one there with two neurones to rub together.

Given that her book TWOI was published in 2014, and that it represented 26 years of research, I’d guess that Freda’s initial mailings to every identifiable Waddell household in Britain must have been in the mid/late 1980’s. I do remember that we received a ‘round-robin’, with an invitation to contact her, at about that time, when we were living in Tilehurst, But shamefully I didn’t reply, assuming that it was some sort of elaborate fraud.

It wasn’t until this website started to incorporate the Family feature, in mid 2012, that she contacted us directly, by email, at about the same time that Gavin Main Waddell made contact by telephone. Both of them were somewhat older than ourselves, and so we used to visit each of them from time to time, Freda in Witney and Gavin in Cheltenham.

A visit to Freda was always fun, and enabled her to expound her theories as to the origins of the surname Waddell, which I thought very plausible and incorporated an eclectic synthesis of them into the OrnaVerum webpage. Eventually she retired to a nursing home in Moulsford, near Wallingford, where we continued to visit until the round-trip from Manchester became too exhausting.

Visits to Gavin, on the other hand, soon started to degenerate into diatribes against the website, and try as I did for a long time, he could never be placated. Eventually, in about 2017, he said I should shut-down the website altogether, and I responded with what the inimitable Jeeves used to describe as a Nolle Prosequi. By that time Gavin too had retired, to a south-coast nursing home, and contact was lost.

Both Freda and Gavin were very keen on the use of heraldry in disentangling complicated family lineages, but I couldn’t help feeling that it was a blunt instrument at best, and anyway one that I couldn’t possibly wield on my own account – nor did I really want to: as I say early on in this website we Waddells, or what’s left of us, are plain folks.

On one particular (mid 2017) visit to Freda, at the Old Vicarage in Moulsford, we had been driven down by our son-in-law Phil, and his mounting astonishment at Freda’s verbal tour de force (lasting a good forty minutes on the subject of Flemish heraldry and its bearing on the surname Waddell) was a sight for sore eyes until, thankfully, tea was announced. But he recovered sufficiently to take a number of very nice impromptu photographs. 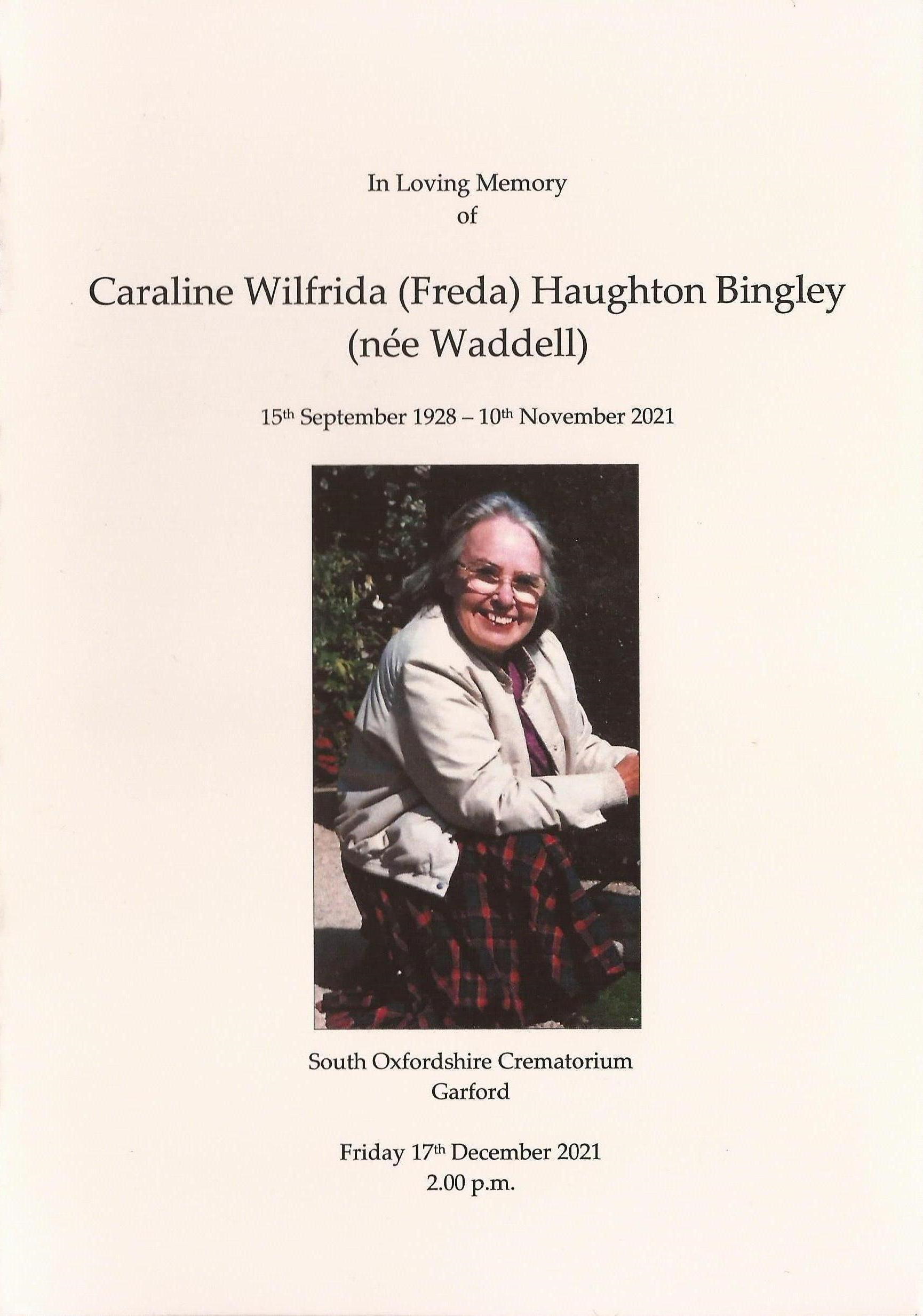 I’m hoping that at least one or two of Freda’s pre-recordings, played at the funeral service, may also become available. She had a most beguiling accent – a mix of mid-Canadian and Northern Irish, softened by decades of her later residence in England. 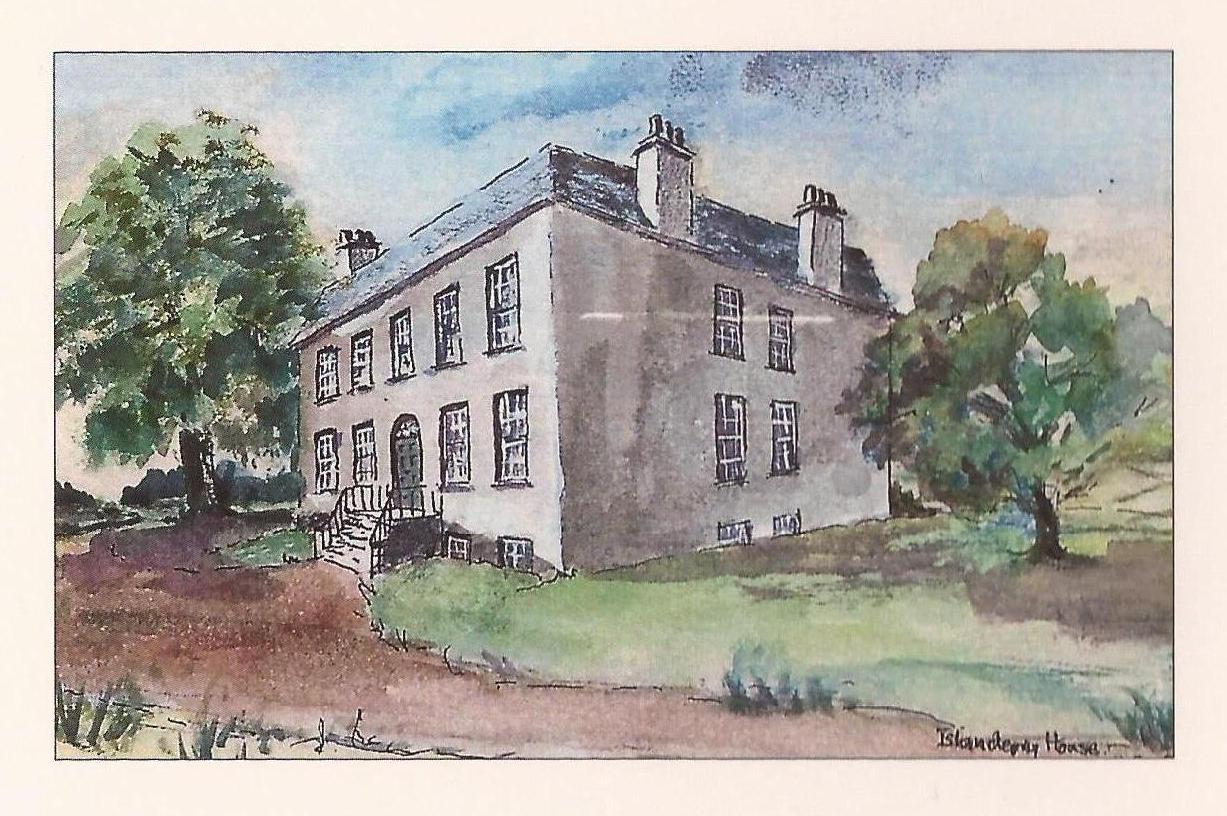 I’m also delighted to see Freda’s watercolour image of Islandderry House, reproduced above from the Order of Service.

As you will have noticed, Freda (one ‘d’) and Martin Campbell (two ‘d’s) diverge on the spelling of the house and indeed the area – I’ve gone with him rather than her, as his version seems to be more commonly used. In fact official documentation from earlier times refer to it as Island Derry (two separate words).