A copy of the Kelvinside Academy1,  2 publication Academicals serving with His Majesty's Forces, 6th edition, dated 9 Mar 1918, has survived and gives Robert's rank as Captain, a military status used in the RFC (which had originated as the air arm of the British Army) but discontinued when the RFC was reconstituted as the RAF less than a month later.

The cover reveals the faint pencil-signature of Edwyn (Eddie) Findlay, Robert's best (maybe only) buddy, evidently not an Academical himself, or else he hadn't been conscripted. He has underlined a number of names, maybe those he knew personally – including Robert himself, who is listed on p36.

Another underlining, on p38, was 2nd Lt Alexander Wingate, a Territorial of the HLI (Highland Light Infantry, renowned as ferocious fighting men), who had been killed on 13 Oct 1915.

He is mentioned again on p42, on the list of those killed, and his name is recorded on the First World War Roll of Honour at the Academy itself. 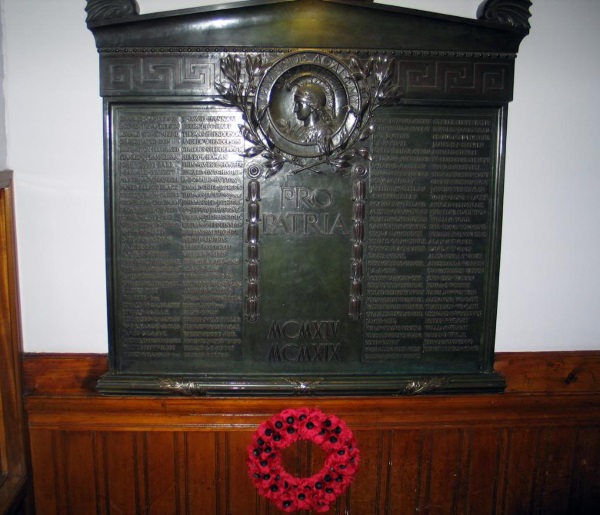 Alexander Wingate had been born in 1875, some eight years earlier than Robert, and so the two of them had not overlapped at the Academy. In 1892, Wingate had become articled to the eminent architect Miles Septimus Gibson and in 1897 he began his very successful architectural career, cut cruelly short by the Kaiser.

Sad indeed, but why the focus on him here? The answer is that I'm inclined to believe that Robert had somehow become acquainted with Alexander in the years prior to 1911, and had admired him, or his work. Perhaps it was the news of Wingate's death that had precipitated Robert's return to Britain and supporting role in defeating the Hun.

And furthermore, why else would Robert have given the names Alexander Wingate to his next-born son?