Family - The Waddells - Andrea Waddell - A Tribute from Sonia

My darling daughter Andrea was murdered on 15th October last year, in her flat in Brighton. (You would expect my brain to have accepted this fact by now, but part of me is still waiting for her daily telephone call – and of course I still think 'I must tell Andrea this, or show her that' at regular intervals.)

Andrea was 29 years old when she died, and for the last 16 years of her life she had suffered considerable ill-health and pain, as a result of scoliosis (severe sideways curvature of the spine, for which she eventually had surgery to partially correct), and fibromyalgia (a syndrome of problems including painful muscles, abdominal problems, sleeplessness and depression). She was born a boy, and also struggled with ambivalent gender feelings, eventually having the gender change operation, after which she became our beautiful daughter, Andrea.

She studied Philosophy at the University of Durham, achieving her BA, and then went on to work for, and attain, an MA in Social and Political Thought at the University of Sussex. (Both universities were amazingly supportive of Andrea, since the constant muscle pain from the fibromyalgia meant that it was often impossible for her to carry shopping or books, stay for long in any one position, or even brush her hair or hold a telephone to her ear.) At this time Andrea also developed acute ulcerative colitis, which was nearly fatal, but she was saved by having her colon removed resulting in an ileostomy (no fun for a young girl wanting to wear pretty clothes). This was reversed a year later, after two further serious operations.

We, as Andrea's family (father, mother and brother) were privileged, in that she would sometimes tell us when she was in pain or depressed – but she never tried to make capital from her condition, and to the world she always showed a cheerful face. She was passionate about animal rights, and I was so pleased to see her described (on one internet site after her death) as a 'vegan animal activist'! But she was also vitally interested in people, and wanted to help anyone who was disadvantaged in life. She knew a number of homeless people in Brighton, and would often take them food – but my son suspects that they probably enjoyed her conversations even more than the things she took them! After her death we were told many tales of how she had helped people. For instance, there was the man she met at a regular demo. outside a Brighton bomb factory. He was lonely, but Andrea took him under her wing and introduced him to many of her friends, and turned his life around. There was the man whose girlfriend of many years had walked out on him; Andrea helped him through the period of pain. There was the woman whom our daughter saw one day in the street, depressed and unhappy – and Andrea took her by the arm and said 'It can't be that bad' and befriended her for ever after. And there was the homeless French girl whom Andrea took into her flat for some weeks. Even at her funeral we heard about the elderly woman who said 'I had to come, she was so kind to my dog one day!'

Andrea's best friend wrote, after her death: 'You were the most dazzling, brilliant and cheeky rebel I ever met. You were funny, intellectual and glamorous. Your philosophy was an eternal source of inspiration for me. I'll try to be more like you: confident, daring, light-footed and refreshing, like a cup of peppermint tea!'

We are so proud of her. We will love her and miss her for ever.

PS The collection at Andrea's funeral was for the Lord Dowding Fund, whose objectives are to support, sponsor and fund better methods of scientific and medical research, without the use of animals. 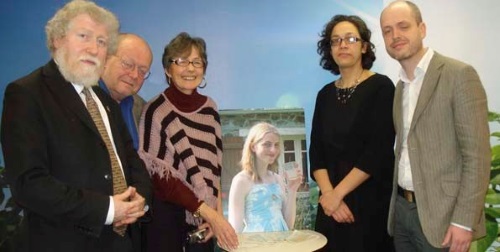 The family of Andrea Waddell, who was murdered in her Brighton home on 15 October 2009, gathered at the Quaker Centre in London last month to present a cheque in Andrea's memory for £1,235 to the lord Dowding Fund. Sonia Waddell of Reading Meeting, a long-serving member on the committee of Quaker Concern for Animals (QCA) said, 'Our daughter was described by friends as intellectual, rebellious, daring, glamorous and funny – and she was passionate about animal rights. Andrea was also vitally interested in and caring of people, always wanting to help someone who was disadvantaged in life. It was a very moving little ceremony, and we know Andrea would have been thrilled at this support for one of her favourite causes.'

Andrea, 29, suffered greatly over many years with a range of serious health problems. She showed characteristic courage in continuing to live life adventurously and fully, graduating in philosophy from the University of Durham and gaining an MA in Social and Political Thought at the University of Sussex.

Sonia, together with Andrea's father Robin and brother Nick, thought it fitting that the collection at Andrea's funeral be in aid of the lord Dowding Fund. The fund's objectives are to support, sponsor and fund better methods of scientific and medical research, without the use of animals. The family will continue to raise funds for lord Dowding in Andrea's name.

Sonia added: 'Andrea's life challenges us all to live for the moment, bravely following our own moral codes and standing up for what we believe in'.

Ann Johnson and Viktoria Nealis are members of the committee of Quaker Concern for Animals.