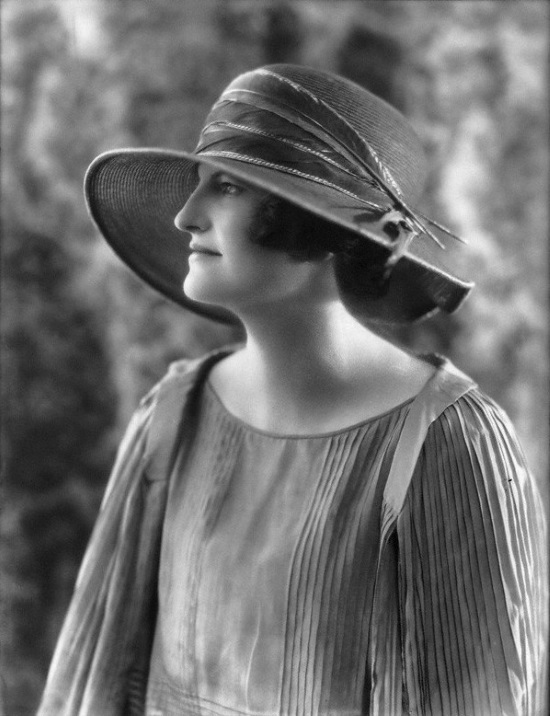 To fully comprehend the highly-charged lifestyle of the upper (OK, moneyed and titled) classes of those days – in fact of any time back to at least the Restoration period – we have to remember that they were the "celebrities" of the time, discreetly chronicled in Society magazines equivalent to Hello! and OK!. Lip-service was still paid to the notions of pre-marital chastity and post-marital fidelity, but everybody down to the humblest reader of the gossip-columns knew that "they" were "at it" like knives (a curious simile).

The hot-house atmosphere of the inter-War years of High Society was stoked by the reaction to the ghastliness of the Great War and the seismic shifts which that had generated in the social structure of England. They were partying on the edge of the abyss, and of course scarcely more than two decades later it duly crumbled.

But in-between-whiles, "they" mostly dutifully fulfilled a useful ceremonial, political and charitable role, and would probably have had little difficulty with admission through the Pearly Gates when the time came.

One such was definitely Nina, Baroness Ravensdale, who was not only a godmother but also in due course a friend and confidante, to Sonia. Some 14 years after the baptism (which had been in Salisbury) she made the arduous journey from London to Bray, somewhat to the north of Dublin, in order to attend Sonia's confirmation. I'm not entirely sure as to whether Nina also served as her exemplar in other respects, but hypotheses non fingo!

Her father George Curzon had been immensely rich, although he spent with lavish extravagance when Viceroy of India (1899 – 1905), and withheld the money that his first wife, who died in 1906, had left in trust to her three daughters. He himself had an adulterous affair with Elinor Glyn1  2 between 1907 and 1916, so in several respects he can hardly have set a good example within the family. He succeeded to the family title and ownership of Kedlestone Hall in 1916, and was created Marquess in 1921. His political career reached its zenith as Foreign Secretary from 1919 until 1924, but he was mortified to be ignored as successor to Andrew Bonar Law, the short-lived Prime Minister who died in 1923.

(As a minor coincidence, in the early 1960's my mother was for several years private secretary in his Lower Sloane Street office of Bonar Law's youngest son Richard Law, aka Lord Coleraine ie 1st Baron Coleraine)

Curzon was generally regarded as haughty, self-satisfied and intensely snobbish. He is said to have been contemptuous of Glyn, and used her as a private indulgence, refusing to consort with her at public functions or on social occasions. As the popular Balliol Rhyme put it,

My name is George Nathaniel Curzon
I am a most superior person
My cheeks are pink, my hair is sleek,
I dine at Blenheim twice a week.

Kedlestone Hall from the front 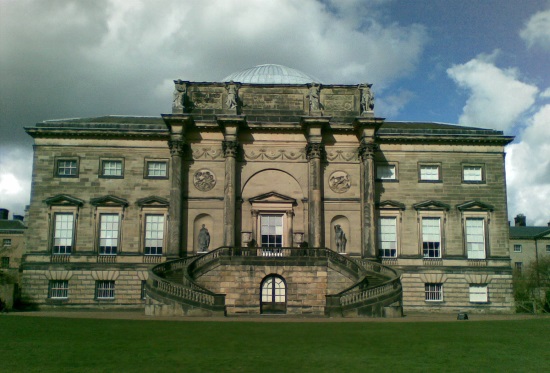 and to the rear (looking a bit grim)

Well, that's enough salacity for the moment, let's examine the family demographics of that era in the Curzon lineage, mostly gleaned from my trusty sources

As we've noticed elsewhere, the upper strata of society have always found it difficult to keep their nether garments securely hoisted if sexual opportunity presented itself (as of course it invariably did). Much the same as most of the rest of us lesser folk, really.

The full story of the many and varied escapades of these high-octane Curzon daughters is recounted in The Viceroy's Daughters by Anne de Courcy.

Cynthia's elder sister Irene had had an affair with Mosley before he got round to marrying Cynthia. During their marriage Cynthia's younger sister Alexandra was a mistress of Mosley, as was, briefly, their stepmother, Grace Curzon. In 1932 he then began an affair with Diana Mitford, whom he eventually went so far as to marry, as we shall see below.

Cynthia herself was in fact far more interested in politics than in serial sex, and was elected as Labour MP for Stoke-on-Trent in 1931, Mosley becoming member for Smethwick. A couple of years later, however, he founded the New Party, which she joined too, and it was only her death from peritonitis in 1933 that prevented her from following his bizarre descent into the political underworld of quasi-military fascism.

In addition to Mosley, Alexandra had also affairs with the bisexual Prince George, Duke of Kent, US Ambassador Jock Whitney, Michael Lubbock, Walter Monckton and Charles Duncombe, 3rd Earl of Feversham, Dino Grandi, Benito Mussolini's ambassador to London, and the Foreign Secretary Lord Halifax (though that might have been wishful thinking on his part).

Irene and Alexandra both eventually immersed themselves in socially useful activities – (eg) the Musicians Benevolent Fund and the Save The Children charity, respectively, gaining Irene a life peerage, and seat in the House of Lords, and Alexandra a CBE.

For several years in the late 1940's and early 1950's, Irene and Diana Mosley (the second wife of Irene's ex brother-in-law Oswald), would rent a house in Glengarriff and bring Diana's children over for their summer holiday – this wasn't far from Ardnagashel of course, and so there was plenty of scope for merry mingling with the Kaulback children.

And during Sonia's early years in London in her late teens, Irene frequently took her around to concerts, galleries, interfaith meetings with the Bahá'í, for example, and introduced her to the great and the good. Very few godparents ever provide a fraction of the support and encouragement that constantly emanated from Irene towards all her numerous brood of godchildren.

BTW, Irene's forename was stressed on the first of two syllables (in the US way), rather than on the second of three syllables (the traditional English way).

One might well ask quite how she came to be Sonia's godmother in the first place – what personal friendship might she have she enjoyed with Audrey – and the answer isn't far to seek. Irene's brother-in-law, "Fruity" Metcalfe was of course the best friend of the Duke of Windsor, erstwhile Prince of Wales, focal point of the glitzy world of High Society before his abdication. And as recently (April 2015) discovered, Fruity featured prominently in Audrey's beautifully-kept photographic scrapbook of those days. And of course in such circles, anybody who was somebody knew everybody.

Indeed, one of Audrey's elder sisters once showed us some letters from HRH, written to her whilst he was on some Empire (Commonwealth) tour or another, complaining bitterly and with scant regard for the rules of spelling, that he was desperately bored and hating every minute of it.§

§ Isaac Newton was of the opinion that the Deity occasionally intervened in the natural course of the solar system, to correct planetary orbits that had been excessively perturbed by the proximity of other planets – he was, needless to say, aware that an inverse square law of gravitation automatically self-heals any minor perturbation of this kind.

IMHO the Supreme Being generally leaves things to work out for themselves, for good or ill, but on a terrestrial plane he might well have ordained the arrival of Wallis Simpson in order to replace the Prince of Wales by the (flawed but thoroughly decent and intensely patriotic) Duke of York as the next monarch.

In connection with which event, it recently (April 2015) transpired that the great-aunt of some long-standing friends of ours had played a major part in the inception of the crisis. This piqued my curiosity, as I'd certainly never heard of her before. Turning to Wikipedia, I began to discover a well-defined sequence of predecessors to Wallis Simpson. And in every single liaison, the utter unfitness of Edward to become monarch at a time of unprecedented peril to Britain, became increasingly obvious. It wasn't the affairs as such, but what they revealed of his deficiencies of character, integrity and, ultimately (as Duke of Windsor) loyalty and patriotism.

There were four major relationships, each segueing into the next (though doubtless there were innumerable minor entanglements along the way). In chronological order:

I make no pretence of bringing anything original to the party – but maybe of nudging three of the protagonists further to the front of the stage than perhaps they were before.

It's noteworthy that only one (Freda) of the four was even partly English: Maggie was French, Freda was half-American, Thelma was mostly American with a dash of Hispanic and Irish, and Wallis was one-hundred-percent American. Perhaps he found them livelier than their English counterparts, perhaps it was just coincidence.

It would be surprising if he hadn't cast at least a speculative glance at the enticingly half-American Curzon sisters – particularly Irene, as she was an enthusiastic member of the Melton Mowbray set frequented by Thelma Furness and the Prince himself.

What however might come as an even greater surprise is that his career as a serial philanderer (following his early fling with Maggie Meller) might have been largely avoided – though it's unlikely that he could ever have been totally uxorious – had his father George V not flatly refused permission for him to marry the beautiful, chaste, serious-minded and immensely rich Rosemary Leveson-Gower with whom he had quite understandably fallen in love.

On the other hand, cynics might quote the dictum that (roughly speaking) a man marries a wife hoping that she won't change her charming ways (but she does) and she marries him hoping that he will change his less congenial ways (but he doesn't).

There is supposedly, in science anyway, a zeitgeist$ effect in which numerous researchers or thinkers quite independently come to the same conclusion almost simultaneously and therefore deserve almost equal credit. But there is also what might be called a gesterngeist effect, in which something is independently reproduced at some rather later date (or even a vorgesterngeist effect ...). We have only to remember the prolonged dispute between Leibnitz and Newton: but though Leibnitz was a decade or two downstream, his version of calculus was adjudged to be notationally superior to Newton's fluxions, so honours were even.

You may guess that an apologia pro scripto meo is in the offing. Well, a month or so ago (Nov 2015) my wife noticed, in the local branch of her bank, a pile of books charitably donated by W H Smiths, amongst which she spotted, and bought, a copy of Michael Thornton's Royal Feud: The Queen Mother and the Duchess of Windsor; Book Club Associates 1986.

A superb book in every respect, very well written, detailed and authoritative. And besides much else, it describes the relationships of Edward Prince of Wales with not only Wallis Simpson but also with Rosemary Leveson-Gower, Freda Dudley Ward and Thelma Furness.

It probably looks as though there was rampant plagiarism on my part, but unless one can indeed tap into the vorgesterngeist like the electricity supply of the flat next door, I have to declare innocence – I'd not even seen a reference to it, and was unaware of its very existence. So neither research, nor plagiarism, but ignorance, Madam, pure ignorance.

And even were it otherwise, historians and lowly chroniclers are (with all due respect) only jackals and vultures at the corpse of some noble, but deceased, higher species – and indeed every generation feasts at the banquet of time, the largesse bequeathed to us by our predecessors.

$ Perhaps this isn't just a metaphysical conceit. There is (or is said to be) a biological parallel, the Sheldrake effect, or morphic resonance, though it's not been talked about much for a good while, in which (to take a popular example) a laboratory rat which learns (by trial and error) to negotiate a maze thereby enables its comrades to learn their way through the maze with significantly greater ease.

It seems to share the same platform as Jung's concept of the collective unconscious, which greatly appealed to me as a teenager – it appeared to explain, or at least harmonise, so many religious and philosophical issues which bothered me at the time. But earning a living and raising a family soon displaced all such idle thoughts.