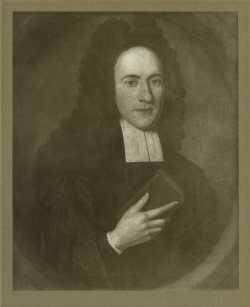 Ralph Erskine [1685-1752] perhaps lacked some of the impressiveness of his brother, [Ebenezer,] yet Robert Mackenzie rightly says of him in his book John Brown of Haddington [Banner of Truth, 1964] that he was '. . . gentler, more ideal, more mystical than his brother, fond of music and proficient on the violin' [p. 70]. Ralph was not one of the original Seceders of 1733 although he had been closely associated with his brother's stand on the 'Marrow' controversy, patronage and the Simson case. However in 1740 when he was finally deposed by the General Assembly, he threw in his lot with his brother and the Associate Presbytery. In 1711 he had been appointed as Minister of the Second Charge at the famous Dunfermline Abbey and in 1716 he became Minister of the First Charge of that Church. That he was a scholar and a theologian of considerable ability can be shown by the fact that his collected Works in ten volumes passed through many editions. Gospel Sonnets, his best known work, was first published in 1734.

Ralph Erskine was the son of Rev. Henry Erskine of Cornhill, Northumberland and later of Chirnside, Berwickshire. Henry Erskine was a Puritan and, as such, was forced to vacate his living at Cornhill under the Act of Uniformity, 1662. One of the greatest successes of Henry Erskine's preaching was the conversion of Thomas Boston. In his turn, Ralph had made considerable study of many of the great commentators, preferring above all Matthew Henry. Among his favourite writers were Owen, Manton, Flavel and Boston. But above all books the one he studied most was, of course, his Bible. His biographer, Fraser of Kennoway could say 'His delight in study was cordial and persevering.'

Ralph was an emphatic believer in the Sovereignty of God as may be seen from the following extract from his diary: 'After I had remembered the public abroad and at home, particularly in beseeching the Lord to bless my ministry at Dunfermline and toremember His word, "Lo, I am with you," and to bless what I was preaching on, even all things being in the hand of Christ, that He would give evidence of it by His working powerfully upon many. I was then helped to beg the Spirit constantly to water and watch me. Under a sense of absolute weakness and inability to stand of myself, I was helped, with a heart poured out before God, to declare to Him that, though He was calling me to wait upon Him, yet I could not wait on Him a moment, unless He would water me "every moment." I was made to seek assistance, success, strength and courage for my work in the congregation, while the Lord called me to the Ministry therein, being conscious that my fainting spirit was unfit for any work, if the Lord would not be with me.'

Ralph Erskine's sermons were always written out in full and, for the most part he kept fairly close to his script during delivery. It is said of him that he had an excellent pulpit appearance, a pleasing voice and a pleasant manner. In particular he was in the habit of making many full and free offers of Christ to his hearers in a persuasive, attractive manner in which he urged them to accept the offer which was graciously made to them on the authority of the Divine Word. Above all, he was a true pastor who knew his people and, as such, he was able-to speak to their particular needs, hopes and aspirations. Like all true preachers, both then and now, he considered his exposition of the Scriptures on Sunday to be the central part of his whole ministry. In the early years of his ministry he expounded the Gospels of Matthew and Mark, the Acts of the Apostles and, later, the themes of the Epistles. Of Ralph Erskine we could certainly say that he was a preacher and a pastor and that, for him, these were not two unconnected functions.

His journals give us ample evidence of his care of and anxiety for his people in sickness, death or any kind of trouble. In matters of discipline too he was dutiful - a minister of such a large flock in Dunfermline could not be otherwise - yet never was he harsh nor vindictive.

Prior to his deposition from Dunfermline Abbey, his followers had begun to build a new church for him. This building was replaced by a larger church in 1800 which is still in use. It is an impressive structure formerly known as 'Queen Street Church' [which is how it is cited by Mackenzie supra cit.] and now as 'Erskine Church'. A very fine memorial statue of Ralph Erskine was placed and dedicated outside the church in 1849 and still holds pride of place.