A SYSTEM OF HERALDRY, SPECULATIVE AND PRACTICAL:

WITH THE TRUE ART OF BLAZON,

ACCORDING TO THE MOST APPROVED HERALDS IN EUROPE:

ILLUSTRATED WITH SUITABLE EXAMPLES OF ARMORIAL FIGURES, AND ACHIEVEMENTS OF THE MOST CONSIDERABLE SURNAMES AND FAMILIES IN SCOTLAND &C

TOGETHER WITH HISTORICAL AND GENEALOGICAL MEMORIALS RELATIVE THERETO 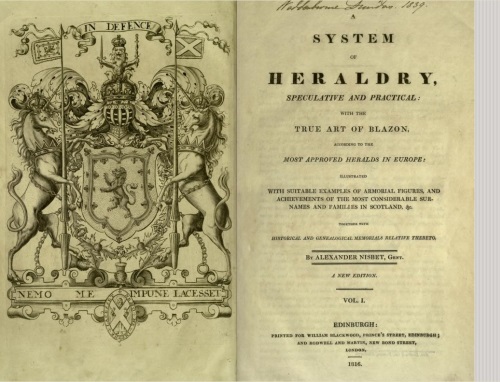 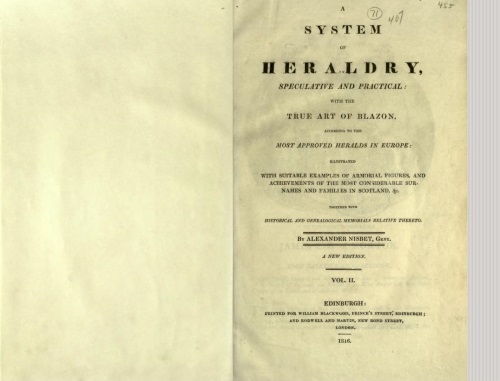 THE PEERAGE OF SCOTLAND: Containing an Historical and Genealogical ACCOUNT OF THE NOBILITY of that Kingdom.

Collected from the Publick Records of the NATION, the Charters and other Writings of the NOBILITY, and from the most approved Histories.

EDINBURGH: Printed for the AUTHOR: Sold by George Stewart, at the Book and Angel in the Parliament-Close. 1716.

THE Nature of this Work seeming to render something of a Preface necessary, I shall, for that Reason, intirely dedicate it to the Service of the Reader, in as few Words as possibly I can.

Having formerly written a short Essay upon the Royal Family of STEWART, to which was prefixed an Historical Account and Description of the Shire of Renfrew: I had no sooner publish'd that little Book; than several Persons of eminent Distinction for their Learning and Knowledge in the Antiquities of the Nation, for whose Judgment I had the most profound Regard, set upon me to write A Peerage of SCOTLAND, a Book very much wanted; which at length, by their Importunity and promised Assistance, I was prevailed with to undertake.

When I first set about this Work, as I did entirely devote and dedicate my Time to the Study of Antiquities, particularly those of our own Country, so I made it my Business to collect all those Historical and Genealogical Tracts that had been done on the Nobility, that I could come to the Knowledge of. The Oldest of that Kind I have met with, was a few loose Sheets on the Genealogies of our Nobility, said to be done by James Lord Ochiltree, in the Hands of my very worthy Friend, and one of our best Antiquaries, Mr. Baillie of Castlecary; but the Accounts even of the few Families that Lord treats of, are very lame; and I observe where he goes much higher than his own Time, they are purely traditional, and therefore I could not depend on them.

I perused also the large Genealogical Collections concerning the Nobility, by Sir James Balfour, who was Lord Lyon King at Arms, in the Reign of King Charles I. but they are written so very loosely, and I have seen them contradicted so frequently by Writs and Charters, that I give them but little Credit. I suppose Sir James never intended these Papers should have gone further than his own Closet, for he was a Learned and Curious Gentleman, as appears from his Annals, in which he is much more exact, especially as to what occurred in his own Time.

I procured likewise a Copy of the Historical Essay on the Principal Families of the Kingdom, Alphabetically digested, by the learned Lord Advocate, Sir George Mackenzie of Rosehaugh; but I apprehend these Papers have been only some first Draught of a greater Work Sir George intended, which he lived not to finish: Of this there are many Copies in several Hands, the most exact by very far of any of them I have seen, was that which I had the Use of from Thomas Crawfurd of Cartsburn, my Brother, who by his own Reading and Knowledge in the Antiquities of the Nation, has rectified a great many of Sir George's Mistakes, at least of his Amanuensis, and has with great Accuracy, embellished his own Copy with a vast deal of fine Historical Remarks, that it well deserves the Character of a curious Manuscript.

I had moreover a Sight of the Genealogies of the Nobility, collected by Mr. Dunlop, the late Principal of the College of Glasgow, who was Historiographer for Scotland, a Gentleman of great Integrity and Learning, and an excellent Antiquary. I understand he intended to have written A Peerage of SCOTLAND, and for that End made very full Collections on that Subject: But I observe that most of Mr. Dunlop's Accounts are composed of those Genealogical Descents that the Nobility have in their own Families, and are handed about by their Friends; and that ingenious Gentleman did with great Accuracy and Judgment, add Historical Memoirs to the Genealogies, which give them a great Ornament; and he is very exact as to his Authorities. The M.S. was communicated to me by my very worthy Friend, Mr. Dunlop, the present Professor of Greek in the University of Glasgow, the Principal's Son.

But after I had made all those Collections I have mentioned, and a great deal more of that Kind, I cannot stay to particularize, I found I had not any tolerable Foundation for the carrying on the Work I had undertaken, for the Honour of the Country, (the Design it was principally for) or my own Reputation; and therefore, by the Advice and Direction of my ingenious Friends, who had engaged me in the Design, I did with as much Humility and Modesty as I was Master of, address every Peer by myself or some Friend, for the Assistance of their own Charters and Writings, to enable me to do their Families Justice in this Undertaking.

Such Helps as I sought were very generously afforded me by the greater Part of the Nobility, who allowed me the Perusal of their Charter-Chests and original Writings, from which I composed the Accounts of their Families as they stand in my Book. Severals indeed I did not see; some were unwilling to shew their Family Writs for divers Reasons, some were Minors, others were Abroad, and out of the Country; and even to such I have done all the Justice was possibly in my Power. But if the Accounts of such Families, whose Charters I have not had Access to, be shorter and less connected than others, that was what cannot be supposed I could help: I took Care timeously to advertise every Body concerned, and if they did not incline to shew me their Writs, the Blame cannot be laid on me.

But that I might be the better able to carry on the Work I had undertaken with Advantage, and to form Accounts of those noble Families whose Writs I had not seen, and to supply, if a Hiatus did happen, (as it frequently did) in such Families whose Writings I had perused I searched all the Publick Offices and Libraries about Edinburgh, and noted every Thing as exactly as I could; and the Keepers of these Offices were so obliging as to allow me Access at all Hours, ordinary and extraordinary, whenever I call'd, and to whom therefore I do, with all due Gratitude, return my most humble and hearty Acknowledgments.

But after all my Labour, I am so far from being so vain as to imagine this Essay is not capable of any further Improvement, that on the contrary I am sensible, I have, thro' Inadvertency, and the Errors of the Press, especially in Dates and Proper Names of the present Age, fallen into many Mistakes; but I beg the ingenious Reader will pardon these Omissions, which are inevitable in such Books, and where he discovers an Error, he will correct it with his Pen.

Perhaps some may think, that I have been fuller upon some Families, (even some that are extinct) than on others who are much more ancient than those I enlarge more upon. The Reason is plain, the Representatives, Relations, or Descendents of those noble Families shew'd me their Writs, and encouraged my Design. If others had done so, I doubt not but I should have been able to have done them as full, and vouched them as well. For I can say, and do here declare on the Word of a Gentleman, That I had no Regard in the doing of Justice in my Province as an Author, to the Encouragement I received from any Man, otherwise than to reckon myself very much obliged to such; and I own I did not spare either Time or Pains to discover any Particular, I thought could give an Ornament to the Antiquity, or a Lustre to the Honour of their Families.

But where I have been assisted from the Publick Records or Authentick History, I have been as full on those Families who never incouraged the Design, as I have been upon those who gave me the greatest Assistance every Way; and for the Truth of this, I can and do appeal to severals of the Nobility themselves, who will find very long deduced, and well vouched Descents of their Families, in this Peerage, who never encouraged my Undertaking in any Degree. But as I said before, That I had had no Respect to; for my chief and only Regard was, and shall be Truth, and the Honour of our Country, as far as I am capable to discover the one, or defend the other.

As to the Work it self, I shall say nothing: But after so great Labour, and Expence of Time, the Essay (being new and never before attempted) how defective soever it may be, I cannot but hope, will meet with a favourable Reception from the Ingenious, and more particularly have the Approbation and Countenance of Persons of Distinction, who frequently read such Books, and know how useful and acceptable Undertakings of this Kind have ever been accounted in all the Polite Nations of Europe.

Quarterly 1st and 4th Azure, a Bend betwixt Six Cross-Croslets, Or, 2d and 3d Argent, a Pale Sable supported on the Dexter by a Lyon, Gules, and on the Sinister with a Griffin Proper. Crest, a savage Hand, holding a Cutless, Motto, Je Pense plus. 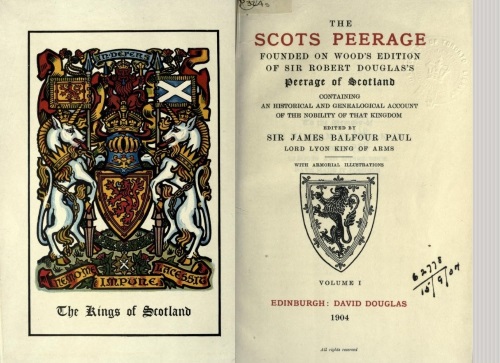 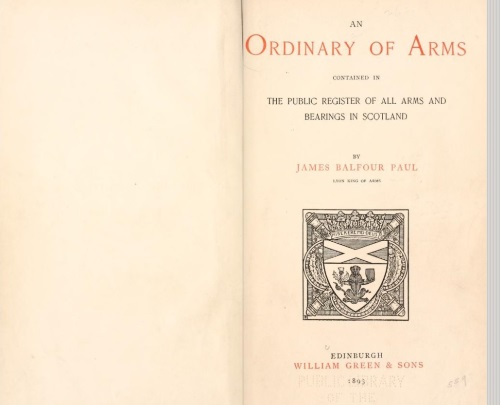 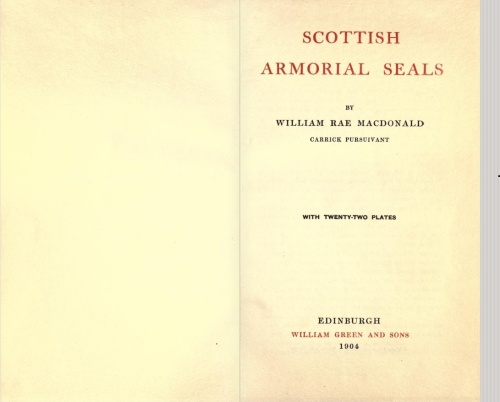 (for John Erskine of Dun, for example, the index gives p 109 for On a pale a cross crosslet fitchée)