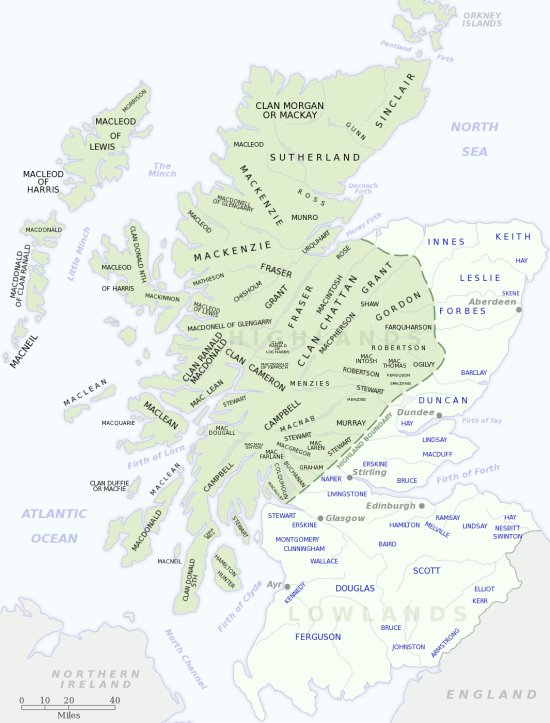 Over the past couple of years I've been assured by people "who know about these things" that clans are Highland, are led by Chieftains or Chiefs, and are identified by tartans, whereas families are Lowland, are led by Earls or Dukes, and are identified by coats of arms. So lowland families couldn't belong to clans, and earldoms such as the Erskines of Mar, or of Kellie, or Mar & Kellie, just wouldn't have tartans.

But like (some of) the things that you're liable to read in the Bible, it ain't necessarily so.

So it can be seen that, all along, the words "chief" or "head", and "clan" or "family", are interchangeable. It is therefore quite correct to talk [for example] of the MacDonald family or the Stirling clan. The idea that Highlanders should be listed as clans while the Lowlanders should be termed as families was merely a 19th-century convention.

I had to shake off this Old-Think and accept the plurality of things. One should make things as simple as possible, but not simpler. There's a quite a few very useful articles in Wikipedia which help to dispel confusion:

Originally, every clan had a hereditary chief, possibly with subordinates (chieftains) who headed subsidiary septs of the clan. Until the mid-eighteenth century every chief, and his coat of arms, was registered with the Lord Lyon. Since then however, many clans have lost their chief for one reason or another – as for example, Clan Blackadder (yes, there really is one) – and such clans are called (counter-intuitively) armigerous.

Today Clan Blackadder does not have a chief recognised by the Lord Lyon King of Arms, therefore the clan has no standing under Scots Law. Clan Blackadder is considered an armigerous clan, meaning that it is considered to have had at one time a chief who possessed the chiefly arms, however no one at present is in possession of such arms.

But in every case (as far as I understand it), there either is, or was at one time, an undifferenced coat of arms associated with every clan, and it is these arms which provide the basis for the so-called clan crest:

A sign of allegiance to a certain clan chief is the wearing of a crest badge. The crest badge suitable for a clansman or clanswoman consists of the chief's heraldic crest encircled with a strap and buckle and which contains the chief's heraldic motto or slogan. Although it is common to speak of "clan crests" there is no such thing. In Scotland (and indeed all of UK) only individuals, not clans, possess a heraldic coat of arms. Even though any clansmen and clanswomen may purchase crest badges and wear them to show their allegiance to his or her clan, the heraldic crest and motto always belong to the chief alone. In principle, these badges should only be used with the permission of the clan chief ...... Scottish crest badges, much like clan-specific tartans, do not have a long history, and owe much to Victorian era romanticism, having only been worn ....... since the 19th century

The other popular form of personal identification with, and loyalty to, a particular clan is the wearing of a kilt or sash woven with the so-called clan tartan, but here too one must be cautious!

Originally there appears to have been no association of tartans with specific clans; instead, highland tartans were produced to various designs by local weavers and any identification was purely regional, but the idea of a clan-specific tartan gained currency in the late 18th century and in 1815 the Highland Society of London began the naming of clan-specific tartans. Many clan tartans derive from a 19th-century hoax known as the Vestiarium Scoticum. [This] was composed by the "Sobieski Stuarts" who passed it off as a reproduction of an ancient manuscript of clan tartans. It has since been proven a forgery, but despite this, the designs are still highly regarded and they continue to serve their purpose to identify the clan in question.