The White Family and Bantry House 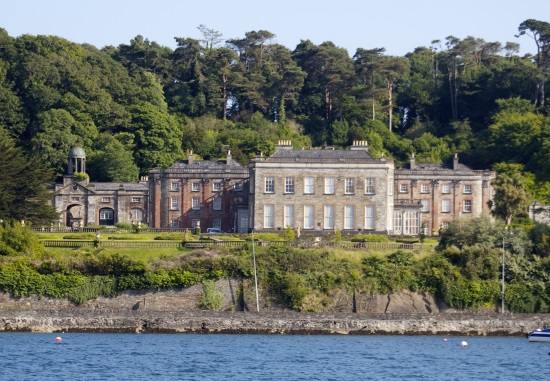 Bantry House seen from the Harbour

Even if you read nothing else in this Connection, I beseech you to read Irish Aesthete for an excellent account of the family history, an appraisal of the appalling prospect of much of their heritage of furniture, paintings and objets d'art being auctioned in Oct 2014 in order to pay off bank loans and keep this wonderful mansion open to the public, and a great many unique photographs of its wondrous interior.

Even the most ardently egalitarian, republican, anti-imperialist amongst us would, I suspect, admire the massively magnificent portrait of King George III (and another of his delightfully wacky consort Queen Charlotte), for example, that will be going under the hammer. Art like this just doesn't happen any more: 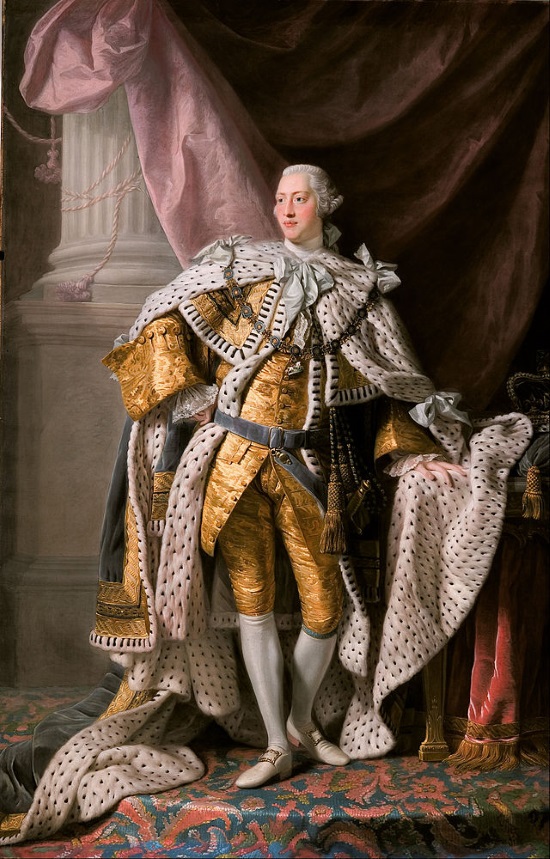 Those who have already seen the Hutchins & Ardnagashel link will recollect that Bantry House was originally known as Blackrock, and was built by Samuel Hutchinson in about 1720. It was subsequently sold to Richard White in 1755 ± 11, who renamed it Seafield House. Only in 1816 (as far as I recall) did it become known as Bantry House.

Over the next half-century, especially after the 2nd Earl got into gear following his Continental Grand Tour, it was greatly enlarged and elaborated, so much so in fact that the Earls themselves often preferred the less formal milieu of "Lord Bantry's Cottage", nowadays known as Glengarriff Lodge, the hunting lodge built in 1815 by the 1st Earl, in the awesome area now designated as the Glengarriff Nature reserve. 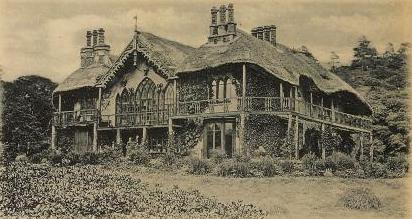 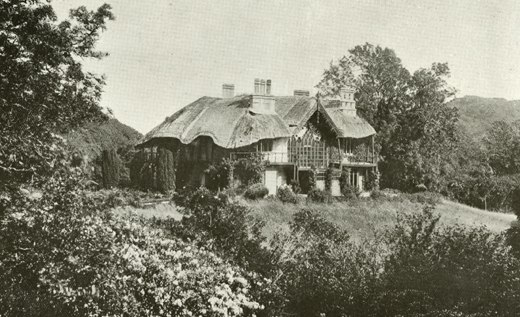 And coincidentally, whilst her parents were waiting for Ardnagashel House to be renovated after the Second World War, my wife remembers a lengthy sojourn In Glengarriff Lodge (and also, less favourably, the Eccles Hotel), a magical place, with first-storey balconies running the length and breadth of the house, which itself was filled with all kinds of stuffed animals and other curiosities and treasures.

But time and chance wreak havoc with our memories, or rather, with the erstwhile realities that they represent. The Lodge has now successfully reached its second or even third reincarnation. 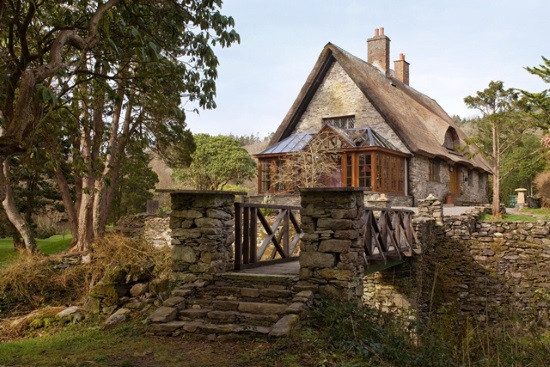 Apart from the information readily available from the family gravestones in Bantry's Abbey Cemetery, I've been heavily reliant on the following websites for details of the White family history tabulated below: 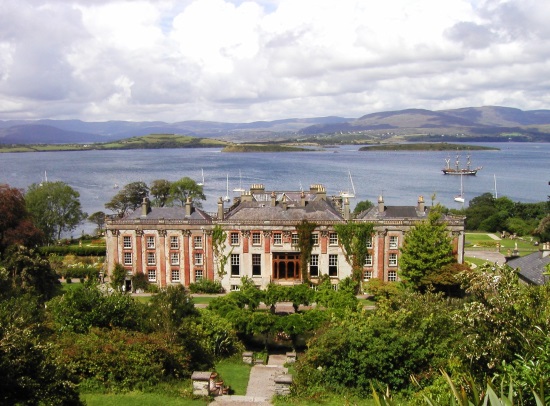 Rear aspect of Bantry House and view across the bay

As follow-ups to the Irish Aesthete link above, please click below to see various accounts of Whiddy Island, Bantry, the White family and Bantry House from earliest times up to the present day.

Probably due to some law of physics, every human enterprise or institution carries within itself the seeds of its own decline, downfall or destruction. Every career ends in failure, absolute or relative. Every human being has their individual Achilles heel. And their telomeres, to dictate how much more or less than three score and ten they are destined to survive. Organisations definitely seem to have some analogous tipping point at which they rapidly unravel – we've probably all heard about that list of the 100 largest US corporations in 1900, all of which had ceased to exist by the end of the 20th century.

Family dynasties are no exception. Rags/clogs to rags/clogs in four generations are familiar generalisations. Perhaps the "law" of Reversion to the Mean is at work, though that's extremely unfair to those individuals who fight a heroic rearguard action against the forces of economics, barbarism or infertility. Think of those now almost forgotten Roman generals in the dying days of the empire who held (for a while) the encroaching hordes from the north and the east at bay.

But calamity can be averted – cometh the hour, cometh the man (or of course woman). After Neville Chamberlain died, there were two candidates for UK leadership – Churchill, who got the job as any fule kno, or the cheese-eating appeasement-monkey Lord Halifax. Churchill's emotive oratory is usually given credit for his ultimate success, but his private mantra whenever all seemed lost was "KBO" or "Keep Buggering On", and of course it did actually work, eventually!

Getting to the point, what was it about the Earls of Bantry and their near-contemporaries the almost equally successful Hutchins family that gradually eroded their wealth and prestige? During the middle and later parts of the nineteenth century, both families sold-off large parts of their considerable estates in order to keep their finances in the black. Eventually, there was little left to sell, and they had to retrench.

To quote from the Irish Aesthete once again:

Over the preceding century or more, Bantry's resources had been steadily depleted. It is clear that the second earl's lavish expenditure on the house was not without consequences: in November 1853, over 33,000 acres of the Bantry estate were offered for sale in the Encumbered Estates Court, and a separate sale disposed of Bere Island. The following year more than 6,000 further acres were sold, again through the Encumbered Estates Court. Nevertheless in the 1870s the third earl still owned 69,500 acres of land in County Cork. Within decades most of this had gone: by March 1916 Edward Egerton Leigh-White had accepted an offer from the Congested Districts' Board had been accepted for 61,589 tenanted acres of the estate. What remained was thereafter sold until a mere hundred acres remained. Meanwhile the vast house continued to demand large sums to be spent on its maintenance, money that could only come from the gradual sale of its contents.

And as I've mentioned infertility, what was it about the last Earl of Bantry and his successors that militated against male offspring?

A digression is in order. A mile or two offshore from Bantry is Whiddy Island, of course, famous for the richness of its soil – mainland farmers used to swim their horses and cattle out there each spring to fatten them up on the lush grass that grew there. There are also several much smaller islands in between – Chapel Island, Horse Island, Hog Island and Coney Island (and somewhere or another the Maccurragh Rock, which sounds rather barren). Coney Island was legendary for its plump rabbits, needless to say.

Chapel Island is categorised navigationally into East and West, joined by some sort of spit probably visible only at exceptionally low tides. The island as a whole lies pretty well in the line of sight from Bantry House to Whiddy East. And there is evidence of a ruined chapel or shrine there ...

The story as my wife recounted to me decades back, was that the chapel had been levelled on the orders of the 4th Earl, who allegedly felt it spoilt his view. Little did he know or care that an aged local woman (whether from Whiddy itself or from Bantry by rowing boat) regularly prayed at the chapel, and was so angered by its destruction that she laid a curse on the White family that they should have no male heirs for three generations.

And nor did they? The 4th Earl, William Hedges-White, had no son; his successor Edward Leigh-White had no son, and his successor ... well, it doesn't seem to work, or else I've got the table badly wrong. Oh dear, maybe the story isn't really true after all.

There was, and in all probability still is, rather more to the White family tree than appears in the usual layout as tabulated above – more roots, in fact, and more branches, and once again the internet has lots to tell us.

The trail starts in the Paddy O'Keeffe notes about Whiddy Island cited above (he was also involved in investigating the layout of the graves in Garryvurcha Graveyard as mentioned in the Hutchins Connection). On p5 of these notes, one may read: 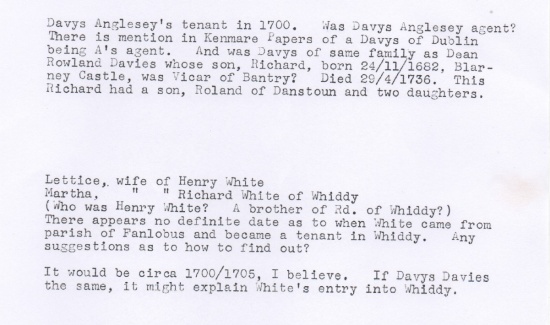 A google of Lettice White then rapidly unfolds the following background for Counsellor Richard White's wife Martha Davies, who we now see to have been grand-daughter, rather than daughter, of Dean Rowland Davies:

And then another of those serendipitous googles that I mentioned earlier produced a second, entirely unexpected, connection with Martha Davies: 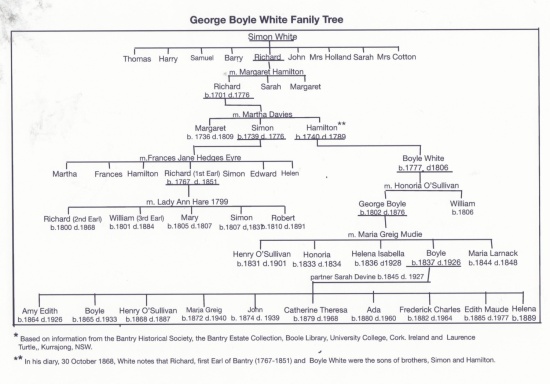 This gives a much fuller picture of the earliest generations in the White family tree – the amendments are coloured in red for clarity – though Counsellor Richard White hasn't gained a sibling Henry for Lettice Davies to marry. Perhaps she married his Uncle Henry?

Some interesting information about the family background of Margaret Hamilton has recently come to light and will be elaborated on when time permits.

Also most interesting is the line of descent from Hamilton White – particularly his grandson George's adventurous career in the early colonial Australian outback.