Periodic Table of the fundamental particles

It's certainly not periodic, and it's not really a table, more a roll-call of uneasy bedfellows, whose allegiances are to three disparate theories of physics - quantum chromodynamics (QCD, quarks), quantum electroweak dynamics (QED, leptons) and General Relativity (gravitons maybe ...)

I cannot pretend to understand the underlying mathematics of it all. 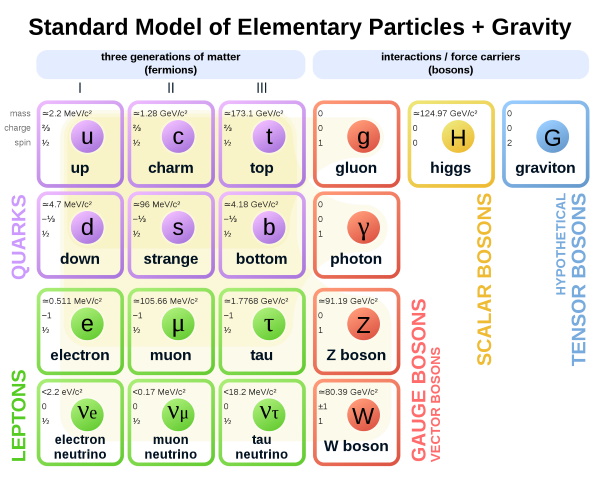 I'm not going to say much, because I hardly understand it all myself. But it's very important to stress that these are just the fundamental particles – there are myriad composites that aren't represented here (baryons such as protons and neutrons that comprise three quarks and mesons that comprise two quarks).

I'd very much appreciate any corrections or improvements to the summaries provided below.

There are 3 generations (I, II, III) of fermions
Each generation comprises 2 quarks and 2 leptons

Note that, as foreshadowed above,

and according to the rules of spin are therefore fermions.

And note likewise that

Mesons comprise one quark and one antiquark

and according to the rules of spin are therefore bosons.

Photons and gravitons travel at the speed of light ('luminals'), as the forces that they mediate are long-range, and we are aware of their effects as they control extra-nuclear processes

Gluons, W± and Z particles travel at less than light speed ('sub-luminals', 'tardons'), as the forces that they mediate are short-range, but we are unaware of their effects as they control intra-nuclear processes

The designation of bosons as scalar, vector, or tensor, reflects their particular symmetry properties

Note that matter particles listed can also be categorised by the fundamental forces that they experience.

All particles (except possibly the neutrinos, if they are truly massless) feel the gravitational force

Particles, such as quarks and composites of quarks (such as mesons, protons, neutrons), that feel the strong force are called hadrons

Leptons such as electrons, muons, tau(on)s feel only the electromagnetic force and the weak force

Neutrinos feel only the weak force

Note also (though irrelevant to present purposes) that

As established by theory and experiment, every type of charged particle (whether fermion or boson) has an antiparticle of opposite charge. Neutral particles are their own antiparticle, so to speak, except for neutrinos and antineutrinos which have opposite chirality ("God is a weak left-hander").

It's all rather reminiscent of the proverbial Wild West Zoo

Most importantly, every single fundamental particle in the Standard Model is intrinsically point-like, of no measurable size whatsoever. And this is of course what one would expect from 'my' previous a priori argument. Spatial extension is an emergent property – just as tables and chairs could in principle be squashed to an unimaginably small, but still finite, agglomeration of atoms, these could in principle be deconstructed into a collection of quarks and leptons comfortably housed in a Euclidean point.

The quarks, leptons and bosons of the Standard Model are point-like particles. Every other subatomic particle ... is an extended particle. The most familiar are the protons and neutrons that make up the nucleus of an atom, but there are many others ... the defining feature of [which] is that they have a reasonably measurable size (which happens to be about the size of a proton).

The situation is complicated, as any satisfactorily simple situation always is, as per Mencken ("for every complex problem, there is a solution that is simple, obvious, and wrong") and Einstein ("everything must be made as simple as possible, but no simpler"), by the uncooperative complexity of empty space itself, first predicated by Dirac, that the Democritan void is teeming with submerged entities that manifest themselves as virtual particles with a lifespan inversely proportional to their energy, that surround real particles and, so to speak, smudge their lipstick and impose a finite effective size upon them.

Indeed there is worse to come sizewise, with the advent of theories (entirely unsupported by high-energy experiments as far as I know, ie not very far) that the really fundamental cosmic entities are not necessarily points (zero-dimensional) but strings (one-dimensional) and [mem]branes (multi-dimensional). IMHO, this is merely a mathematicians' fantasy playground, of enormous complexity, and no empirical reality. Talmudic or Scholastic, take your pick. But to me, none of this really matters – it's all mathematics rather than avoirdupois, and has no bearing on my belief that what we experience in everyday life as 'material', principally size and inertia, is just an emergent property, an epiphenomenon, compounded from unimaginable squillions of utterly immaterial entities as specified by the Demiurges that I humorously (?) introduced rather earlier on.

But the more genuinely complicated it becomes, until only Ed Witten and Roger Penrose really understand it all, the greater respect I have for Creator Mundi.

There seem to be two distinct modes of quantisation available to material systems:

It's not really for me to speculate why - though cleverer people than me know, they don't let on – but I suspect it all depends on symmetry principles.

But there are also ancestral voices prophesying the possibility of quantised space and time, and luxuriating in the bath this morning (Nov 2019), I started to wonder what the units might be, and how they would be related to Planck's constant (h).

It's easy to choose the names of the units concerned, but somewhat harder to reconcile them. For time, the obvious unit is the 'chronon', from the Greek (Chronos). For space. however, it's not so obvious – perhaps 'salton' or 'modon' from the Latin (saltus = leap or modus = measure), or 'metron' from the French (metre).

The fundamental units of space and time, call them what one may, also have to conform to the speed (c) of light in vacuo, as well as Planck's constant. Planck himself, at the turn of the twentieth century (how recent that sounds), was one of the first to suggest such possibilities, so I think I have nothing further to contribute, except to quote the so-called Planck units of length, time and speed

and emphasise that these are not necessarily irreducible quanta of the variables concerned!

Lastly, the etymology of the particle names so far encountered is quite interesting and, on the whole, helpful.