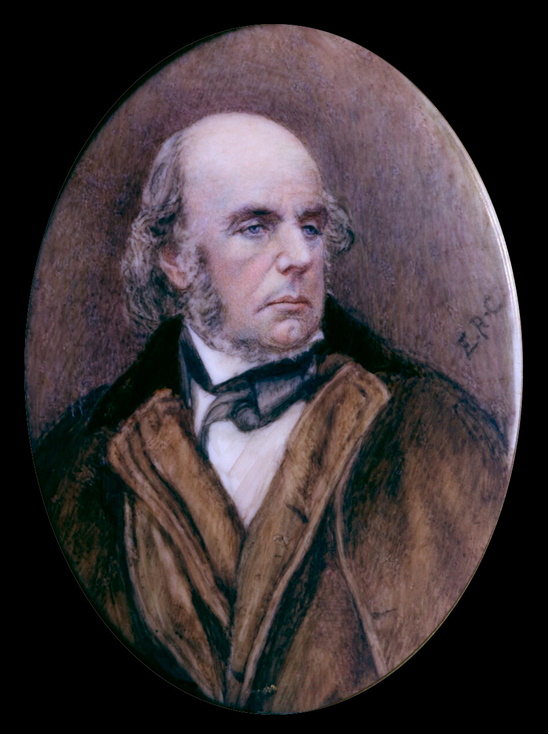 FITZGERALD, EDWARD (1809–1883), poet and translator, born at Bredfield House, near Woodbridge, Suffolk, on 31 March 1809, was the third son of John Purcell, who, on the death of his wife's father in 1818, took the name and arms of Fitzgerald. In 1821 Fitzgerald was sent to King Edward the Sixth's Grammar School at Bury St. Edmunds, under the charge of Dr. Malkin. In 1826 he entered at Trinity College, Cambridge, and took his degree in 1830. He made life-long friendships with his schoolfellows, James Spedding and W. B. Donne, and with his college contemporaries, W. M. Thackeray, W. H. Thompson, afterwards master of Trinity, and John Allen, afterwards archdeacon of Salop. The three brothers Tennyson were also at Cambridge at the same time, but he did not know them till a later period. With Frederic, the eldest, he kept up a correspondence for several years, and the laureate dedicated to him his poem 'Tiresias,' but, as Fitzgerald died just before it was published, their long friendship is further commemorated in the touching epilogue. Carlyle was a friend of a later date, but firm and true to the last. Fitzgerald spent the greater part of his life in Suffolk. His youth was passed at Bredfield, where he was born, and where he lived, with the exception of a short sojourn in France, till about 1825. His home was then for some time at Wherstead Lodge, near Ipswich, till 1835, when the family removed to Boulge Hall in the adjoining parish to Bredfield, and for several years Fitzgerald occupied a small cottage close by the park gates. Here his chief friends were George Crabbe, the son of the poet and vicar of Bredfield, and Bernard Barton, the Quaker poet of Woodbridge, whose daughter he afterwards married. He had no liking for the conventional usages of society, and was therefore somewhat of a recluse. But he was by no means unsocial, and to those whom he admitted to his intimacy he was the most delightful of companions. His habits were extremely simple; his charity large and generous, but always discriminating; his nature tender and affectionate. He lived at Boulge till about the end of 1853, and then settled for a time at Farlingay Hall, an old farmhouse just outside Woodbridge, where Carlyle visited him in 1855. About the end of 1860 he went to live in Woodbridge itself, taking lodgings on the Market Hill, and there he remained till, at the beginning of 1874, he removed to his own house, Little Grange, which he had enlarged some years before, and where he continued till his death. His chief outdoor amusement was boating, and the great part of each summer was spent in his yacht, in which he cruised about the neighbouring coast. But he gradually withdrew from the sea, and after the death of his old boatman in 1877, the river had no longer any pleasure for him, and he was driven to console himself with his garden. On 14 June 1883 he died suddenly while on a visit at Merton Rectory, Norfolk, and was buried at Boulge.

Beyond occasional contributions to periodical literature Fitzgerald does not appear to have published anything till he wrote a short memoir of Bernard Barton, prefixed to a collection of his letters and poems, which was made after the poet's death in 1849. In 1851 was issued 'Euphranor, a Dialogue on Youth,' which contains some beautiful English prose. In 1852 appeared 'Polonius: a Collection of Wise Saws and Modern Instances,' with a preface on proverbs and aphorisms. Both these were anonymous. In 1853 he brought out the only book to which he ever attached his name, 'Six Dramas of Calderon, freely translated by Edward FitzGerald,' but the reception it met with at the hands of reviewers, who did not take the trouble to understand his object, did not encourage him to repeat the experiment. He consequently never issued, except to his personal friends, the translations or adaptations of 'La Vida es Sueño' and 'El Mágico Prodigioso.' These translations never professed to be close renderings of their originals. They were rather intended to produce, in one who could not read the language from which they were rendered, something of the same effect as is conveyed by the original to those familiar with it. On this principle he translated the 'Agamemnon' of Æschylus, which was first issued privately without date, and was afterwards published anonymously in 1876. A year or two before his death he completed on the same lines a translation of the 'Œdipus Tyrannus' and the 'Œdipus Coloneus' of Sophocles. But the work on which his fame will mainly rest is his marvellous rendering of the 'Quatrains' of Omar Khayyám, the astronomer poet of Persia, which he has made to live in a way that no translation ever lived before. In his hands the 'Quatrains' became a new poem, and their popularity is attested by the four editions which appeared in his lifetime. But when they were first published in 1859 they fell upon an unregarding public, as heedless of their merits as the editor of a magazine in whose hands they had been for two years previously. His Persian studies, which were begun at the suggestion of his friend, Professor Cowell, first led him in 1856 to translate the 'Salámán and Absál' of Jámí. After this he was attracted to Attar's 'Mantik-ut-tair,' and by 1859 he had made a kind of abridged translation of it, which he called the 'Bird Parliament;' but it remained in manuscript till his death.

Fitzgerald was a great admirer of Crabbe's poetry, and, in order to rescue it from the disregard into which it had fallen, he condensed the 'Tales of the Hall' by liberal omission and the introduction of prose in place of the more diffuse narrative in verse. The preface to these 'Readings in Crabbe,' in which he pleaded for more attention to a neglected poet, was the last work on which he employed his pen.

An edition of his collected writings, with selections from his correspondence, is now (1889) in the press, under the editorship of the writer of this article.